Sixers' attendance highest it's been since before Iverson was traded

If you haven't been down to the Wells Fargo Center to catch a Sixers game this season, you're missing out.

Sure, there are still the occasional weeknight Embiid-less games against middling teams with no real superstar that remind you this team still has some work to do before they can be considered destination-viewing on a daily basis.

But more often than not -- certainly more often than during the first few years of The Process or any other season since the team traded away Allen Iverson early in the 2006 season -- the games are actually close. And the team is fun to watch.

After being outscored at home by an average 13.4 points in their first five home games -- they were all losses, two of them by 25 or more -- the Sixers have competed in nearly all 17 of their home games since. They've gone 8-9 at The Center over the last two months (dating back to Nov. 11) and have been outscored by just 2.4 PPG.

And win or lose, as long as it's not the second night of a back-to-back, you'll get to see Embiid, which alone is worth the very reasonable price of admission -- $10 gets you in the door for Wednesday's game against Kyle Lowry and the Raptors.

Some games, you don't even have to wait for tipoff for the fun to start.

That's why, despite the fact that they're still near the bottom of the Eastern Conference standings, fans have been coming out to watch the Sixers in numbers that haven't been seen since 2011-12.

Not only was that the last time they made the postseason, but also the regular season was shortened to 66 games (33 home games) because of the lockout, meaning there were fewer chances for fans to and check out a game. Naturally, that would lead to more fans attending each game, but fewer total fans over the course of the season.

When it comes to 82-game seasons, however, the 2016-17 Sixers are drawing their biggest crowds in over a decade. 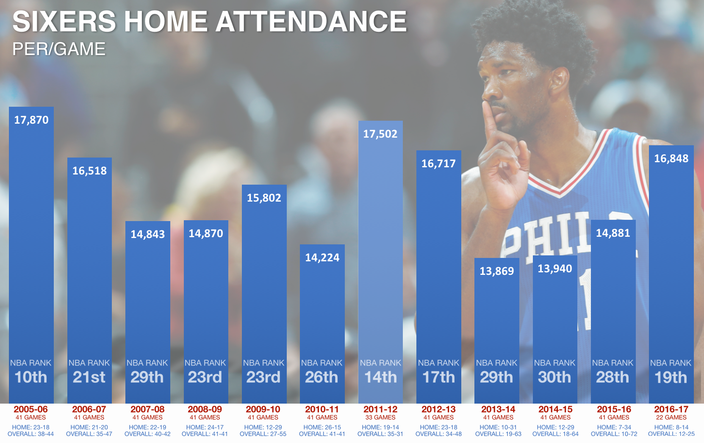 And here's a look at those numbers in table format, with the percentage of possible seats sold as well:

Heading into play Saturday night in Washington, the Sixers had won five of six, including three straight. And the best may be yet to come with the return of No. 1 overall pick Ben Simmons looming in the not-so-distant future.

If the team is able to keep winning -- and Embiid's playoff proclamation suddenly starts to look more prophetic and overly optimistic -- there's no reason to think the Sixers won't improve on these attendance numbers.

They're currently 6.5 games out of the eighth and final Eastern Conference playoff spot, but with 43 games left to go after Saturday (20 at home), there's still plenty of time gain some ground.