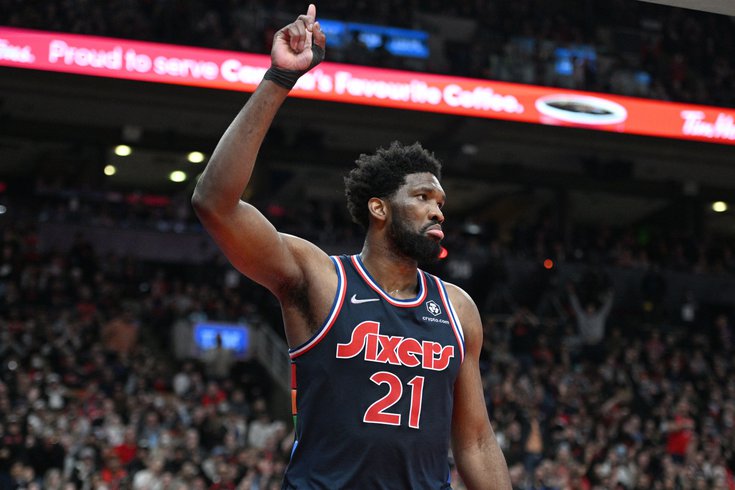 Joel Embiid and the Sixers will face Boston to kick off the 2022-23 NBA season on October 18.

The 2022-23 NBA schedule will be released in full Wednesday at 3 p.m., but leaks are already giving us a good look at how things are going to play out.

Per The Athletic's and Stadium's insider Shams Charania, the Sixers will ring in the new NBA season October 18 in Boston with a primetime matchup against the rival and Eastern Conference champion Celtics on TNT.

- 76ers at Celtics
- And as previously reported: Lakers at Warriors

Then, two nights later on October 20, the Sixers will host the Milwaukee Bucks at the Wells Fargo Center, also reported by Charania.

This gives us three known marquee matchups for the Sixers so far, as it was already revealed Sunday night that they will be back on the annual Christmas Day slate with a matchup against the New York Knicks at Madison Square Garden.

Additionally, the NBA already confirmed Tuesday that no games will be played on Election Day November 8.

Instead, all 30 teams will play the day before on November 7, using their platform to encourage fans watching to get out and vote along with emphasizing the importance of civic engagement.

Teams will also use the couple of months leading up to the midterm elections to distribute info on their respective state's voting process and registration deadlines.

"[The decision] came out of the NBA family's focus on promoting nonpartisan civic engagement and encouraging fans to make a plan to vote during midterm elections," the league said in a statement on Tuesday.

The NBA today announced that no games will be played on Election Day, Tuesday, Nov. 8, 2022.

The scheduling decision came out of the NBA family’s focus on promoting nonpartisan civic engagement and encouraging fans to make a plan to vote during midterm elections. https://t.co/nFiEHlws0Q

And while the league has usually scheduled around certain dates in the past, like Thanksgiving and Christmas Eve, for example, staying clear of Election Day is a first, albeit an unsurprising one.

Back in 2020, numerous NBA players and other professional athletes led or took part in voting initiatives in response to racial inequality and police brutality sparked heavily by the police-involved deaths of George Floyd and Breonna Taylor, as well as the police shooting of Jacob Blake.

Multiple team owners also volunteered to convert their arenas into polling places, the Wells Fargo Center being one of them as the Sixers and Comcast (which own the building alongside the NHL's Flyers) both made the space available to the city. The city, however, declined the offer.

The NBA's move to stay clear of election day and encourage fans to vote in the time leading up is a sensible next step.

As for the rest of the Sixers' schedule, that will be known in just under 24 hours.

Philly, you ready to ball? pic.twitter.com/UEsGdiDaM6