Instant observations: Sixers' defense lets them down in loss to Clippers 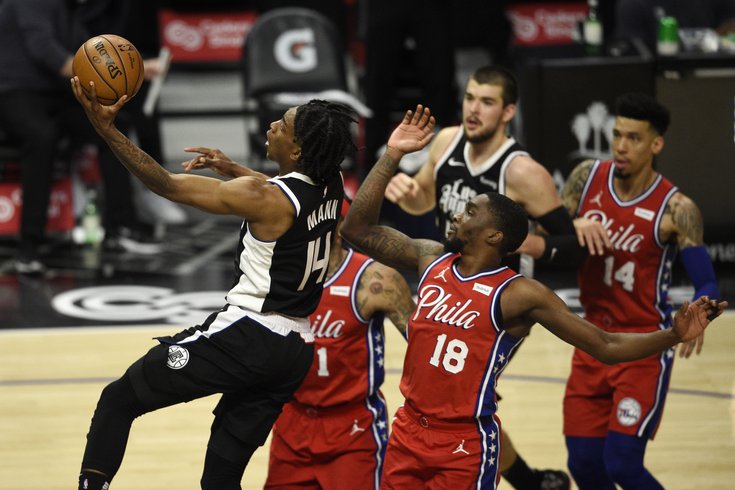 LA Clippers guard Terance Mann goes up for a layup past Philadelphia 76ers guard Shake Milton (18) during the first half.

The Sixers were beaten pretty soundly by the Clippers on Saturday night, dropping their second game in L.A. by a margin of 122-112. Outside of another strong effort from Tobias Harris and the continuation of Danny Green's hot streak, not a whole lot to like in this one.

• Tobias Harris may have thrown the single-best pass/made the single-best read I have ever seen him make in the first quarter of Saturday night's game. Drawing all the attention to himself in the paint with a drive, he rose up, never looked Danny Green's way in the corner, and nonetheless hit him with a last-second dish in the hands, allowing Green to rise up for a wide-open three.

That alone shows you the sort of groove he's in this season. Harris is adding new tricks to the bag seemingly by the game, and with what he already has to pull from, he's becoming a very difficult guy to stop under Doc Rivers.

He didn't exactly need anything new to fry the Clippers on Saturday night. Harris went to the mid-post well over and over again during a sensational first half, using spin moves and shoulder fakes and excellent body control to create just enough separation for a made shot. When you consider the defenders he scored a lot of those points against, it was an even more impressive effort — putting buckets on Kawhi Leonard and Paul George is a tall task for anyone, and Harris made it look easy.

With Rivers giving him more reps in pick-and-rolls, Harris has also had an easier time hunting matchups he wants when the moment calls for it. You could hear Rivers yelling at Danny Green from the sideline during a first-half sequence, demanding that he set a screen for Harris so he could get Terrence Mann on him in the mid-post.

Here's the only downer — the Sixers didn't get Harris the ball a whole lot out of halftime, and they suffered for it.

• Let the record show Danny Green and his post-break shooting are appreciated by this writer on this website. His efforts were mostly wasted on Saturday night, but another tip of the cap to the wily veteran.

• We have offered up a lot of praise for the Sixers and how they've held up on defense without Joel Embiid, but this felt like the first game where his absence really showed. They were probably fortunate not to give up more points on the night — the Clippers got to almost anywhere they wanted, and some iffy shotmaking was the only thing holding them back.

There were a multitude of problems for Philly in this one. Ivica Zubac was a problem on the offensive glass early, extending possessions and bailing the Clippers out of their missed shots in the first quarter. Fighting through traffic was a bigger problem than it usually tends to be, forcing the Sixers to be a more switch-heavy team than they usually are with any assortment of players on the floor. When a guy like Terrence Mann goes off for 13 points in a half (on his way to a season-high 23 on the night) and gets anywhere he wants on the floor throughout the game, you know things are going poorly.

And there's always the fact that, well, the Clippers are pretty damn talented on offense. The right matchup was going to catch up with them eventually, with Kawhi Leonard and Paul George taking advantage of size, speed, and strength mismatches when they came their way.

One big issue: Mike Scott is just not cut out to be the nominal center for Philly. He actually had some decent defensive possessions in the paint early on Saturday night, but as the game wore on, his issues with positioning and his lack of length to contest shots at the rim caught up with him, leading to some bad breakdowns. In fairness to him, however, the Clippers toyed with some small ball of their own, and asking a non-center to defend Nic Batum in the corner and be the free safety at the rim is quite a lot.

Considering their decision to give Paul Reed a real NBA contract over the weekend, I was a bit stunned we didn't see more of him on Saturday night. Maybe Rivers thought the full-strength Clippers were a bit much for him — they didn't exactly play the real Lakers the other night — but he had more of a chance to impact the game defensively than Scott.

• Let me just add a bullet point to emphasize how useless Mike Scott was in this game, which is not especially out of the ordinary for him over the last two seasons. The hope has to be that he fades from the rotation sooner than later.

• Let's start with the good for Dwight Howard — he did an excellent job playing like the biggest guy on the floor on the offensive end. He mixed it up on the glass as he always does, and his free-throw shooting was much better than it has been throughout his career, with Howard almost putting up double-digit points at the free-throw line.

Regular readers know I am a fan of Dwight Howard's activity and willingness to mix it up, but his self-belief got the better of him at times on Saturday night. He is at his most dangerous offensively when he keeps things simple and sticks to what he's good at, which is decidedly not when he's rejecting a handoff and trying to attack off-the-dribble in isolation from the three-point line.

(To Rivers' credit, he yanked Howard immediately after one particularly egregious possession early in the second quarter, which did not seem pre-planned. That's one example of a thing that may not have happened last season, at least with a veteran.)

Howard followed that bit of goofy behavior with his second straight ejection, which I can't imagine the head coach is going to be happy with. Even if the officials had a quick whistle on Saturday (to say the least), Howard clearly didn't show much sense to mouth off with a whistle-happy group. Hurting your team in a game where they were already down bodies and bigs is just unacceptable.

• Putting a Simmons-Milton-Thybulle-Scott-Howard lineup on the floor was, to be nice to Doc Rivers, really something. It is a lineup that I wish to never see again.

• If you listened to Daryl Morey's trade deadline presser, the Sixers seem to know they need to cut down on the roles for the non-defenders in their rotation. Reading between the lines, I have to wonder if that will impact Seth Curry, who at his worst is a pretty harmful defender who might get exploited in matchups with the league's elite teams.

Los Angeles' run to open the third quarter was predicated on two things primarily: hunting Curry and paying attention to where Scott was on the floor. The Curry part of that equation is much more troublesome for the Sixers, who need his floor spacing even more desperately when their MVP candidate returns to the lineup soon.

George Hill may not hop into the starting lineup right away, or perhaps even at any point between now and the end of the year. But I have a sneaking suspicion he's going to get the call over Curry when it matters most in playoff crunch time, unless Embiid's return is able to keep Curry on the floor all by himself. Stay tuned.

• One of the major positives of Embiid missing time (if there are any) has been the time Philadelphia has committed to using Simmons as a roll man. Sure, it's not something he can do on a full-time basis in the best version of this team, but they have found a way to use him that gets him going a bit as a scorer and still allows him to take advantage of his passing ability. Getting him downhill without having to self-create goes a long way toward unlocking his game.

Unfortunately, Simmons being that active in the screen game had an unfortunate side effect against the Clippers. Caught trying to put a little extra emphasis into his screens, Simmons fouled out of Saturday's game with plenty of time to spare, leaving the Sixers short another guy in the rotation after Howard's ejection. I love how physical Simmons is when he's coming to separate his teammate from a defender, but officials are clearly looking for missteps from him.

• Let's end this section on a positive-ish note — the Sixers have mostly taken care of business without Embiid, so they bought themselves a slight cushion to drop one of these without it killing them in the standings or sending the fanbase into hysterics. You never celebrate or excuse a loss, but they haven't had many clunkers lately, and this one was semi-understandable.

• Boy, you can always tell when Tony Brothers is officiating a game, and I do not mean that as a compliment in any way.

I'm going to be completely honest with you, I don't know if this is how the rule is supposed to work, but whether it's human error or a function of a goofy rule book, this is pretty bizarre:

So the Clippers challenged, the officials not only ruled it wasn't a foul on L.A. *BUT ALSO* a foul on the Sixers, and they still lost the timeout for the challenge? How?

Never go full Tony Brothers. There were 19 fouls called in the third quarter alone, and if the NBA is worried about the way ratings have trended over the last couple of years, the way the game is officiated is something they might want to look closer at.