Sixers' Colangelo failing to prove he's any better than Hinkie

In Year 1, he's exhibiting the worst qualities of his predecessor ... and none of the good ones 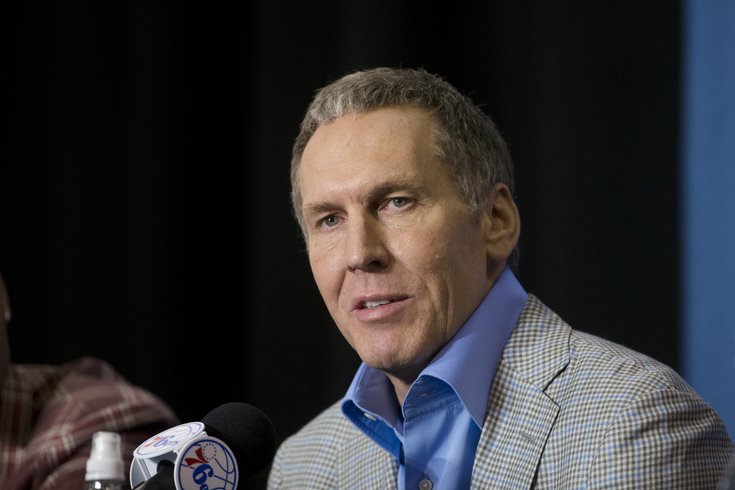 As the first year of the post-Sam Hinkie era in Philadelphia nears the all-star break, two questions – Why was Sam Hinkie forced out and why is Bryan Colangelo the right person to take over the Sixers? – have transformed into a singular, more encompassing question.

Is Colangelo any better than Hinkie at running an NBA team?

That includes talent evaluation, salary cap management, contract negotiations, all of it. Obviously, the more experienced Colangelo has the better resume and last name. But he hasn't done much of anything since his arrival in Philadelphia, at least not in the way the team tried to sell the fanbase when they hired him as president of basketball operations in April.

Essentially, Colangelo has displayed all the worst qualities for which he criticized Hinkie while failing to display any of the ones that made the former GM an ultimately tragic figure.

Colangelo was supposed to bring a Rolodex filled with rival GMs with whom he's spent decades building relationships, thus fixing a league-wide reputation that the Sixers felt had been damaged by Hinkie. Instead, he's made a few minor trades, including acquiring Ersan Ilyasova and a first-round pick for Jerami Grant, and signed stop-gap players like Gerald Henderson, Jerryd Bayless and Sergio Rodriguez.

Hinkie, whatever his reputation around the league, never had trouble making a deal around the trade deadline, and often came away on the winning side. Colangelo, on the other hand, has looked totally inept in his handling of Jahlil Okafor and Nerlens Noel, leaving the Sixers scrambling for a trade partner with a week left before the deadline.

Colangelo was also supposed to be more transparent and forthcoming with injures. After sitting on the information that rookie center Joel Embiid had a partial meniscus tear for weeks – and making up a bogus HIPAA excuse in the interim – the Sixers GM was forced to come clean on Saturday night after Derek Bodner broke the news.

If the nonexistent timeline given for first-overall pick Ben Simmons is any indication, Embiid's return to the court will likely happen at some point this season. Or it won't. Either way...

Hinkie may not have been the most available general manager, but neither has Colangelo to this point, only poking his head out once every couple of months to address the latest controversy created by his own mismanagement. In December, it was regarding Nerlens Noel's comments about being taken out of the rotation. This past week, it was to address the Embiid injury.

Both times, Colangelo came away looking worse than he did before.

As for the actual improvement of the team he runs – and there has been, by any measurement, improvement – much of that can be credited to "Hinkie guys" who were here before Colangelo. And if Simmons turns into a hall of fame player, the credit for that pick belongs as much to previous regime as it does to the current one. Sure, Colangelo made the pick, but without the tanking that so disgusted him and his father, Jerry, there's no guarantee they'd be in the position to draft him in the first place. Plus, Hinkie could've just as easily done the same thing on draft night.

Perhaps we're being too tough on Colangelo. The best may be yet to come.

After all, the Sixers are eventually going to need to add some veteran talent through free agency, the kind that will complement the players already on the roster. Whereas Hinkie spent most his time shipping veterans off in exchange for "assets," Colangelo will soon get a chance to do the opposite.

And when the time to sign those difference-making free agents does arrive, Colangelo may very well be the better basketball mind to have at the helm. He's probably a better pitch man than Hinkie, but the team isn't there quite yet. They're still building – it's a process, remember.

By then, however, Colangelo's ability to sell the Sixers as a destination – and use those relationships he's built up around the league to the team's advantage, as promised – will be secondary to how close the team is to actually contending. They'll have plenty of salary cap room, at least one generational talent in Joel Embiid, new world-class facilities, and play in a major market with plenty of basketball history.

With those things already in place, how much of a difference will the GM's name actually mean to a free agent if a team has the pieces help him get a ring? Not much.

For the Sixers, many of those pieces have come – and will continue to come in the form of previously acquired picks or pick-swaps – compliments of Hinkie's maneuverings before he was usurped by House Colangelo.

And because history is written by the victors, it will be Colangelo receiving the praise should the Sixers land a prize free agent in an upcoming offseason, even if the biggest reasons behind the signing is directly related to the assets collected or cap space created by a previous regime.

So why, then, did the Sixers feel the need to move on from a Hinkie-led front office just at the point many believed the multitude of "assets" he collected over the years were about to blossom into on-court talent?

In short, the Sixers themselves no longer trusted the process he had been selling since Day 1.

It seems funny now – not chocolate-milk-from-the-nose funny; more like the urn scene from "The Big Lebowski" – given what's transpired in the year-plus since Colangelo came on board. Suddenly, the Sixers are once again trusting Hinkie's process.

They call him... The Process. pic.twitter.com/aGWtRFYS8t

Sadly, the former GM isn't around to enjoy it.

Making that comedy even darker is that the guy currently occupying Hinkie's old office hasn't given any indication he'll be any different in the areas he was so quick to point out as chinks in his predecessor's armor.

Say what you will about Sam Hinkie the general manager, but at least he had a plan. A philosophy. A mission statement. A credo. Something around which he could operate confidently, always knowing the endgame.

As for Colangelo, it's hard to point to any one moment since he was hired and say, "You know what? That's why they hired him. Hinkie never would've been able to do that."

Not yet, at least.

With the trade deadline rapidly approaching – and potential Jahlil Okafor suitors dropping out as we speak – we'll finally get to see just how adept Colangelo is at the one thing for which Hinkie was almost universally praised: getting value at the deadline.

He may still be in his first year at the helm, but the clock has to be ticking already. After all, Hinkie was given just two and a half years before Jerry Colangelo was hired to the newly created position of chairman of basketball operations. Six months later, his son Bryan was taking over and Hinkie, well, he was gone.

His process, however, lives on in the form of Embiid and the other assets-turned-players who helped the team to its first 10-win month in years in January. So if Colangelo's tenure in Philly lasts longer, it will likely be due to the Sixers' success resulting from the core Hinkie put in place.

And that's the dark irony here.