What to watch for in pivotal Sixers-Heat Game 4 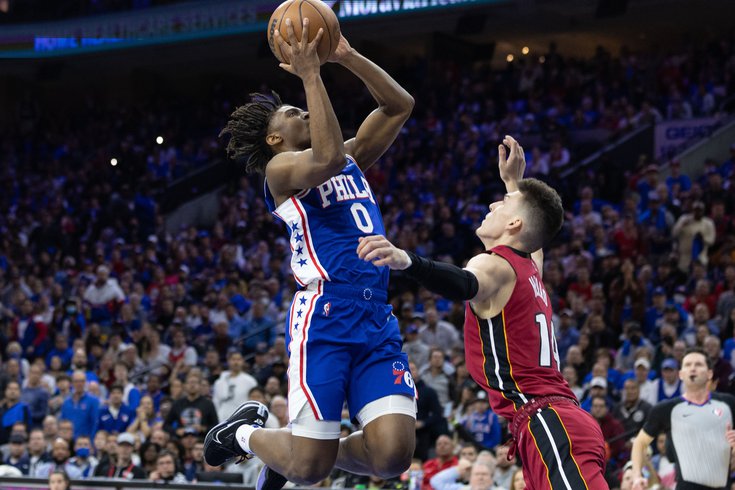 Can the Sixers keep their momentum going into Game 4?

Friday night was filled with joy in South Philadelphia, the Sixers finally on the floor with their best player alongside them again. But a win in Game 3, they've been quick to point out, is far from the end of the job and no reason to go overboard in celebration.

“It’s 2-1. If you can’t be focused now? I mean, honestly," Doc Rivers said at practice Saturday. "Of course, we’re focused and they are, too. You have to anticipate they’re going to play better, but we know that we can play better as well.”

Edge and intensity are a given for this Heat team, with PJ Tucker showing that better than anyone in Game 3. The wily veteran swung his elbows, mixed it up with Sixers players, and toed the line between physical and dirty for much of the second half, sending a message that Miami wouldn't be punked even if they ended up losing big. But those factors are not what will ultimately decide a pivotal swing game in this series.

Bringing Embiid back was an "adjustment" in itself, changing the composition of Philadelphia's backline. That blew up a lot of what Miami wanted to do with starting center Bam Adebayo, and the Sixers put the squeeze on sixth man Tyler Herro as well, trapping him in the backcourt to force the ball out of his hands. Both players saw their effectiveness dip in Game 3, but the Sixers were not totally satisfied with their coverage even still, Herro getting free for a few clean looks due to breakdowns in coverage.

“We still keep losing him,” Rivers said Saturday. “We showed [it] again today. This guy can hurt you. We should never lose sight of him. It’s like in high school playing zone and they have that one kid that can shoot and the high school coach is yelling, ‘There he is! There he is!’"

Defending Jimmy Butler, on the other hand, has proven to be a tall task for Philadelphia even with Embiid on the back end to challenge him at the rim. Butler's decrease in three-point efficiency and volume has made him a more predictable player in the halfcourt as he moves into his mid-30s, but he has remained effective with the ball in his hands thanks to his elite understanding of how to use his body and get to his spots. In a series with two elite free-throw creators on Philly's side of the battle, Butler is up there with either at creating and selling contact, willing himself to the line in order to get himself going.

Early in the Game 3 defeat for Miami, Butler was cold along with the rest of Miami's roster, only coming to life as a scorer once the second half began. The Sixers believe that keeping Butler down on hustle and energy plays will loom large in their fight to stop him after Butler sustained his scoring there despite starting cold from everywhere else on the floor.

"He got a lot going in the first half just by hustle plays, offensive boards, cutting behind the defense," Harris said. "In the second half, I just thought too many times he was able to get downhill in some pick-and-rolls and isolation situations. It's something we have to stay on top of to make his looks hard, he's always going to come with that competitive nature and high energy... we can't let him get those hustle points and a lot of those energy plays, because that fuels their whole group and team."

There are execution-based things to sort out with Butler to be sure, particularly when Miami turns to him as the roller rather than the ballhandler. Having him as the roller in just about any action ensures that Joel Embiid won't be in it, either forcing Embiid to help over if he finds the gap or leaving Butler to attack a pedestrian group of defenders otherwise. A couple of times on Friday, Embiid was slightly late to get to Butler's space, the big man concerned about leaving Adebayo, and that moment of hesitation is all Butler needs to find the gap.

Perhaps the most important variable in Game 4 comes down to another guy who missed Game 1 and Game 2. One of the reasons the Sixers were able to have so much success playing drop coverage was a result of Kyle Lowry's reluctance to be a pull-up shooter turning the corner. Lowry might not have the volume to match some of the league's elite offensive guards, but at his peak he was a ready willing shooter out of just about every look. Friday night, he took just two shots in each half, dumping the ball into Adebayo rather than taking a decent look for himself.

Lowry never really tries to turn the corner here before dropping it off for Adebayo, who has the Embiid wall in front of him. If Lowry gets a little friskier as a shooter, it'll stretch the Sixers out a bit more and put Embiid's lungs and legs to the test after a brief layoff. Anything that makes the Sixers move a bit more works in favor of Miami.

And you can expect the Sixers to back to what worked in the Game 3 win on Friday, namely the double stagger screens that freed up Harden and opened up options all over the floor in the second half. Unless Embiid takes a massive leap forward between games, it shouldn't be expected that he'll come out and carry the offense himself as he has so many times this season. The good news? The Sixers feel comfortable using him any which way, so long as he has stamina to be his best self.

"I thought early on, Joel got some really deep post ups, I think as the game went on and he wasn't running as much, he didn't get as many," Rivers said. "We want to get back to getting more of the early deep post-ups. There clearly are things we don't see yet with the mask. But the one thing he said vision wise, I had pretty good vision out there, and that was good to hear."

Tyrese Maxey, on staying aware of Joel Embiid's health situation: “I just asked him a couple of times, like, are you okay? You promise you’re good? End of the day, basketball is extremely important to all of us and it’s our job, but you want somebody to be the best they can possibly be feeling in life in general. I don’t want him to be in any type of pain or anything…but like I said, he’s a soldier. I mean I think he played, 36 minutes. That was huge for us.”

What a nice kid.

I'm not sure why we go through this charade with the Heat guys every day, but I'm not a doctor, so I suppose I have to leave this to the professionals.

This was the big headline for a lot of Sixers fans this morning, and I do think it's problematic that fans hear Foster's name and nearly always have some sort of visceral reaction. But I'm less convinced that it's definitely a bad thing for the Sixers, as there are a couple of competing forces to sort through here.

For one, in my estimation Foster has always been the crew chief of the "extend the series" crew, and the Sixers are the team playing out of a hole right now. That advantage for Philadelphia will compete with James Harden's inability to win playoff games officiated by Foster, which I would also argue is an overstated phenomenon. Yes, Harden has a bad record in Foster games, but if there's a guy who he is actively biased against, it would be Chris Paul, and Harden was a teammate for a handful of those losses that make the stat seem worse than it actually is.

But let's just take this down to the most basic level of thought. What would the motivation be for the NBA to conspire against the Sixers via reffing assignments in this spot? It's a compelling series that has been closer than each final score has suggested, and the team in a much bigger media market trailing 2-1 just had their MVP candidate center return for Game 3. The two teams split the season series and were only separated by two games in the standings in the regular season despite a lot of funkiness for both of them. There's the Lowry hometown kid angle, the Butler facing off against his old team angle, and plenty of compelling storytelling to do if they so choose.

Frankly, even though I participate in the ref debate by writing these things about the officials, I am sick to death of the amount of whining being done about officiating in these playoffs, not just by Sixers fans but fans all across the league. Put on your big boy/girl pants and suck it up. It's the playoffs. The players decide the games.