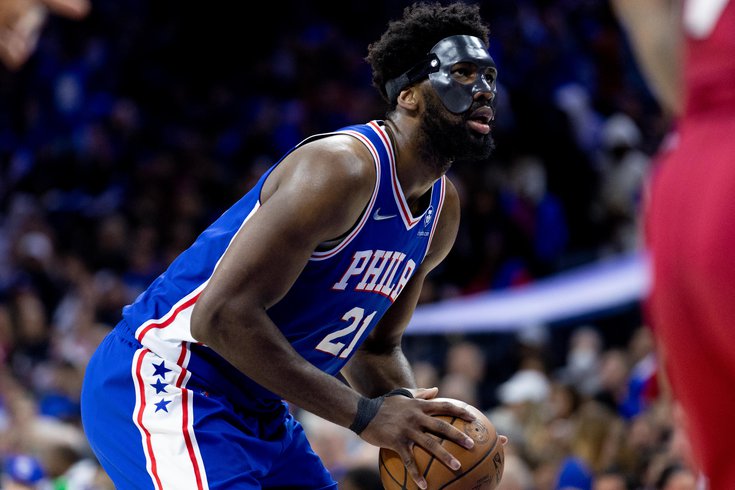 Joel Embiid does not let pain sideline him.

In case Joel Embiid needed anyone to remind him of the list of injuries and ailments he's dealing with, Tyrese Maxey made sure to list them all at the podium after the Sixers' Game 3 win over Miami. And he did so while saving a joke for the big man.

“I just asked him a couple of times, like, are you okay? You promise you’re good? End of the day, basketball is extremely important to all of us and it’s our job, but you want somebody to be the best they can possibly be feeling in life in general. I don’t want him to be in any type of pain or anything…but like I said, he’s a soldier. I mean I think he played, 36 minutes. That was huge for us.”

Who could argue with that assessment on any front? The big man, in spite of a relatively quiet line by his standards, was massive for Philadelphia. And though the home crowd was amped for his return, showering him with cheers and "MVP" chants whenever they had the opportunity, you could sense some nerves and anxiety early in the game, palpable uncertainty of whether he should be out there or not.

For Embiid, that was never much of a debate, at least as long as he could get cleared by the doctors. He believes the Sixers have an opportunity to do something special still in front of them, and he does not believe he is putting himself at risk by going out on the floor and playing.

"It was a struggle," Embiid said, "really because of the concussion and dealing with a bunch of symptoms. But I'm glad it went away and I'm glad that I'm back."

"I really want to win, and I feel like we have a big chance to win it all. Obviously, we got to stay healthy and we all got to play well at the same time. We all got to be damn near perfect. So to me, that's what I signed up for, and whatever it's going to take [for] me to win, that's what I'm going to do...down 2-0, I had to do really everything possible to be out there no matter, how much I was feeling. I'm just glad that we got the win."

A cursory glance at the box score doesn't do much to explain the impact Embiid had on this game. For all the adulation he received this year after leading the league in scoring, Embiid's greatest playoff impact has almost always come at the defensive end.

With Marc Gasol giving him fits during their 2019 battle with Toronto, Embiid's ability to lock down the paint and defend a forward in Pascal Siakam was a massive part of hanging with the champs for seven games. Embiid doesn't like people to forget about that defensive impact — his big stated goal coming into the league was to win a Defensive Player of the Year award, the thought being that he might not ever be good enough to compete for MVP trophies.

Watching from home, Embiid said he couldn't help but notice the impact Bam Adebayo had through the first two games of this series, doing a little bit of everything (and doing it to anyone) with Embiid unavailable to play. Embiid's return coincided with Adebayo crashing back to Earth — Miami's DPOY candidate finished with nine points on 2/9 shooting, three rebounds, five fouls, and a -22 in the box score.

Sitting back in drop quite a bit, Embiid was able to wall off drivers and then close the space to Adebayo all night, either forcing a miss or preventing an attempt in the first place. Adebayo, who has springs to spare, appeared hesitant to go up in Embiid's airspace by the end of the game, allowing his counterpart to put an exclamation point on the win with a huge block:

Setting aside Jimmy Butler's big night, Embiid's ability to serve as a wall on the back end made it a lot more difficult for the Heat to generate offense, and that was cited as the key to victory by almost everyone on Philadelphia's side who spoke after the game.

"He's a huge factor even when he's not scoring," Danny Green said Friday. "It's a big difference when he's guarding Bam and able to limit him a little bit, and also being able to switch on Jimmy and guard different guys. To be able to block shots, rebound, and do those things defensively."

"He's the anchor, he knows all the coverages, and he's talking to us," Maxey said. "He's seven-foot one, he's a big body down there, it's hard to go in there and drive into him, and he makes it difficult for the opposing team. We really do appreciate him for that."

"I've said it all year, you could see his timing was off a little bit, but his presence defensively, I don't think he gets enough credit [for] how good of a defensive player he is and how much he helps us," Rivers added.

Embiid insisted Friday that the defensive focus for him is in part by necessity. The big man noted he doesn't feel he needs to see everything in order to have an outsized impact there, whereas his vision matters more on offense as he tries to knock down shots. That may be a bit of deception to paper over a middling shooting night, but the good news is that Embiid thinks the equipment he's wearing isn't as much of a hindrance this time around. The goggles he wore after the 2018 surgery, Embiid said, added a layer of frustration and issues with lights reflecting.

It was tougher sledding scoring the basketball. Even the aesthetics weren't all that great on offense — Embiid had a laugh after the game when asked about how the mask impacted his game, noting that he airballed a wide-open shot at one point during Game 3. There were times when he was clearly fighting it a little bit, and give credit to the Heat as well, because they were able to crowd him and prevent him from punishing switches as they continued to use a lot of the same coverages they used in the first two games.

That necessitated some puzzling out from the team, and the Sixers landed on a pet play in the second half. James Harden jokingly accused me of giving away the gameplan after the game, but I imagine the Heat are already preparing to deal with more of the double-drag screen in Game 4 on Sunday.

"When multiple guys are in different actions, things tend to mess up and you try to create some confusion, some indecision on the defensive end to be able to attack," Harden said. "We found something, and we just continue to try to find ways."

That action did indeed create some confusion on Miami's end, and Embiid throwing his weight around as a screener was part of the difference. On this possession, for example, Embiid's screen of Victor Oladipo allows Harden to turn the corner with a ton of space in front of him, Tyler Herro scrambling back after Thybulle slips the second screen. By the time Harden gets to the elbow, he has multiple options — Georges Niang for an open corner three, or a pass back through the pocket to a popping Embiid.

Miami's wall of defenders is still there, trying to stop Harden as a scorer the same way they did in Game 1 and 2. But they were playing on Philly's terms rather than their own, and that was a big part of the difference late.

Evening up the series in Game 4 is going to be a tougher task than the one they had in front of them on Friday, riding high off of the return of their leader. The Sixers had a hand in steering Miami's shot selection and poor offensive night, just as Miami did when Philly performed poorly on Biscayne Boulevard, but banking on Danny Green to match Miami in total three-pointers made is certainly not a recipe for consistent winning.

Having Embiid in the lineup, though, gives you multiple paths to victory each and every night. He's a rim protector, an attention vacuum, a shotmaker, a walking morale boost, and the best player they have.

"I was so happy to see 21 hanging up in the locker room with his mask or whatever," Maxey said Friday.