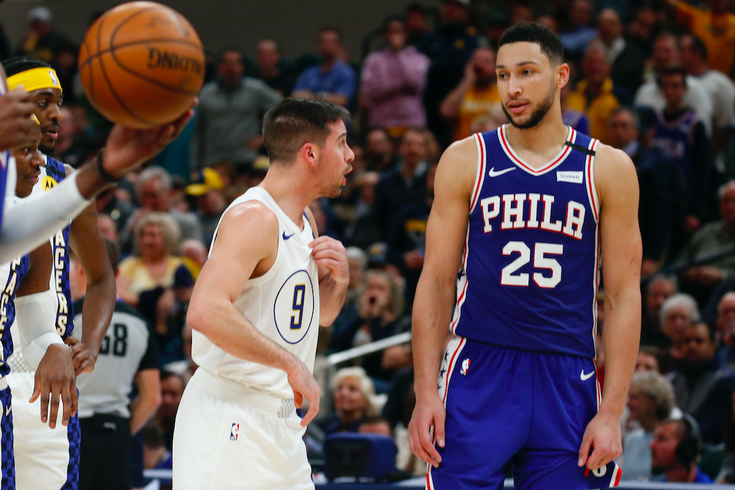 We almost got a Ben Simmons vs. T.J. McConnell matchup in Round 2. Unfortunately, McConnell couldn't hold off Aaron McKie.

The Philadelphia 76ers coughed up a winnable game against the Indiana Pacers on Monday night, further compounding concerns about their ability to withstand the absence of Joel Embiid.

During this anxious time in the season, the last thing anyone on the Sixers needed was T.J. McConnell yapping on the court during the limited, customarily high-energy minutes he plays.

MORE: Eytan Shander: It's time for the Sixers to send a message — by firing Brett Brown | Grades for the Sixers at the halfway point of the 2019-20 season

McConnell, who left Philly for Indiana in free agency, was mic'd up on Monday night and made sure to let his teammates have it. He was legitimately funny, so it's hard to hate this.

Mic'd up with T.J. McConnell was a success, here's a few of the highlights:

"You ain't about this, go back down there."

"His shoes are terrible... Wh-why? Those green shoes."

"Did you lose a bet wearing those?"

The best part of this is Ben Simmons trying to ignore McConnell rooting against LSU — where Simmons played a season — in the College Football Playoff National Championship. The Tigers smoked Clemson 42-25, so at least there's that. You can sense Simmons wanting to flick T.J. in the forehead.

A lot of Sixers fans were sad to see McConnell leave Philly, more because of his contribution to the culture of the locker room than his diminishing role on the court. Last night was all in good fun, but the Sixers badly need someone to give them the kind of spark McConnell used to provide when you least expected it.