Instant observations: Sixers wilt in second half vs. Pacers for yet another road loss 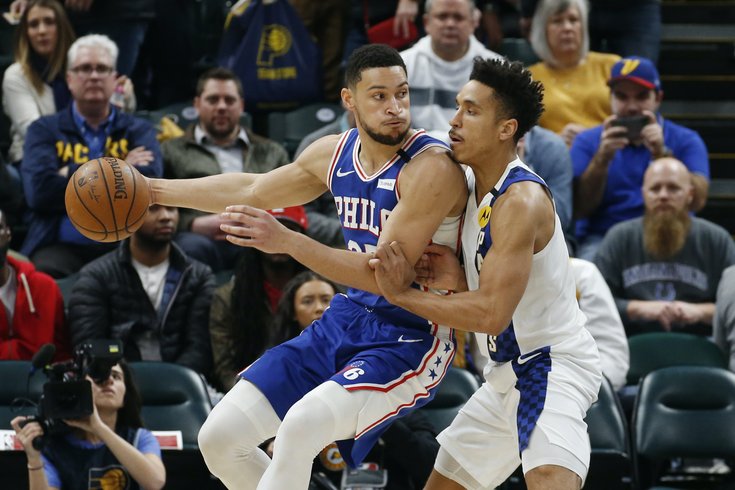 The Sixers jumped out to a lead in the first half behind a big effort from Ben Simmons, and yet no one will be surprised that Simmons and the team shrunk in the second half, eventually losing 101-95.

Here's what I saw on Monday night.

• When Josh Richardson is bad, he is really bad. The Sixers have been running a lot of their offense through him lately, and the results were good enough last week for the NBA to name him Eastern Conference Player of the Week. He looked like a mess for three quarters, and there were plays on defense where he looked like he had brain cramps mid-possession, allowing uncontested drives to the basket that Al Horford couldn't make up for on the back end.

But when it came time to take over the game in the fourth quarter, it was Richardson who took the reins of the offense and took over. Richardson basically carried a bad unit to open the quarter, and as the fourth period wound on, his confidence continued to grow, hitting shots at all three levels and probing the defense to find the slightest crack. Some of the possessions were just good displays of shotmaking rather than great possessions of offense, but this team has to take whatever it can get there.

He's not going to win many fans in the analytics community by racking up makes on long, contested twos. But if it adds up to a win, it doesn't especially matter where the points came from.

• Considering the opponent, Ben Simmons may very well have played his best half of the season on Monday night. It was one of the rare stretches of play where Simmons just put his head down and bullied his way to the rim over and over again, and wouldn't you know it, it led to an uptick in scoring and a nice lead at halftime for Philadelphia. 20 points at the half is nothing to sneeze at.

Style of play matters so much for Simmons, and you can often feel when he's going to have a big night. When he is committed to getting up the floor in transition, that is obviously a good thing on its own, but it's also connected to increased aggressiveness in the halfcourt. It's like he flips a switch and turns into a completely different guy — and if it were that simple, the Sixers would do well to just make sure it's on at all times.

The problem for Simmons in the past has been sustaining that type of half for a full 48 minutes, as we saw in Saturday's ugly loss to the Dallas Mavericks. True to form, Simmons' success attacking dropped off of a cliff in the second half. It's not hard to figure out why — he insisted on posting up more often instead of trying to get downhill. Despite the fact that he looks like he should be a huge matchup advantage on the low block, that's rarely how it works for Philadelphia. Too often, he's simply playing to pass, and when he does try to attack down there, he can't find the line between good physicality and offensive fouls.

I thought Simmons was excellent on the defensive end as he has been most of this season, helping to slow down T.J. Warren, who has absolutely cooked the Sixers this season. There are few guys in the league putting together end-to-end possessions like Simmons this year, which is why his struggles in the halfcourt are so infuriating.

With the way he started, we should have been talking about a potential 35-40 point night from Simmons, and the only thing really holding him back was Simmons himself. They can't put the ball in his hands in the halfcourt when it matters, something that has been true for three years now.

• It would have been hard for Al Horford to play worse than he did the last time these teams met in Indiana, but his defense was significantly improved compared to the New Year's Eve affair. As was the case against Boston last week, some of the improvement was scheme-based, with Horford playing up on the screener more and using his physicality to mess with the Pacers on defense. Those sort of adjustments help minimize Horford's weaknesses (e.g. trying to prevent lob attempts) and allow him to showcase his strengths.

Does that make his inability to make wide-open threes sting any less? Answers will vary, but it's a no from me. The Sixers don't need Horford to be a sharpshooter, but teams are flat-out abandoning him in coverage at times, and the Sixers already have one starter too many who you could say that about. Horford can't make a big structural problem worse. What's worse is that he just sort of meandered through the game in the fourth quarter, not helping the Sixers collect rebounds against a talented front line and not helping them create or make shots on the other end.

• The ugly truth about this Sixers team is they simply cannot score at a level befitting of an NBA Finals team. We can talk about their lapses in concentration on defense, which are certainly annoying, but we at least see they are capable of dialing it up and leaning into teams when they are motivated. You can't make the same case on offense, where the issues with personnel show up again and again and again.

There is a difference between elite, "you have to guard me at all times" type shooters, and the sort of shooters the Sixers have. The Sixers have a collection of guys you'd say are "nice" on offense, but outside of Joel Embiid, nobody actually strikes any fear into opponents. And with Embiid eating up space in the paint that most of their best offensive players want to use, it's not as though his return will be a cure-all for what ails them. Nobody on this team has gravity, which means they have to fight hard for almost every attempt at the rim.

It doesn't strike me as an easy problem to fix. Do you swing another major trade and uproot this group once again for a better-fitting core? They probably won't really consider it this soon, but they have three or four players on the floor at a time who want to operate from the block. It often ends with players running into one another during basic actions, cutting off space that should work to their advantage.

The swings back and forth across the spectrum are tough to watch, and I get paid to do so, so I sympathize with anyone who follows this team for the sake of their own personal enjoyment. I guess it's just hard for me to get worked up about these issues on a consistent basis because they could have been predicted the moment this team was put together in the summer.

• Put it this way — the Sixers are not going to win or lose a title because of James Ennis. He was a good rotation player during last year's run, but he's a standstill shooter and an up-and-down defender, one capable of playing some shoddy minutes against the wrong matchup.

Ennis' absence is especially strange when you consider how much rope Brett Brown has given Mike Scott, who continues to stink up the joint. It's not like anything Scott does between now and the trade deadline is going to have any impact on his value, as his inclusion in potential trades is more about the contract number than his on-court production.

I'm not usually a "Brett Brown's rotations!!!!" guy, but can't figure this one out unless Ennis has an illness/injury we have not been made aware of.

• The Sixers' awful three-point shooting is the source of a lot of frustration for people watching the team, and rightfully so, but I will stand by the claim that the looks they're getting there are good. If the guys they expect to make shots would actually do so, they would be fine.

It's free-throw shooting that I would look at as a potential fatal concern, because if Joel Embiid isn't in the game and willing himself to the line, the Sixers don't have anybody who consistently seeks out contact and manufactures points at the line. They are rarely able to sustain themselves during shooting slumps as a result, so it's unsurprising that they end up squandering big leads if the team goes cold.

There are several reasons this is the case. A lot of their players simply don't have the craft to get to the line. Simmons shies away from contact instead of using his physique to his advantage in the paint. And frankly, a lot of their guys are trying to draw help and pass out from the post, which leads to open threes but is not necessarily helping with the free-throw problem.

What's the sense of building a big team to play "bully ball" if that construction doesn't allow you to play that style? Philly would end up flexing their muscles here in the fourth

• Been tough sledding for Matisse Thybulle since returning. His grace period post-injury is coming to a close. You can commit a couple of dumb fouls and miss shots, but you can't do both. Time to sharpen up, rook.

• The Sixers are now down 2-1 in the season series to Indiana, which is not a good position to be in halfway through the season. Indiana will get Victor Oladpio back shortly, and have overachieved without him. Nothing about this Sixers season could be counted as "overachieving."

• Norvel Pelle tries hard, but this is an awful matchup for him. Damonatas Sabonis and Myles Turner are both at a major strength and smarts advantage against Pelle, which they used to bait him into fouls or misguided block attempts, both of which ended poorly for Philadelphia.

I would tell you that it was a night where maybe they should have used Kyle O'Quinn more, but he didn't exactly drape himself in glory in the last meeting between these two teams, and they're trying to figure out what they have in Pelle, so I get it.

• Most of that game on offense was ugly, truthfully.