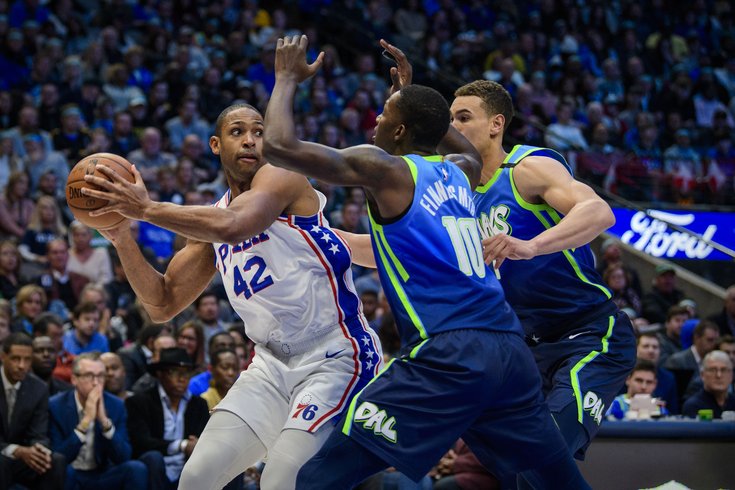 The Sixers started off well in Dallas on Saturday night, but a horrific night shooting the basketball eventually caught up to them, with the Mavericks ultimately flying past Philly for a 109-91 win.

• Given a chance to go toe-to-toe with Luka Doncic, the MVP candidate who missed the first meeting between these two teams, Ben Simmons made it his personal mission to torture Doncic defensively.

With the rest of his teammates in a horrific funk shooting the basketball, the Sixers needed Simmons to basically shut down Doncic in the opening quarter. Mission accomplished — the Mavs had eight turnovers in the first quarter, and even when it wasn't Doncic personally turning it over, on most occasions it was because Simmons pressured him into giving the ball to teammates who were already in tough spots.

(Worth noting here: I thought the Sixers did some nice things schematically to give Simmons the best chance to impose his will on defense early, after Al Horford had a standout defensive game against Boston for some of the same reasons. The Sixers threw some hedges at him, denied him the ball with full-court pressure, and sent waves of good defenders at Doncic to make sure he was never given an easy possession.)

The problem here is that once Simmons got into foul trouble, the Sixers shied away from using him on every possession against Doncic, and that had a multi-pronged effect. The other options were inferior defending Doncic, and some of Simmons' bad habits as an off-ball defender reappeared on Saturday night, with Simmons falling asleep on shooters in the corners who Doncic would ultimately find for makes.

The Sixers did not necessarily lose this game because of defense, but they got worse over the course of the game on that end, and it tracked with Simmons' personal performance in the game.

• The true diehards among you will remember that Furkan Korkmaz once competed in a European dunk contest in a cape and a Darth Vader mask. Even if you don't believe that is a thing that happened in real life, Korkmaz gave everyone a little Saturday night spice with a reverse throwdown in transition midway through the second quarter.

My only rule with in-game dunks is that if you're going to try to flush it with style, you better make it, so two thumbs up for Korkmaz here.

• This section has felt like a personal Mike Scott ranting space as of late, and I'm still not sure I have stressed enough how bad he has been. The Sixers are creating looks where there's nobody within 10 feet of Scott as he prepares to shoot, and he still somehow manages to launch a shot that barely hits the side of the rim. He is being asked to do one very simple job, and he is not just failing at it, he is going down in flames, compounding that issue by not even trying to box guys out and making mind-numbing defensive reads.

I also don't really understand why you'd leave him out there in this state, given that his answer to sucking as a shooter is to go down on the low block and try to post people up, which he's not particularly good at and takes up space better players (and better post players!) could be occupying.

I understood giving him a start the other night as a placeholder option in Matisse Thybulle's first game back from injury, and with the Sixers wanting to have a good defender on Luka Doncic for 48 minutes, I even understood keeping this lineup for Saturday night's game.

• Speaking of Thybulle and defense, he got baited into a couple of cheap, stupid fouls by Doncic on Saturday night, and it was a reminder of how much he still has to learn at this stage of his NBA career. Doncic lives to bait defenders into reaches and desperate block attempts, and Thybulle gifted him trips to the line at the end of the first quarter, apparently not hip to his game.

As I said after the Boston game, he gets some time to get his legs under him post-injury in my mind, so no need to harp on his play too much.

• There are some people who will watch this game and yell about the Sixers continuing to attempt threes in spite of their brutal night shooting the basketball. We are not going to view basketball the same way — though as with the run game in football, I am always in favor of a balanced attack.

The problem, as far as I see it, is that the Sixers could not make wide-open shots. It does not make for spectacular analysis to point out that this was their biggest offensive problem, but that doesn't make it any less true. Whether it was Scott, Tobias Harris, Al Horford, or Josh Richardson, Philadelphia's starters looked like they had never tried to shoot threes prior to Saturday night.

When the Sixers don't make threes, I think they too often compound that problem by settling for bad shots elsewhere. Taking midrange shots when they present themselves is a good way to find your rhythm from time to time, but that's if they're open, and the Sixers forced bad mid-range looks throughout the second half, which didn't put points on the board and didn't do anything to help get guys going.

What's more, the offensive struggles eventually carried over to the defensive end, where they were spectacular in the first half and putrid in the second half. The Mavericks beat them down the floor in transition, hit them hard on the offensive glass, and exploited all their worst tendencies as a defensive unit in the second half, with the end result being another sizable loss for Philly on the road.

Creating open threes and layups is basically the holy grail of modern basketball, so I'm not going to sit here and tell you they should have tried to pound Dallas into dust on the low block. Shot selection from three was mostly fine. But it is definitely an issue that their shooters are as untrustworthy as they are, and it doesn't bode well for when they play better defenses in the playoffs.

Philly tried to ugly their way to a win, but it is hard to hold up for 48 minutes when you can't score at all. Once Dallas cleaned up their turnover problem, this one was over.

• An offensive thing that is within their control is running actions that actually make sense before they start. I understand that Norvel Pelle being guarded by a smaller player looks tantalizing based on basic basketball instincts, but there is no world where Trey Burke should be waving people away so Pelle can try to go to work on the low block. Run a pick-and-roll with the guy or swing the ball, please do not waste anyone's time with that nonsense. K.Y.P., as they say, and that applies to the players on the floor and the coaching staff.

Pelle, by the way, was horrific after a good showing against Boston on Thursday. He was a step slow on his reads, looked out of sorts on offense, and mostly got punked by Boban Marjanovic. Joel Embiid he is not.

• This loss is not on Josh Richardson, who was mostly fine individually, but you are sort of seeing the problem with him being close to a primary perimeter initiator on offense. For every nice lob pass or pull-up jumper, there's a pass that never has a chance to reach its target and a stalled-out possession. The Sixers knew this (or at least should have) when they acquired him in the Jimmy Butler sign-and-trade, but because Simmons hasn't taken the next offensive step, and because Harris has to spend long chunks of games spacing the floor, it's up to Richardson to do more heavy lifting than he's capable of.

Finding a guy who can be a legit primary creator would be tough without a major move. They certainly need a good secondary guy to take the pressure off of Richardson.

• It was easy to dismiss road woes as a function of a tough early schedule, but the inability to win on the road is officially a serious problem for this group. Outside of a couple of notable exceptions, the Celtics win in particular, this team has just not been good at all when they leave the friendly confines of South Philadelphia.

Fortunately for them, the Sixers are currently in a position to not have homecourt advantage in any round of the playoffs, so thankfully that's not something that will matter in the postseason.

• I am not blind to the improvements Tobias Harris has made this season, predominantly on the defensive end, but the Sixers need him to be a much better shooter than he has been this season if they are going to get where they want to go. The same is true to a lesser extent of Al Horford, who came on down the stretch but ultimately left far too many looks on the table.

These guys did not collect hundreds of millions of dollars from the Sixers this summer to be "just okay" as shooters or offensive players. This is the time where they're supposed to step up and help the team in a time of need, and while Horford did that in a big way against Boston, they were both putrid on offense Saturday night, outside of some short bursts. They have all the space and rope with which to work now that Embiid is on the sideline, and they still stunk out loud.

They rest at the bottom of this section, but their struggles are a lot more consequential than Mike Scott being a worse version of the same guy he has been his whole career.

• The entire second half? Their shooting performance for the whole game? Both fit here. Joel Embiid post-ups may end in turnovers too often and may be a style of basketball that doesn't work as well as you'd hope in 2020, but they are a reliable source of offense for Philly, and they are a way for the Sixers to slow the game down and find their footing when shots aren't falling. Not having their safety valve felt like it really hurt them on Saturday.

• Getting fried by Boban has to sting for these guys. The whole crowd rising to celebrate his made three in the final minute was one extra punch to the gut.