...but they didn't make it easy on themselves. 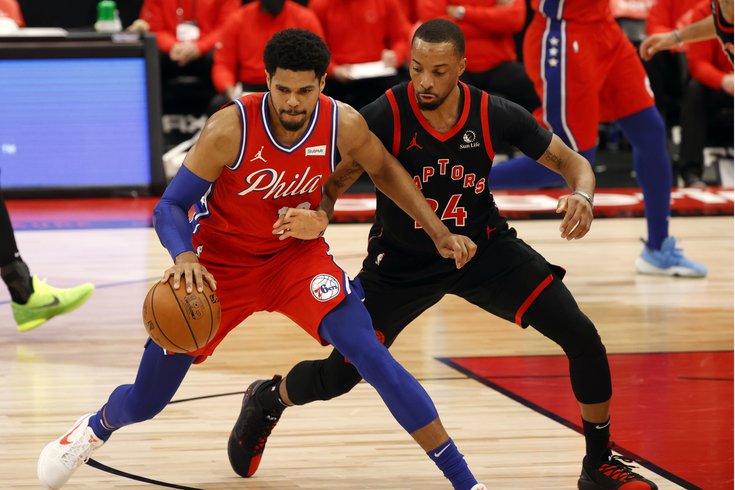 The Sixers picked up their first regular-season road win against the Raptors since the final year of the Doug Collins era, winning 109-102 in Tampa Bay behind a balanced scoring effort.

• There was a lot of anger on social media about Rivers' decision to start Furkan Korkmaz on Tuesday night, and I can't say I blame anyone for the skepticism. I spent most of Sunday's recap (and parts of other recent recaps) explaining why I thought he should be completely out of the rotation.

Korkmaz promptly scored 16 points in the first quarter and made everyone who yelled about it look very dumb. Sports!

On a serious note, I understood Rivers' decision. Bumping up Korkmaz made sense on several levels:

Toronto's defensive gameplan remained the same as it was on Sunday, with hard doubles sent at Embiid almost every time he touched the ball. They needed people who could knock down shots, and Korkmaz was the first man up on Tuesday.

One point in Korkmaz's favor when projecting the rotation out the rest of the year — he probably has the quickest release on the team and might have less trepidation than anyone else when the ball swings his way, with Danny Green his only real competition. Taking shots is half of the battle.

With this group, it feels like hot shooting has been contagious. After Korkmaz got off to his terrific start, the rest of the supporting cast followed. Tobias Harris, Mike Scott, and Shake Milton all had effective nights from deep (admittedly on low volume), and that creates an important feedback loop for the guy who is creating the open shots with his presence.

• Shotmaking was what got the Sixers out to a big lead in the early going, but it was their defensive effort that kept them out in front the rest of the way. Philadelphia's commitment and cohesion was far superior in the second half of the two-game set, with each guy in the rotation offering something a bit different.

Ben Simmons was one of the leaders of that group as he has been all season, shifting in and out of roles and executing switches brilliantly throughout the game. Though it's not something Joel Embiid has done on high volume throughout his career, the big guy also played a big part in that success, picking up Fred Van Vleet on a handful of switches and using his size to keep him from building any downhill momentum.

This was also one of the first games all year where Danny Green finally lived up to his reputation as an off-ball defensive wizard. Green put out a lot of fires for the Sixers with well-timed rotations and closeouts that other guys were either unable or unwilling to make, and he put just enough pressure on Raptors shooters to coax them into a few misses.

When you have guys like Mike Scott playing good defense on a given night, you know the team had a nice night at the office. It was an equally impressive performance from the Raptors for long stretches of the game — their rotations are absurdly sharp when they're locked in — and the Sixers can take some measure of pride for emerging with a win on the strength of the D.

• Tobias Harris didn't quite put up "Pissed off about the All-Star game" numbers but he was about as close as you can get without having a monster scoring night. He was ultra-efficient, didn't need many touches or time with the ball, and he continued a solid season on defense with good help all night.

One development to watch closely — to my eye, the Harris-Embiid pick-and-roll has increased in effectiveness over the last month or so, and not just for Philadelphia's two biggest scoring threats. With a spread floor around them, Harris has been an effective, if sometimes overzealous playmaker, giving the Sixers a bit of secondary creation they probably didn't know they had.

Even if the playmaking is basically zero out of that look, Harris and Embiid are getting quality looks running sets together, and there should be a steady diet of those plays the rest of the year.

• This wasn't one of Ben Simmons' loudest games of the season, but there were a lot of plays made around the margins that added up to winning basketball. He kept a couple of possessions alive with tips in traffic on the offensive glass, made some terrific interior passes that turned into buckets, and the aforementioned defensive contributions that we basically think are a given at this point.

Every time it felt like they needed somebody to give them a burst of energy to stave off a Toronto run, Simmons provided it. Some nights, his box score overstates the impact. Tuesday night, I thought the line sold him short.

• Joel Embiid had a disaster night from the field against the Raptors for the second game in a row, a subject that might warrant more investigation later. But it must be said again as it was Sunday — I like a lot of what I'm seeing from him when the double comes, and many of Philadelphia's made threes started with the big guy in the post.

Embiid's passing variety has changed significantly this year. There are more cross-court passes, more touch passes as soon as the ball hits his hands, even bounce passes to cutters (though I'd advise against too many of those, given his success rate). It makes him less predictable when the pressure comes, and in this two-game set against the Raptors, it led to an unholy amount of threes for his teammates, which is the goal for any modern NBA offense.

• This might sound funny when describing a two-game set where they went 1-1 against a team missing their best player, but I honestly feel a little more confident in this team as a contender after this pair of games. They saw Embiid play probably his worst two games of the year, they didn't get a dominant effort from Simmons in the second game, and they still had chances to win both on the road with better shotmaking.

They had to play a very different brand of basketball with the Raptors hard doubling (and often triple-teaming) Embiid in the post, and though it led to some clunky possessions and forced shots, they created good offense the majority of the time.

• The story for Joel Embiid was largely the same on Tuesday as it was on Sunday. When he got rid of the ball quickly and instinctively against double teams, the Sixers generated open three after open three. Thankfully for Embiid, his teammates actually cashed on the opportunities this time around, allowing the Sixers to coast on a big lead for most of the first half.

For whatever reason, there was a moment in the second quarter where his individual struggles seemed to get to him, forcing him to make uncharacteristic mistakes that helped Toronto chip away at the league. There were forced shots against the pressure, bad reads on defense, lazy efforts on rebounds, even a play where his effort was misguided — Aron Baynes air-balled a shot that landed basically on top of himself, and with Baynes unable to grab the ball, Embiid nonetheless dove at it like he was trying to fall on a grenade, and then threw away the ensuing pass when he came up with it.

No one needs to lose their heads over missed shots, but the coaching staff would do well to go through the tape on a game like this and emphasize how much better off he and the offense are when he looks at a double and immediately fires a pass to an open teammate. Turnovers were a big problem for Embiid on Tuesday, a direct product of the relentless pressure they sent his way.

That's why I think this two-game swoon for Embiid may ultimately end up being a good thing for him in the long run. It has been easy for him to be locked in and on point all year because his shots have been falling and the offense has run through him at nearly all times. Good teams are going to do whatever they can to rattle him and get the ball out of his hands, and he has to fully embrace when teams throw this much pressure at him.

Still, Marc Gasol is gone, and the Raptors are still bothering him. Other teams will take notice.

• Danny Green nearly undid all of the good things he did on defense with some absolutely mindboggling decisions against the Toronto press in the final few minutes. The crosscourt pass that was picked off with around 20 seconds to go is up there with his worst turnovers of the year, and that's saying something.

• Was the officiating better or worse on Sunday than it was for this game? There were some absolutely ridiculous no-calls on Tuesday, including when Ben Simmons hammered Norman Powell on a transition "block" early in the second half, leading to Powell picking up a tech for (correctly) arguing they made a mistake.

On the other side of the coin, Aron Baynes basically acted like an offensive lineman on a transition possession in the third quarter, preventing Embiid from getting into a position to contest (and eventually forcing him to take a foul).

I guess the one point in favor of Tuesday's crew is that they at least were relatively consistent. The Sixers and Raptors were allowed to play physical basketball throughout the night, I just wasn't aware that we were bringing back the style of play that was left behind in the mid-90s.

• Every Sixers-Raptors game feels like it takes four hours to complete.