The Philadelphia 76ers officially announced their 2017-18 schedule on Monday, and it includes 14 nationally televised games, starting with their season opener at the Washington Wizards on Wednesday, Oct. 18  (ESPN). Two days later, they'll play their home opener against the Celtics on Oct. 20 at the Wells Fargo Center.

In addition to the already announced Christmas Day game against the Knicks and the trip to London to face the Celtics in January, here are some other highlights from Sixers schedule:

•  The Golden State Warriors visit Philly on Saturday, Nov. 18. It will be the teams' second matchup of the season – a week earlier, the Sixers will face the Warriors in Oakland.

•  The Los Angeles Lakers Big Ballers are coming to town in December for a matchup between No. 1 overall pick Markelle Fultz and No. 2 overall pick Lonzo Ball (Dec. 7). That game will be featured on national TV as well (TNT).

•  Finally, the Sixers will host LeBron James and the Cleveland Cavaliers twice this season. The first comes on Nov. 27, and the second takes place toward the end of the schedule, on April 6.

Here's a look at how the Sixers' home and away schedule breaks down by month:

The Sixers wrap up their season on April 11 with a home game against the Milwaukee Bucks. 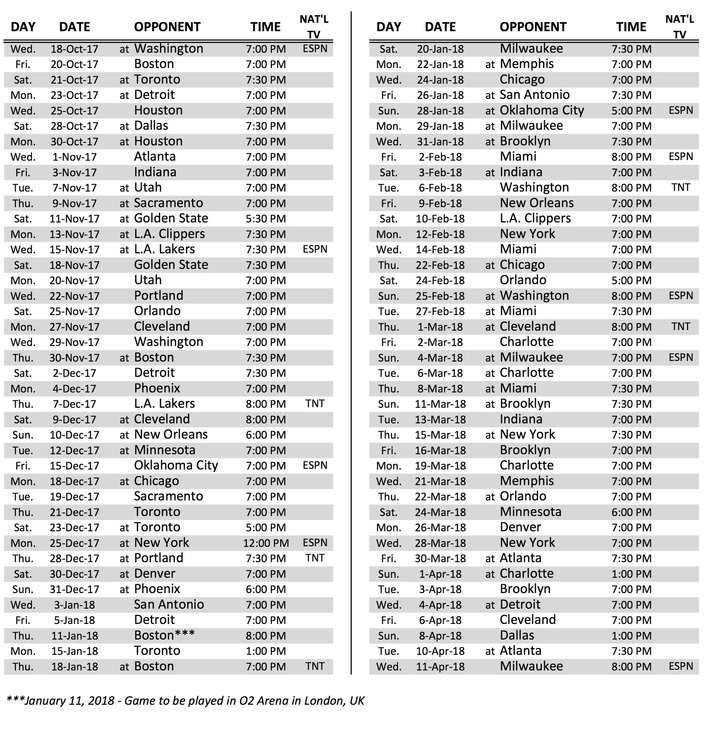