5 likes and dislikes from Sixers' Game 1 loss to Heat 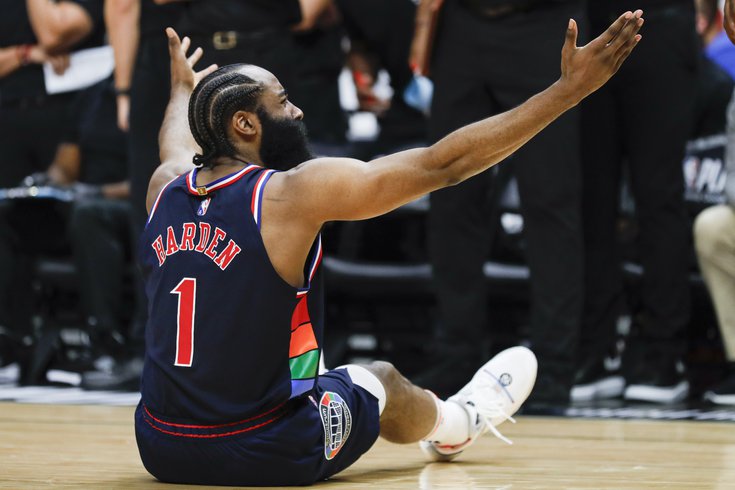 MIAMI — The Sixers did not capitalize on a chance to steal Game 1 in Miami, but that doesn't mean their opening game of the second round was all bad. Tobias Harris continues to shine, they showed toughness to battle back for a halftime lead, and, well, I suppose things took a turn after that.

Let's take a look at some of the subplots.

Dislike: James Harden being a "he created open threes" guy

I was probably as loud as anyone coming into this series about the idea of "vintage Harden" being unfair to expect in this spot. When a guy shows you what he is capable of over a full season in his mid-30s, that's probably more relevant to what he can do because you want to believe his prime production is just buried underneath the surface, hopeful he can summon it.

Still, we got to see our first game of Harden running the show with no Embiid to run with him in these playoffs. And against a Miami team that can throw some troubling matchups at him, Harden had a line not dissimilar to a Ben Simmons game — 16 points, nine rebounds, and five assists across 34 minutes. Afterward, Harden hit on a theme that has popped up quite frequently in postgame discussions.

"I think I can be a little bit more aggressive," Harden said. "They did a really good job of just boxes and elbows, showing their bodies and crowding the ball when ball screens came. We'll watch film and find ways to get better, but I think the shotmaking is what opens up the floor for our entire team. Make a couple shots, and that floor opens up a little bit more."

At halftime, Harden appeared to be on the pathway to a stellar, if not spectacular Game 1 performance. Hunting Tyler Herro is not the name of a Paramount+ series, but a viable offensive strategy for the Sixers in this matchup. By the time the final buzzer sounded, Harden had not done much to add to their final total, making just one of four shot attempts with a pair of assists and two turnovers after halftime.

If you run the tape back, you can certainly conclude that Harden would have had a bigger impact on the game if his teammates had a relatively normal outing from deep. Danny Green and Georges Niang shot a combined 1/12 from deep and 0/6 in the second half of Game 1, building a house of bricks as impressive as any structure I've seen in the greater Miami area.

These are good reads and good passes from Harden, who is responding to Miami cheating toward him with an extra defender. It is not his fault that Niang was terrible.

"It's not about James, it's about all of them," Rivers said postgame. "We're a team, and we just have to play as a team."

Harden being 1/5 from the field while guarded by Max Strus? That's a different story. Harden ending the game with 13 shot attempts on a night where they didn't have Embiid? Don't like that either. The Sixers didn't trade for Harden for him to be Ben Simmons with the willingness to shoot threes. This is supposed to be the capable co-star and the guy who can carry you when Embiid hits the bench. That version of him, save for an outlier performance or two, has been nonexistent.

Unlike with Simmons, I do think Harden is coming from the right place in his decision-making. He's responding to how the defense is playing rather than shirking responsibility and asking everyone else to figure it out. But Harden has been through enough playoff wars to know that sometimes a star is going to have to just plow through doubles and try to carry a supporting cast that doesn't have enough to offer.

A 1:1 assist-to-turnover ratio and that line is simply not enough without Embiid. There has to be more in Game 2.

It's not enough to say that Tobias Harris is in a good run of form right now. We have seen him have stretches, even long stretches, where he has played highly productive minutes and contributed to winning. What's different this time is that he is different. This isn't the same Harris he has been even on his good days.

Play-to-play, his defensive effort and reads are better than they have ever been. In zone and in man-to-man, Harris closed ground decisively and used his size effectively, using tools that have always served him well on offense to help them on the other end.

The only real concern related to Harris on Monday is that he was being asked to do too much. Rivers called a timeout in the third quarter that he explained after the game was almost exclusively about Harris' fatigue.

"He was great, thought he was exhausted. I was worried about him, it's why I called the one timeout to ask him, I thought I saw something that hopefully I didn't see," Rivers said. "I was concerned. I called a timeout in the third quarter just to ask how he was doing. I thought he was spent."

And that dovetails with our first bullet point. If Harris is going to dig in and play a huge role on defense, asking him to be the guy leading the way on offense is a bit too much. Harden has to come through for him, if nobody else.

Good god almighty, what the hell is this?

PJ Tucker is a tough SOB, but this is just embarrassing, and it's a play from a guy who spent part of Sunday's availability talking about being prepared for a fight in this series. This is a fight in the style of the scene from "The Simpsons" where the children stand around in horror as Homer beats up a costumed hamburger mascot.

Pile this on top of an 0/7 night from three, and you have yourself quite a stinkbomb. Niang just spent most of their first-round series getting run past and run through by the Toronto Raptors, and he's off to a flying start against Miami in that regard.

If it makes him feel any better, Matisse Thybulle managed to let Tyler Herro collect his own miss after he stumbled out of bounds on the initial attempt. Seriously, I'm not making this up, look at this monstrosity:

That is absolutely pathetic. Thybulle played under 10 minutes of action himself on Monday, a reflection of how far out of favor he has fallen. It's not just shot-taking (of all kinds) that's a problem at this point.

Dislike: How much time is being spent discussing center

I should be clear, even after writing a news story on DeAndre Jordan starting in Game 1, that we probably should spend less collective time frowning and yelling about who is playing without Embiid available. Here's a simple truth — you can't make up for your best player being missing with a bunch of minimum-salary guys who you're simply hoping won't screw up most of the time. That's not a route to success in the playoffs, and the burden of performance falls on the team's leaders, not Jordan or Paul Reed or Paul Millsap.

They're going to have issues no matter who they play, which includes if they play Charles Bassey, who would be getting thrown into the fire after not playing meaningful NBA minutes for most of the season. Remember, while Andre Drummond did some excellent work backing up Embiid and even in some spot starting situations, he was pretty bad when he had to be the guy holding down a huge role with Embiid out due to COVID in the fall. Backups are backups for a reason. It's the nailed-on starters who matter most.

Like: The defense was, for the most part, pretty good

The Heat shot 43.5 percent from the field, 25 percent from three, and the Sixers were very much in this game despite their shooting accuracy lagging far behind their shot profile. If you're going to be heartened by anything from this performance, it should be that they were able to play passable, at times even very good defense without Embiid available to anchor on the back end.

The Sixers undid some of that work by allowing Miami to kill them on the glass — the Heat rebounded 38.5 percent of their misses in outside of garbage time on Monday, creating a shot-volume discrepancy that ultimately undid them. Rivers, though, thinks they should be able to sit in the zone look they used most of the night without getting pummeled on the glass.

"They keep their five in on the zone, and that's why we think we can rebound out of it," Rivers said. "It's not a zone offense where they're moving the five around and he's diving in, our five is pretty much matched up to their five. But it's the other guys, and you're right, they're diving in and we got to hit bodies... there are a lot of bright sides, they shot 43 percent."

More defense like that, and they'll give themselves a chance.