A sneak preview of the 2017 RB draft class 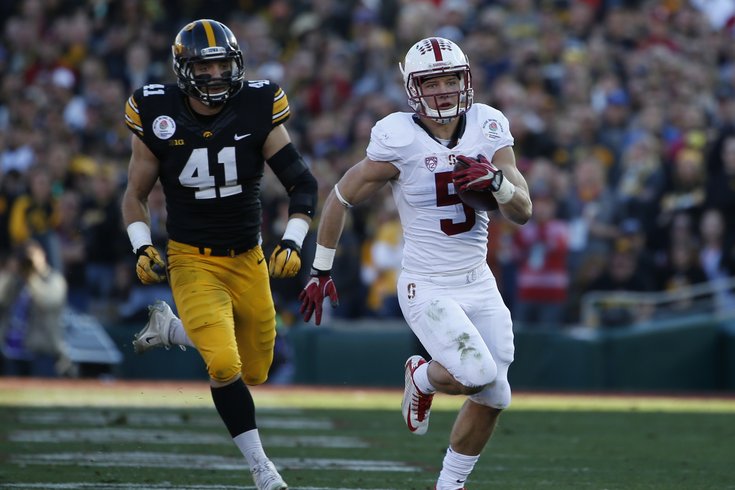 Stanford RB/KR/PR Christian McCaffrey is like a bigger version of Brian Westbrook.

It's perhaps a little early to start looking forward to the 2017 NFL Draft, but because it has been a fairly regular question in our weekly Eagles chats, we'll review the running backs who could be available a year from now.

Back before the Eagles traded up to the No. 2-overall pick in the 2016 NFL Draft, a hotly debated player among the fan base at pick No. 8 was former Ohio State RB Ezekiel Elliott, who was ultimately drafted by the Cowboys with the fourth-overall pick. Many felt that his skills were too good to pass up at pick No. 8, which others did not feel constituted good value because the running back position has become devalued in recent years.

Personally, I was among the latter group, but my primary reasoning was that the 2017 NFL Draft could be absolutely loaded with running back talent. There's a decent chance that teams will have a crack at a back with comparable skills to Elliott in next year's draft at a spot far lower than what it took to land Elliott.

The top four running backs currently on the Eagles' roster are Ryan Mathews, Darren Sproles, Wendell Smallwood, and Kenjon Barner. Of the four, there's a good chance that only Smallwood will be back with the team next year.

This offseason, both Mathews and DeMarco Murray were on the trading block. The Eagles were going to trade one and keep the other. When they traded Murray, Mathews became the lead back, out of necessity. Mathews has only played all 16 games once in his career. When he wasn't missing games, he was often playing with some kind of injury. From 2010-2015, Mathews appeared on the injury report a staggering 53 times. He also doesn't have good hands as Eagles fans witnessed a season ago, so he may not be the fit the Eagles are looking for at running back in Doug Pederson's offense. If the Eagles trade or cut Mathews next offseason, they'll save $4 million.

Meanwhile, Darren Sproles was rumored to have interest around the rest of the league, and he skipped Eagles workouts until this week, when he showed up to the Eagles' facilities for a mandatory minicamp. It feels unlikely that he'll be back in 2017, as he is on the last year of his deal.

Let's take a look at next year's class:

Assuming his college career continues the way it's going (actually let's just pretend that that assumption is made for every player on this list going forward), Fournette is going to be a high draft pick. While he doesn't have elite lateral agility and he only has 26 career receptions, he may have the best size-speed combo since Adrian Peterson. His numbers:

Cook is a complete back, who has power and speed, as well as the ability to make plays in the passing game out of the backfield. Perhaps his best strength is his combination of vision and lateral quickness to find (and hit) open holes, which is on display in the highlight reel below:

McCaffrey garnered 290 first place Heisman votes, finishing second overall to Alabama's Derrick Henry. In 2015, McCaffrey set a new NCAA single-season record of 3,864 all-purpose yards. The accolades on his Stanford bio page are almost comical. He can run, he can catch, and he can return kicks and punts. Essentially, he's like a bigger version Brian Westbrook. Or maybe Ricky Watters without the alligator arms? His numbers:

However, McCaffrey's 2000-yard season isn't even the impressive part. In 2015, McCaffrey had 45 receptions for 645 yards (a ypc average of 14.3), and 5 TDs. He also had two kick/punt returns for touchdowns, and he even threw two TD passes. They may not be a more versatile offensive weapon in college football. A highlight reel:

When Georgia lost Todd Gurley for the season in 2014, Chubb came in and the Bulldogs' run game didn't suffer all that much. Insert Chubb, and everything was fine. In his first five games in 2014, playing second fiddle to Gurley, Chubb only had 31 carries for 224 yards and 2 TDs. As the starter, Chubb lit it up in the final eight games, carrying the ball 188 times for 1323 yards and 12 TDs.

In 2015, he picked up where he left off the previous season, rushing 91 times for 745 yards (for a ridiculous 8.2 ypc) and 7 TDs in his first five games. And then he suffered a grotesque injury in his sixth game against Tennessee.

His numbers over two incomplete seasons:

Chubb has a low center of gravity and runs with power, but as you can see in the video below, he also runs with good vision, he makes effective cuts in traffic, and has good enough speed to rattle off long runs. Warning: Skip to around the :25 mark if you don't want to see his gruesome injury:

Chubb may or may not be ready to play in Georgia's season opener.

Perine is probably most known for owning the FBS single-game rushing record, when he had 427 rushing yards in a 2014 game as a freshman against Kansas. He is also known for his incredible strength. Go read what Perine's teammates say about him in the weight room. Here are his numbers.

At 5'10, 230, and with his strength noted above, tackling Perine is like tackling a runaway bowling ball. Note the way defenders bounce off of him on initial contact. He reminds me a little of a more jacked up and faster Duce Staley.

Like a lot of other guys already noted above, Freeman is a big back at 230 pounds who moves faster than you would expect.

After a 2014 season in which he rushed for 1765 yards, in Pitt's first game in 2015 Conner tore his MCL and was lost for the season. In December he was diagnosed with Hodgkin lymphoma. In May of 2016, Conner announced that he beat cancer.

God is AMAZING. Just got the call that my body is clean of cancer!!! Been a long road but God had my back. Thanks everyone who said prayers!

In a class full of bigger backs, Conner is the biggest at 6'2, 240. And again, not to sound like a broken record, but he moves a lot faster than you would expect at his size. The downside with Conner is that he has just nine career receptions, perhaps making him not the best fit for the Eagles in Doug Pederson's offense. Conner's highlight reel:

Gallman was the running complement to Deshaun Watson and Clemson's passing attack in 2015. He's a little leaner than most of the other backs on this list, but is a physical runner. His numbers:

With 45 career receptions, he also has some receiving ability, at least compared to the other runners in this class. Watch his impressive cutting ability in the hole. This is going back a ways, but he reminds me a little of former Bengals and Pats RB Corey Dillon.

Hood is yet another bigger back who had great numbers in 2015.

Unlike some of the other big backs noted above, however, he does not have breakaway speed, and he is not much of a threat out of the backfield as a receiver.

In the 2016 NFL Draft, two Alabama running backs -- Derrick Henry and Kenyon Drake -- were both taken in the first three rounds. Georgia could also have two backs taken in the 2017 NFL Draft in Chubb and Michel. Depending on Chubb's availability to start the season, Michel could get a lot of work early. If Chubb is ready to go when the season begins, Michel could just opt to stay in school for his senior season, when he can be "the guy." His numbers:

The potential 2017 running back class isn't just loaded with elite talent. It also has a lot of depth. There are plenty of other intriguing backs who could come out in the 2017 NFL Draft. Some others:

• Jalen Hurd, Junior, Tennessee (6'2, 230): Throw another big back on the pile. On the downside, Hurd has averaged just 4.7 yards per carry over his college career. On the plus side, he has 57 receptions over the last two seasons.

• Bo Scarborough, Sophomore (redshirt) Alabama (6'2, 240): Scarbrough enters the 2016 season as just a sophomore, but because he redshirted, he would be eligible for the 2017 NFL Draft. Alabama is a professional running back factory, which makes Scarbrough a player to keep eye on, at a minimum.