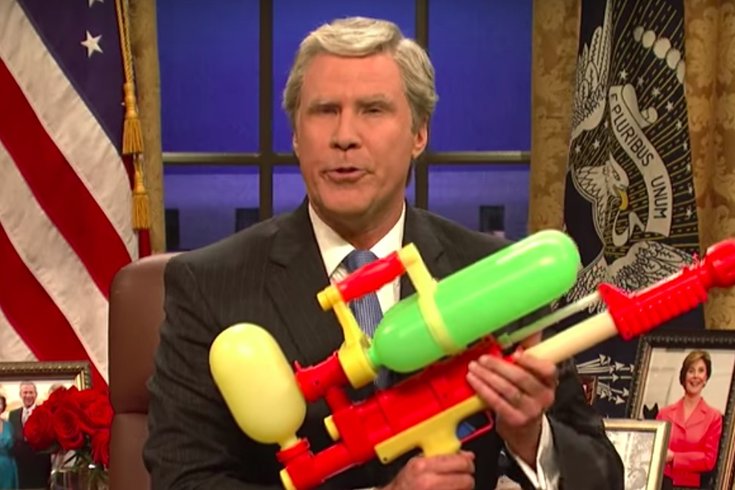 In the countdown to the Winter Olympics, “Saturday Night Live” is in the midst of a four-week run of new episodes, with Will Ferrell returning to Studio 8H to host the third new episode of 2018.

The return of Ferrell, who served as a cast member on "SNL" for seven years, saw the reprise of his President George W. Bush impersonation. In the cold open, Bush notes that, despite his skyrocketing approval rating in the age of Trump, he wants “to remind you guys that I was really bad. Like, historically not good.” He continues: “Who has two thumbs and invented ISIS? This guy!”

In the opening monologue, Ferrell gushes about being on "SNL," saying he was so excited he accidentally concussed himself on the way to the stage. The monologue dissolves into an incoherent rendition of “I Think I’m Gonna Like It Here” before Ferrell is strapped to a gurney.

Several of the night’s more memorable sketches centered on the ongoing sexual assault and harassment allegations in the news, including Ferrell’s portrayal of a fighter pilot who goes by “Clown Penis.”

“I want them to feel the same way you’d feel if a clown showed you his penis,” he tells Honolulu ground control.

Later is a digital short for men’s deodorant "Next," designed to keep men clear of sweat while news of their sexual misconduct begins to circulate. “For men feeling the heat because their #TimesUp,” the tagline goes.

The show perhaps best captures the unease of talking about sexual misconduct in the sketch “Dinner Discussion,” where cheerful banter about dogs goes sour when someone brings up the allegations against Aziz Ansari. Barely anyone at the table can complete a sentence as others interject with “Watch it,” “Careful,” and “Nope.” When someone actually does complete a sentence, all hell breaks loose.

During Weekend Update, co-hosts Colin Jost and Michael Che discussed the government shutdown and immigration before Ferrell returned as another one of his former “SNL” characters: Jacob Silj, whose loud monotone voice is an effect of “voice immodulation syndrome.”

In light of the Philadelphia Eagles and New England Patriots officially heading to the Super Bowl next week -- a nightmare pairing for New York Giants fans -- Jost, who is clearly bitter about having to stand behind one of the worst teams in the NFL this season, attempted to belittle fans of football’s two reigning teams.

“The Philadelphia Eagles will face the New England Patriots in this year’s Super Bowl, making it the first Super Bowl where the fans have even worse brain damage than the players,” Jost said. “Yeah. Go Giants.”

Chris Stapleton performed as this week’s musical guest, playing “Midnight Train to Memphis” and “Hard Livin’,” both from his latest album, “From A Room: Volume 2.” Stapleton surprised fans by welcoming fellow country singer-songwriter Sturgill Simpson on stage to perform both songs as duets.