Winter storm warning issued for Philly region ahead of nor'easter 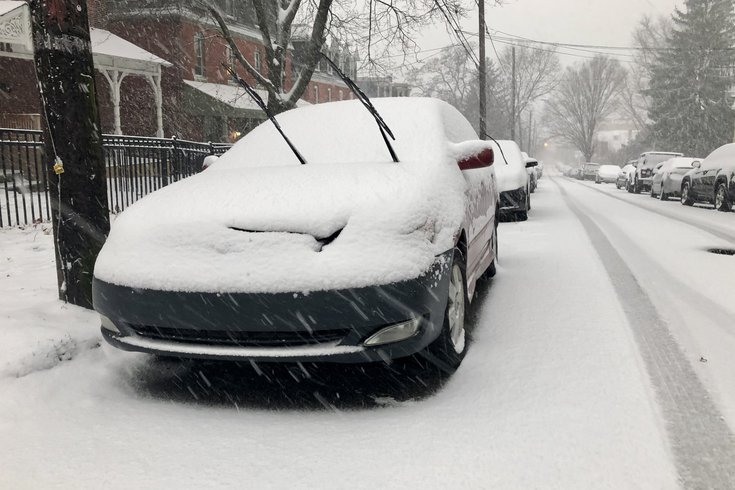 Snowfall is expected to begin across the Philly region on Sunday afternoon and last through Tuesday. The photo above shows snow falling during the mid-December storm that hit the region.

UPDATE: A winter storm warning has been issued by the National Weather Service for the entire Philly region, as a nor'easter is expected to arrive on Sunday afternoon and last until Tuesday.

The winter storm warning, which takes effect at 1 p.m. on Sunday and will continue through 10 a.m. on Tuesday, is calling for heavy snow accumulations of approximately 7-14 inches and wind speeds of 45 mph.

LATEST: Here's what you need to know about the nor'easter hitting the Philly region

Roughly 1-2 inches of snowfall is expected to begin after 3 p.m. on Sunday. Overnight, approximately 3-5 inches of snow and sleet could fall.

The storm will turn back to snow through Monday morning and early Monday afternoon before becoming a mix of rain and snow after 2 p.m. Roughly 2-4 more inches of snow and sleet are forecasted on Monday, with an additional 1-3 inches of snow expected on Monday night.

The snow is expected to continue through Tuesday morning before turning into a mix of snow and rain. The nor'easter is forecasted to clear out by Tuesday night.

Those who do not have to conduct essential travel are encouraged to stay at home for the duration of the storm.

Here is the updated National Weather Service forecast for Philadelphia.

UPDATE: Forecasters predict Philadelphia County could see 6 to 9 inches of snow early next week, as of 11 a.m. Saturday.

A Hazardous Weather Outlook was also issued for Philadelphia County.

Pull out your parkas — snow is predicted for the Philadelphia region early next week.

Forecasts show snow will start falling in the Philadelphia region on Sunday afternoon as a winter storm moves across the country to the Northeast. The storm could hang around through Tuesday, bringing various periods of snow and other wintery precipitation.

The AccuWeather forecast is predicting between 3-6 inches of snow in the Philly area. The National Weather Service's 7-day forecast says less than a half inch of snow will fall in Philadelphia on Sunday during the day. Snow also is likely for Sunday night, Monday and Tuesday, but the NWS meteorologists have not specified how much yet.

The storm will stick around through Tuesday, though snow accumulation will start to decline starting Monday evening. Sleet, freezing rain and rain is expected in coastal communities.

Accumulation will vary depending on the storm's track, though temperatures are not expected to get higher than the low 30s, meaning any precipitation in the area will likely be snow or a wintery mix.

This follows the mid-December nor'easter that brought 6 inches of snow to Philadelphia — the most snow the city's seen since March 2018, according to the National Weather Service.

FRIDAY: Blustery winds, gusting as fast as 40 mph during the day, will subside at night, decreasing to 5-10 mph. The high temperature during the day will stay below freezing at 27 degrees. The overnight low will be 17.

SATURDAY: Sunny with a high of 32 degrees during the day. Temperatures will drop to 20 degrees in the evening.

SUNDAY: A chance of snow after 11 a.m. Mostly cloudy with a high near 32. Chance of precipitation is 40% during the day. Most of the snow will fall after 8 p.m., with precipitation at 80% and temperatures at 29 degrees.

MONDAY: Snow is expected with chance of precipitation at 90% and temperature highs of 35 degrees. Snowfall chances stay at 90% though the night with a high of 30 degrees.

TUESDAY: Snow is likely before 11 a.m. before turning into rain later in the day with a high of 36 degrees.

Some restaurants in the city have started preparing for the inclement weather, offering hot cocktails and fur hats, FOX29 reported.

Coppas on South Street is take-out only, but said they have hot apple cider. Across the street at MikBoy, employees say they're working to keep customers comfortable through the winter weather. "The last snowstorm that we had was actually great for us. People love snow days in Philly. It’s kind of a nice bar hopping experience," Yocum said.