Winter looks ready to accumulate on streets and sidewalks for the first time this season in the Philadelphia region.

A wintry mix of snow, freezing rain and sleet could impact the Monday morning commute, according to forecasters.

The most likely scenario is accumulations of as much as two inches in the northern regions of Chester, Montgomery and Bucks counties, with less than an inch in the city and no measurable precipitation in South Jersey. Hazardous road conditions are possible in the northern suburbs and as far south as I-76, forecasters said.

An update Sunday from the National Weather Service expanded the region's winter weather advisory to the Pennsylvania Turnpike Corridor. 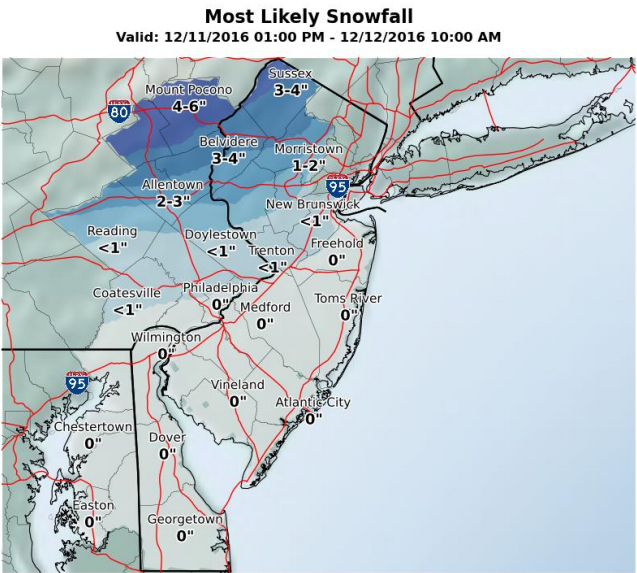 • Camden County: in effect through 7 a.m. Sunday. Persons seeking shelter in a warming center should contact their local municipality.

Here's the forecasts for Philadelphia and the Poconos:

Sunday: A chance of rain after 1 p.m. Cloudy, with a high near 39. Calm wind becoming south 5 to 8 mph in the afternoon. Chance of precipitation is 30 percent. New precipitation amounts of less than a tenth of an inch possible.

Sunday night: A slight chance of snow for the region is possible before 11 p.m. with rain and sleet possible from 11 p.m. until 1 a.m. with a low around 35. South wind around 5 to 7 mph. Chance of precipitation is 100 percent. Little snow is expected to accumulate while a chance of sleet accumulation is more possible.

Monday: Rain, mainly before noon. High near 47. Chance of precipitation is 80 percent. New precipitation amounts of less than a tenth of an inch possible.

Monday night: Mostly cloudy, with a low around 30. Winds expected to reach 7 to 14 miles per hour.

Tuesday: Partly sunny, with a high near 43.

Sunday: A chance of snow. Cloudy, with a high near 31. South wind around 8 mph. Chance of precipitation is 60 percent. New snow accumulation of less than a half inch possible.

Sunday Night: Snow likely before 4 a.m.., then sleet, possibly mixed with snow. Low around 27. Chance of precipitation is 100 percent. Two to four inches of snow and sleet accumulation possible.

Monday: Freezing rain and sleet expected to turn into rain after 9 a.m. High near 43. Chance of precipitation is 80 percent. Less than half an inch of sleet possible.

Monday night: Cloudy with a low of 23. Northwest winds between 3 to 8 mph expected.

Tuesday: Partly sunny, with a high near 39.