So what if Union's C.J. Sapong is scoring on tap-ins and penalties? 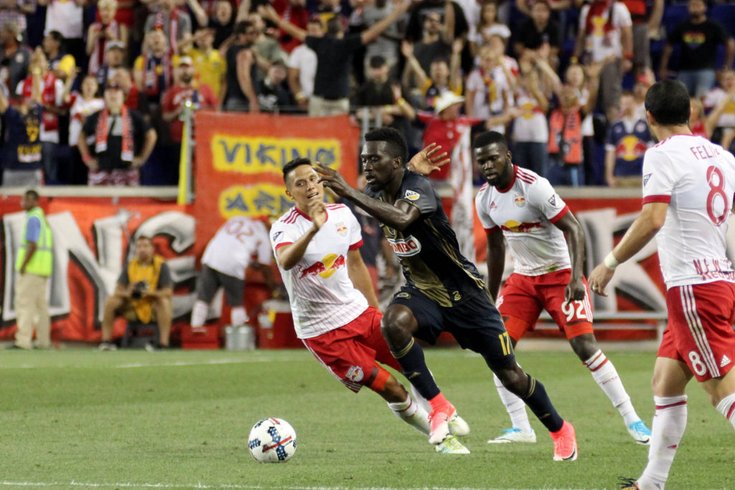 Union forward C.J. Sapong has a career-high 12 goals through 23 games this season.

I have read some fan comments in recent weeks that sort of bemoan the fact that C.J. Sapong reached double-digit goals on tap-ins and penalties.

The thought is that a new career high comes with some sort of asterisk due to the type of goals he's scoring, with a highlight reel heavy on poaching and light on meaningful strikes.

I don't know how many Union fans feel that way, but at the risk of beating up on the straw man, it's a topic I think is worth exploring.

Penalties are part of the game

In the interest of context, it's fair to point out how many penalties a goal scorer has converted, and whether or not those PKs were "earned."

Sapong is three-for-three in that department this season, scoring in the Red Bull, Colorado, and New England wins. The first penalty was earned by Chris Pontius, who crossed the ball into the arm of a Red Bull defender. The second penalty was earned by nobody in particular, when a Colorado center back handled inside the box. Jay Simpson was the closest Union player.

The third penalty was another in-box handball, with Sapong knocking it into Benjamin Angoua.

You could say, then, that Sapong converted two penalties that he didn't earn.

On the flipside, he also earned two penalties that he didn't take.

The first was in Kansas City, where Roland Alberg converted after C.J. was chopped down by Benny Feilhaber. The second was in the Columbus win, with the famous argument between teammates ultimately resulting in an Alberg miss.

In the end, the whole thing is a wash, right? Sapong took two penalties he didn't earn but relinquished two that he did earn.

It is what it is.

If you look at the MLS scoring charts, nine of the top ten players have converted at least one penalty this season:

Bradley Wright-Phillips is the only guy up there without a penalty conversion (or attempt) this year.

If you removed all of the converted penalties from the charts, this is what it would look like:

Sapong would still be in the top ten.

For further context, you could go down the rest of the list and determine whether those other players converted penalties that they earned, or if they simply converted in place of their teammates.

Like it or not, penalties are always going to be context-heavy when we try to determine which goal scorers have the most efficient outputs.

Poaching as a skill

You can't score a tap-in if you're not there in the first place.

Sounds dumb, but that's a skill. Some of soccer's greatest goal scorers have a knack for losing their marks, timing a late run, ghosting to the back post, or positioning for rebounds.

In the case of the Union's third goal on Saturday night, it was a passing combination and trailing run that opened the door for the easiest finish of Sapong's career.

Sapong gets the helper from Ilsinho for his 12th goal of the year. #JoinOrDie https://t.co/sRwKmOwzgf

That sequence starts with hold-up play and a flick for Ilsinho, followed by a return pass into the channel. When three Dallas players fall asleep, Sapong simply ghosts into the six yard area to finish the squared ball.

We've seen a lot of that this year, where he's been rewarded just for getting into the box and providing a target.

Maybe the best goal C.J. scored this year was the equalizer against Toronto, when he had the rare chance to actually get behind a defender and latch onto a through-ball.

That's a brilliant back-shoulder peel in the vein of a Marco Di Vaio or Filippo Inzaghi, and it shows that C.J. can actually do some different things if he gets that kind of service from central areas of the field.

You also have to give him credit for the small things that go unnoticed.

In that play, his diagonal movement into the channel actually frees up a bit of space for Fabian Herbers to move the ball forward.

You see a moment of hesitation there, with Nick Hagglund and Drew Moor backpedalling while trying to figure out who should go with Sapong and who should step to Herbers. Michael Bradley is trying to cut the angle while wingback Justin Morrow has to honor Alejandro Bedoya's movement on the right.

When the center backs do hold their line, Sapong adjusts, hiding on the shoulder and detaching at the last minute. He takes a touch around the goalkeeper for an easy finish.

Beyond all of that, scoring goals might not even be C.J.'s main role on this team. That's a funky way to describe a lone striker, but it's true.

The elevated production has not come at the cost of his hold-up and center forward duties. Sapong has suffered 65 fouls this year, which puts him in a league-wide third place tie. Among those top ten goal scorers, he's the outright leader, eating 26 more fouls than second place Villa.

The takeaway there is that he's scoring goals while still getting clobbered and earning free kicks for his team. 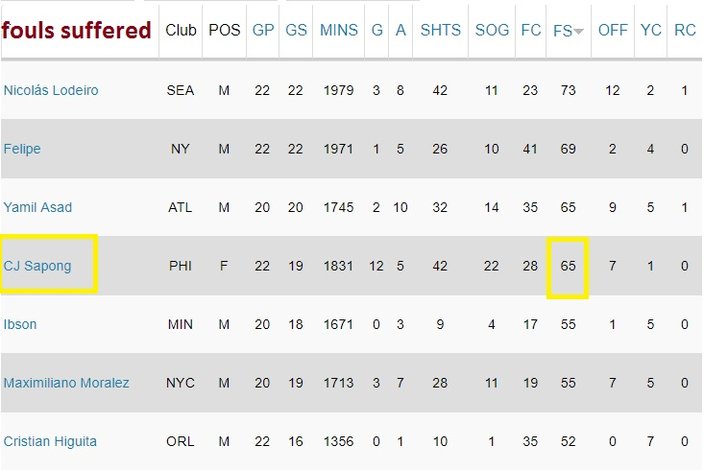 According to whoscored.com, Sapong is also top-five in aerials won per game (3) and top-ten in overall player ratings (7.33). Aggregate scoring on that website also lists Sapong in the top-ten for "Man of the Match" performances in 2017.

Another thing to consider is that Sapong plays in one of the league's most defensive systems. Union wingers are asked to do a lot in the two-way game. They aren't slashing behind opponents with regularity. Giliano Wijnaldum and Ray Gaddis rarely get into crossing positions. The team has also been lacking in production from the #10 position, which hurts Sapong's output. How many goals could he score in front of Victor Vazquez or Alex?

We'll probably never know, unless Ilsinho keeps doing what he did this past weekend.

No one complained about these guys

There was a guy named Shaun Goater who scored 103 goals for Manchester City, none of which were long-distance bangers or highlight-reel candidates.

But they counted just the same, and fans came up with a slogan for the Bermuda forward:

Feed the goat and he will score!

History is full of guys like that, strikers who gobble up scraps or tap home from close range or pounce on defensive mistakes. Others might be caught offside nine times in a row, only to be flush with the line on the tenth try. Di Vaio scored 20 goals while being whistled off 78 times in 2013. Sir Alex Ferguson famously said that Inzaghi was "born offside."

And think about how many players have made a living out of "right place, right time."

Ruud Van Nistelrooy was lethal inside the box, but rarely, if ever, did he score outside of it. Javier Hernandez attacks, poaches, and finishes among the best. Ally McCoist probably scored more than 250 close-range goals for Rangers. Chris Wondolowski has done similar things in Major League Soccer.

So it shouldn't really matter how they go in for C.J. Sapong. With the work he puts into his other responsibilities, tap-ins and penalties should be a reward for getting roughed up every game in an attempt to make the rest of his teammates successful.