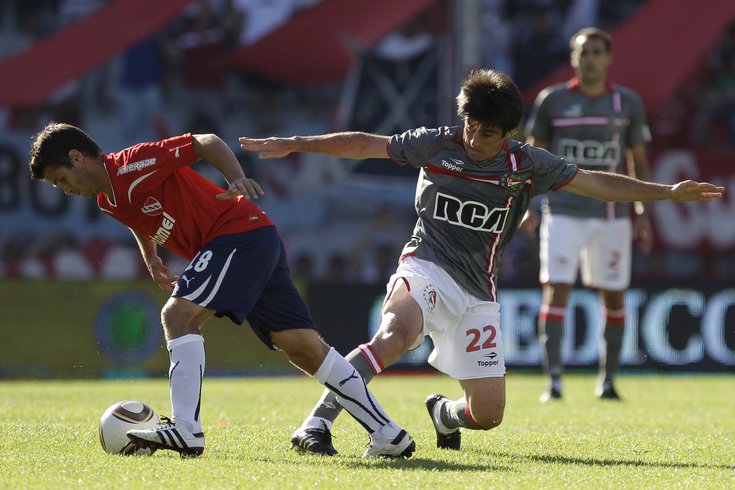 I have no idea if Nicolas Martinez was at Union training on Wednesday afternoon since the session wrapped up 20 minutes before media actually arrived in Chester.

The 29-year-old Argentinian midfielder is the subject of transfer rumors that first popped up on Monday night with a Greek-language article discussing a possible loan from Olympiacos to Philadelphia.

"It's a player we're familiar with, a player that, we're always looking to upgrade our roster," head coach Jim Curtin said after training. "But at this time he's still Olympiacos' property, so to talk about him one way or another is not something we're going to do."

That's as close to a "no comment" as you'll get from Curtin, which suggests to me that there's probably something to the rumor. The team has been sniffing around for midfield reinforcements, with Costa Rica international Elias Aguilar training in Chester just a few weeks ago.

Martinez is the younger brother of Juan Manuel Martinez, the former Real Salt Lake attacker who played a season and a half in Major League Soccer before returning to Argentina.

Both brothers could be considered journeymen, with "Nico" last playing on loan for Australia's Western Sydney Wanderers. The prior season was spent on loan with Cypriot club Anorthosis Famagusta.

He was purchased by Olympiacos back in 2015 after two successful seasons with a much smaller Greek club called Panetolikos.

His best year appears to be the 2014/2015 campaign when he finished with three goals and 10 assists in 32 league games. The most recent A-League campaign featured four goals and eight assists in 26 games.

Martinez doesn't appear to be part of Olympiacos' plans moving forward and he reportedly has one year left on his contract.

Highlight videos suggest that he's a tricky attacking midfielder who can play as an inverted winger or a number ten. He's heavily left-footed and likes to cut inside on that strong peg in a way that's not dissimilar from what we saw in ex-Union CAM Cristian Maidana.

At first glance, Martinez appears to be a better dribbler and tight-space operator, while Maidana was a slower player who excelled in making the final pass. For what it's worth, "Chaco" did finish with 26 assists in two MLS seasons, but was not a goal scorer and did go through some patches where he wasn't serving up helpers at a consistent rate.

Over at Westsydneyfootball.com, a Union fan asked about Martinez, which resulted in a couple of solid scouting reports, including this:

"We predominately played him as an inverted right winger in a 4-2-3-1 system. Can play #10, but shooting isn't one of his strengths. He has good ball control, can pick a pass, likes to take players on & beat them with his evasive skills, but can also be guilty of over playing a situation."

There was also this:

"His attitude is excellent. Didn't come across as arrogant, despite being by far our best player until we recruited a young Australian player mid-season (Terry Antonis). It's also worth noting that he signed with us really late in the transfer window, after reportedly being forced to train on his own in Greece. When he came to Australia, he was nowhere near match fit, so if he arrives in the US reasonably fit (and/or get's a proper preseason), it's likely you'll get more out of him that we did."

On the surface, this might look like the Union again going the Moneyball route for a cheap loanee or free transfer, but if the younger Martinez is anything like his brother, he could be exactly what this club needs in the midfield.