For the slumping Union, scoring chances are few and far between 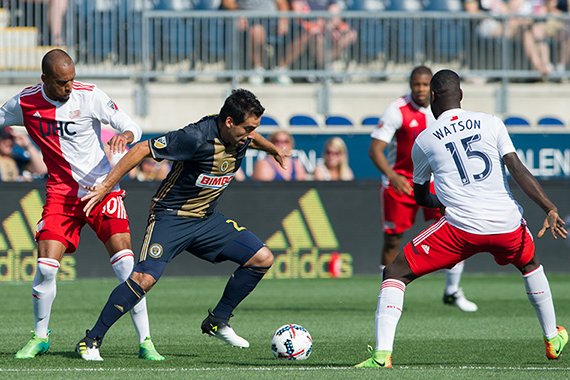 You're not going to win a game when you finish with zero shots on goal.

That's what happened on Saturday night for the Philadelphia Union, who fell eight points behind wild-card holder Columbus with a 1-0 loss in Ohio.

A return trip with the Crew takes place Wednesday at home, with a chance to either reclaim those three points or slide even further out of playoff contention.

Losing both games of this home-and-home series might even do it for the 2017 season, with the Union then having to somehow make up an 11-point deficit with the toughest remaining schedule in Major League soccer.

"We actually had a lot of possession, but there wasn’t a lot of purpose with the possession," head coach Jim Curtin said of Saturday's loss. "We didn’t make Columbus backpedal or have any difficult situations to deal with. So from that standpoint, a frustrating night, credit to them.

"It’s always tough to lose on an own-goal, but at the same time we’ll have to rebound quickly and go again against Columbus on Wednesday."

The Crew winner was turned into the Union net by Josh Yaro, who blocked a Justin Meram shot at the edge of the box but couldn't adjust his feet quickly enough to make a proper clearance.

At the other end, Philadelphia managed just three shots in the entire game, with Marcus Epps going off-target twice and Jay Simpson seeing a second-half effort blocked from about 16 yards out.

This is the Union's shooting chart with corresponding key passes: 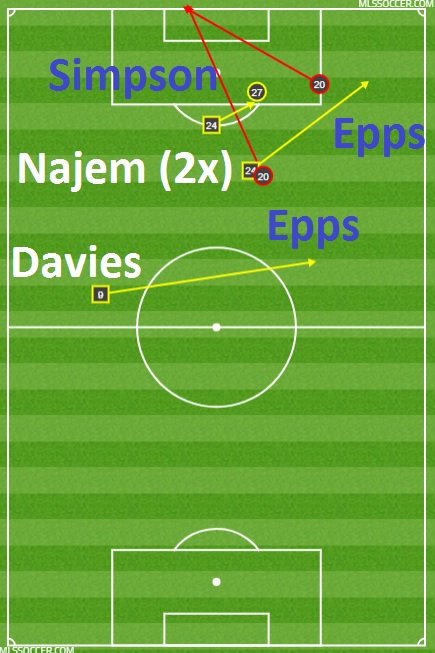 In this case, you had a rookie right winger (Epps) and first-year homegrown player (Adam Najem) provide more score-sheet impact than the 31-year-old Brazilian veteran and former UEFA Cup winner.

The entire Union team finished with three shots and three key passes. Zero fouls were won inside the attacking half of the field and, by my count, only 13 passes successfully entered the final third. There were no defensive actions in that area of the field, which is why you didn't see the press and turnover situations that occurred last Wednesday in Montreal.

In the team passing chart, look at the lack of success in and around the Columbus box: 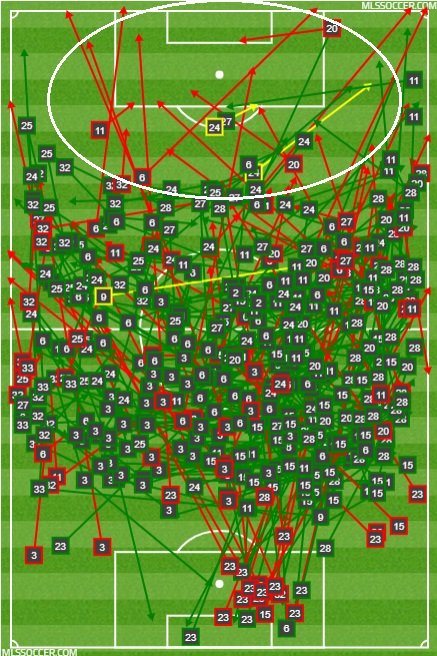 It was better in last week's loss, when the Union were actually able to convert a pair of turnovers into scoring chances.

The first chance was clipped wide of the net by Fafa Picault, who made amends about 40 minutes later when he again stole the ball and this time scored to level the game.

But even with the higher pressure and presence of regular starter C.J. Sapong, the Union only put two of ten shots on target.

From the Montreal loss, here's the overlay of key passes with shots on frame: 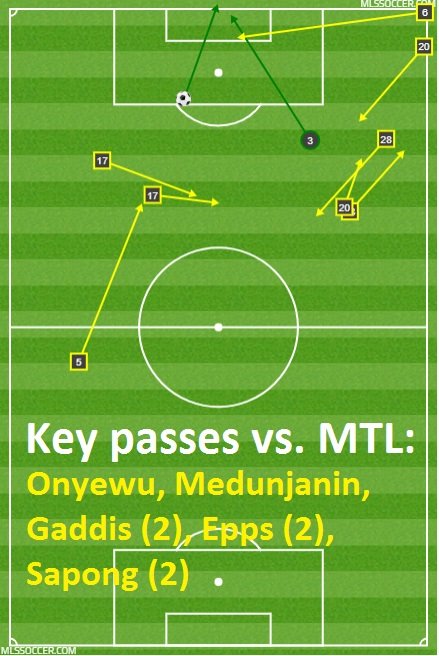 That's better than Wednesday night, but you see the goal obviously did not even take place from Union build-up play, it was created with defense, just like the first blown opportunity in the game's opening minutes.

Totally absent from that chart again is Ilsinho, plus Roland Alberg, who played as the number ten.

They finished the game with this combined line:

This isn't what you want to see from 50 percent of your front four: 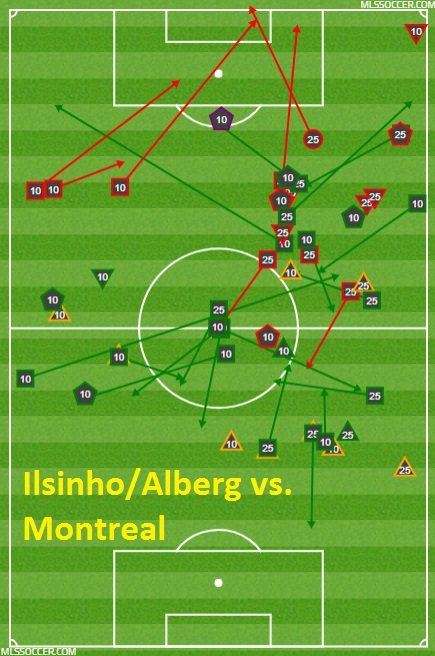 League-wide, Philadelphia is now 21st out of 22 teams with 206 shot attempts this year. Real Salt Lake tops the charts with 326 attempts while Colorado is dead last with 176 efforts.

As far as shots on goal, the Union are 17th overall, which means that their on-frame rate of 40 percent (82 of 206 tries) is a little bit better than some of the league's other strugglers. Five of 26 Union goals have come from the penalty spot this year, which skews the offensive numbers somewhat significantly, considering that only four teams have had five or more PK attempts in 2017.

If you dig a little bit deeper, you find that the Union have two players in the top 50 of the "key pass per game" category. Haris Medunjanin is 13th overall and Chris Pontius comes in at No. 49.

In shots per game, Sapong is the only Union player in the top 50, and he ranks 47th overall.

The Union don't have a top-30 representative in through-ball stats, but Medunjanin is 8th in the crosses per game category, which again lends itself to the idea that the No. 6 is the most effective creator on the team.

Ilsinho, Alberg, and Alejandro Bedoya are nowhere to be found when it comes to pretty much every offensive category out there. In Bedoya's case, that's not really his role these days, but they did try him as a number ten earlier in the season with similar ineffectiveness.

This is a team that's really struggling with chance creation right now, something that should hopefully improve with Pontius returning from the Gold Cup and the regular starting XI being back on the field.

And if it doesn't improve, we're looking at another Union season that will be pretty much wrapped up by the time September rolls around.