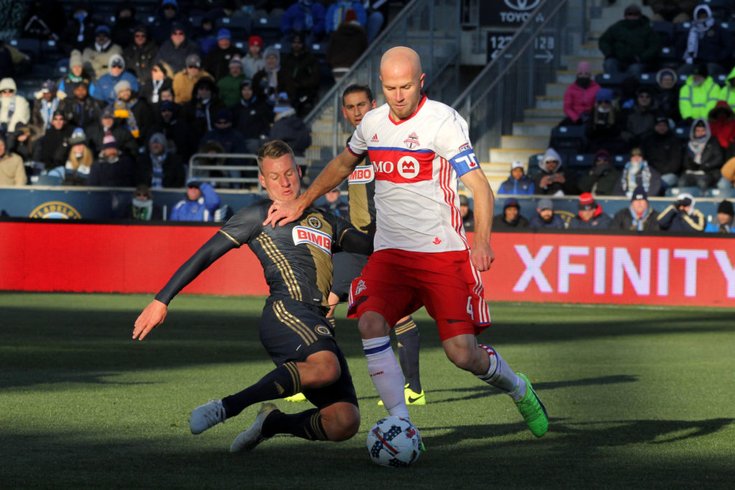 The newest addition to the Philadelphia Union family is less than a day old.

Captain Alejandro Bedoya is now a father of two, welcoming his daughter Milena into the world on Tuesday morning.

The 30-year-old midfielder recently departed the U.S. national team to be with his wife and will likely also miss the Union's Wednesday night matchup in Montreal, as the team restarts MLS play following the Swansea City friendly and Gold Cup break.

"We'll be in touch with Ale and see where he's at physically and mentally, and (make sure) that everybody is happy and healthy," Union head coach Jim Curtin told reporters on Tuesday morning. "We'll make a decision from there. Obviously we're a much better soccer team when he's there with us, but there are certain things that are more important than soccer. I'd be pretty darn selfish to take that away from him."

This morning, we welcomed Milena Karin Bedoya into our world!Couldn't be more excited.
Mom & baby are perfectly healthy. Dad is fine too.😜🙏

Winger Chris Pontius will remain with the USMNT ahead of Wednesday night's matchup with El Salvador at Lincoln Financial Field. Goalkeeper Andre Blake is also missing as he captains Jamaica in the Gold Cup quarterfinals.

Also absent are Derrick Jones, who suffered a concussion in last weekend's friendly, and Fabian Herbers, who underwent sports hernia surgery Tuesday morning. That's the result of a setback from the abductor injury he originally suffered at the end of May.

Herbers is expected to miss six to seven weeks.

With Pontius and Herbers both out, Curtin will likely be choosing between Ilsinho and Marcus Epps as his starting right winger in Quebec. Moving Ilsinho back to the wing would free up a start for Roland Alberg at the number ten position.

On Wednesday night, the U.S. national team will be playing at the same time as the Union.

It's another goofy MLS scheduling quirk, with the decision to break for the Gold Cup group stages but resume league play during the knockout rounds.

It also results two consecutive weeks of short-rest games, with the Union stuffing four matches into an eleven-day stretch.

"It's a tricky time, the combination of the Gold Cup and the schedule," Curtin said. "(MLS) gave us (last) Saturday off, which was, I guess, nice. But then they crammed in Wednesday/Saturday and Wednesday/Saturday, so you're playing the same amount of games. I almost would have rather just kept in the rhythm of a weekly game while missing a few guys here and there.

"It's a challenge. The national team has a job to do and we always want players to represent our country, so that part is special, but yea, we're stronger when Andre and Chris are here to choose from. We're a little short-handed."

Points at a premium

The Union play four straight games against Eastern Conference foes currently occupying middle and bottom table positions. Wednesday's Montreal game is followed by an unusual home-and-home with Columbus, before Philly hits the road for a matchup with New England.

That leads into a rough back-end schedule with trips to Toronto, Chicago, San Jose, and Atlanta.

So these games are critical, with four-straight "six-pointers" leading into a home game with Western Conference powerhouse FC Dallas.

"When the schedule comes out, you tend to look at it and make these quick, snap-shot judgments, but you never keep in mind that MLS completely changes year to year in terms of who's at the top," the head coach said. "When you see those two Chicago matchups late, you looked at it and said, 'okay, that could be good,' but now it's not. Again, MLS changes quickly, and the fact that we've had most of our games at home this year, that inches up and the strength of schedule becomes difficult as they do those graphs and say who has the toughest schedule.

"Those things can change in an instant, though, with an injury to a certain player or guys getting called up to national teams, so a lot of it is a little bit of luck and timing, but you want to get every point possible. Yes, on paper, these games are very important just because of where Montreal and Columbus sit in the standings.

"It's three games in a week's time where you could see some real separation from one of us if we can grab all three points, or it could be like nothing happened, which doesn't help any of us. From my standpoint, we have to be aggressive about going after points on the road now because we started slow."

“Guys have a big opportunity now to step up and do a good job for us.”#JoinOrDie pic.twitter.com/osNzcWcMqo