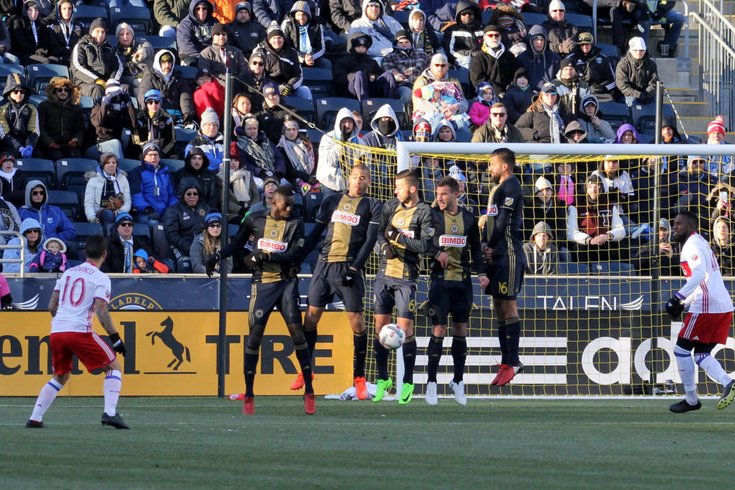 The Union have the toughest remaining schedule in Major League Soccer, which includes an August trip to Toronto.

A recent data parsing at MLSSoccer.com concludes that the Philadelphia Union have the toughest remaining schedule in 2017.

That's not great news for a team that normally plateaus in August before underperforming in September and October.

As we return to league play following the Gold Cup break, the Union currently occupy eighth place in the Eastern Conference with a record of six wins, seven losses, and five draws. If you scrap that horrendous 0-4-4 start, Jim Curtin's squad is 6-3-1 dating back to May 6th.

The issue is that there doesn't seem to be that signature win on the resume, which we discussed last week. Outside of the Houston win, the Union's five other victories have come against one mid-table and four bottom-dwelling teams.

It's a concern going forward, with a backloaded schedule that features some of the league's best teams.

Here are the remaining opponents the Union will play, with their current records and places in the table:

Of 16 remaining games, that's 10 against teams currently in playoff position. Seven games are at home and nine on the road, including rough assignments at San Jose, Chicago, Atlanta, and Toronto.

Getting Dallas and Seattle at home is a positive, and the pair of matchups against Montreal and Columbus look like good opportunities for road points right now.

Laying it out again, let's do a less-than-scientific exercise to find out where the Union can grab points in the season's second-half.

This is how I think the results might go:

That's a prediction of 20 points from the last sixteen games, for a 1.25 points-per-game average down the stretch.

That's almost exactly what we saw last year, when the club finished on 42 points with an 11-14-9 mark. They ended up tied with New England for sixth place and got into the playoffs via tiebreaker.

That's basically what I'd project for this season, a finish in the six to eight range with a point total in the low- to mid-forties.

For context, there have been four sixth-place teams in the postseason since MLS expanded the playoffs in 2015. Those clubs finished with 49, 51, 46, and 42 points. The Union were that final team, getting into the postseason with the lowest point total of the four.

The red line looks like it might be higher this year, since the East is better than the West for the first time in a long time. Columbus, for example, would be 4th place in the west in the current standings. Right now they're sixth in the east on 28 points.

If the Crew, now occupying the final Eastern Conference playoff spot, pace at the same 20 points that Philly does, they'll claim the wild card with 48 points total.

It just doesn't feel like 42 to 45 points is going to be enough for a playoff spot this season, so the Union need to hold serve at home and flip one of those difficult road games, either Red Bull, San Jose, or Atlanta. I can't see this team winning in Toronto or Chicago, and New England is always a tricky trip along with a total wild card in expansion Minnesota. Seattle and Orlando are penciled in for three points, but that might even be a stretch considering how Philly historically plays in October.

We know the Union are a much-improved team, but are there enough points out there to get this club back into the playoffs?