Winter is not coming: A less-than-serious preview of the Philadelphia Union's 'Game of Thrones' night 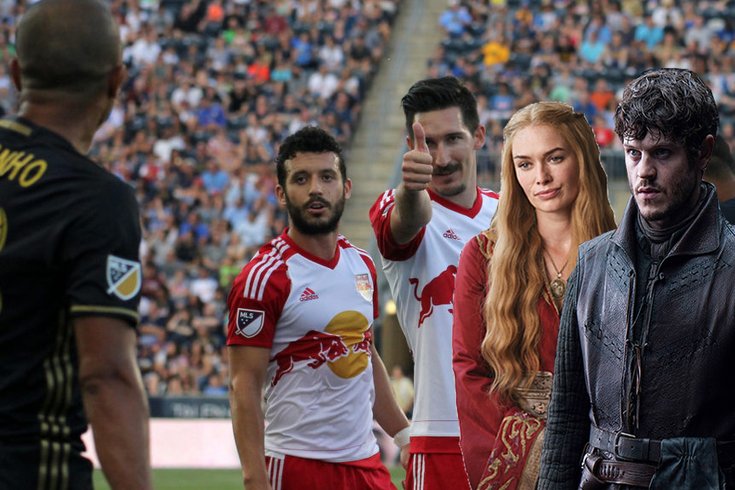 When you play the game of soccer, you win, lose or draw.

And when you play the Game of Thrones, you win ... or you die.

If given the choice, I'm going with the former over the latter, which just feels more reassuring in the risk vs. reward department.

A new season of television's most popular show debuts this weekend, so the Philadelphia Union have branded Saturday's exhibition game against Swansea City as "Game of Thrones" night at Talen Energy Stadium. That includes GOT-themed graphics, exclusive merchandise, "Trial by Combat" activities on the plaza, and pregame and halftime performances.

It does get you thinking; the Philadelphia Union really do have a lot in common with this fantasy story, a show that has delivered six seasons of shattered dreams and countless betrayals. The ups and downs of GOT fandom aren't that dissimilar from the typical plight of a Philadelphia sports fan, who watches both HBO and Comcast SportsNet with equal apprehension, knowing that some sort of soul-crushing moment is just around the corner.

That said, here's a mostly corny look at how George R. R. Martin's masterpieces match up with Union and soccer lore.

The Battle of the Bastards

A classic underdog fight with a surprise twist at the end.

This reminds me of one of those standard Union smash and grabs, maybe a stolen road point in Kansas City or the 2014 U.S. Open Cup semifinal win in Dallas.

Everybody knew that Ramsay Bolton (FC Dallas) had the bigger army. He was playing on his home turf (Toyota Stadium). He had the backing of the most powerful northern house, while Jon Snow's army was a ragtag group of scrappy punchers.

Just when it looked like they were cooked, the road teams turned it around at the end with great goalkeeping, or, in Snow's case, the worst kept secret of all time.

It's a battle that Union season ticket holders fight every season.

"I'm definitely not going to renew this year!"

Then the team rips off a couple of wins or makes a few interesting signings and next thing you know, you're on the phone with your ticket sales rep.

Just like the show's most popular character, you can't kill off diehard Union fans, who annually sign up for more suffering.

Like many Deadwood fans, I was excited to hear about Ian McShane's season-six appearance.

Unfortunately, he ended up playing a minor role before his character went the way of basically every other character.

A lot of Union players have had similarly short tenures, like David Myrie, who was cut after the club's very first game. Carlos Ruiz was transferred halfway through the season. Rais Mbolhi was benched and flew back to France. Kai Herdling and Lio Pajoy and Bakary Soumare and... ah whatever, you get the point.

That feeling when you're trying to keep a clean sheet but the other team is battering your goal with shot attempts in stoppage time.

The worst story arc of all time

The "Sand Snakes" were an intriguing crop of new female characters introduced in season five.

Unfortunately, their plotline was disappointing and left a lot to be desired, like MLS officiating or last year's 0-0 cup final.

The mercenary Bronn got the better of Ser Vardis Egan in season one, episode six.

He didn't do a lot of fighting though, instead dodging attacks, moving around the Eyrie throne room, and outsmarting a guy with heavy armor and a shield.

It's like the 2017 Europa League final, with a young and exciting Ajax team going up against a boring and defensive Jose Mourinho-coached team. Manchester United parked the bus, played "anti-football," and won another trophy in the process.

'You don't fight with honor!"

We're making up the rules on the fly

Remember when the "First Sword of Braavos," Syrio Forel, fought five members of the Kingsguard with a wooden sword?

It's like the Philadelphia Union trying to compete in a league that gives preferential treatment to the likes of Toronto and Seattle, who signed Michael Bradley and Clint Dempsey for free, while the Union had to go through the allocation order to acquire Maurice Edu.

"What I will say is that as an emerging league, there are times when we are figuring out those rules as we go along. So if - and I don't know that the Clint Dempsey case is an example of that - there could be something that comes up where we say, 'this is something that we need to figure out now, because we will lose this player or we won't be able to sign this player, or it would prevent us from being competitive in an international competition,' or whatever it might be."

Khaleesi finally does something

That's roughly the same amount of of time it takes to get to Talen Energy Stadium via mass transit, or to exit the parking lots after a game.

Let's just blow it all up

An easy metaphor for the roster deconstruction we saw at the end of 2012.

With John Hackworth taking over the managerial role, the new staff immediately jettisoned most of Peter Nowak's foreign signings, and a couple of domestic players too.

The Union dismissed 10 players at the end of a drab campaign that featured 10 wins, 18 losses, and six draws:

"You have nothing to fear, your grace."

20 American soccer characters and their Game of Thrones counterparts:

Jim Curtin – Tormund Giantsbane
He's tall, he's got red hair, and he's sort of thrust into a leadership role with few resources to work with.

Earnie Stewart – Tyrion Lannister
Shrewd and resourceful, he's in a new role on a different continent.

Andre Blake – Hodor
Not only does he hold the door, he shuts it entirely on most teams.

Oguchi Onyewu – the Mountain|
He's big and strong and wins most of his 1v1 battles.

Danny Califf – Ned Stark
He wasn't around for too long, but he was definitely an enjoyable character.

Carlos Valdes – Petyr Baelish
They're committed ... until they're not.

Ray Gaddis – Grey Worm
Reliable and sturdy, he's there when you need him.

Eduardo Coudet – King Robert Baratheon
Their roles were short-lived, and their best days were behind them, but you liked them anyway.

John Hackworth – Mance Rayder
A good guy who brought everybody together, just couldn't compete with a better-equipped army.

Alejandro Bedoya – Bronn
Because they both tell it how it is.

Roger Torres – Robb Stark
Guys who should have stuck around.

Jordan Harvey – Jon Snow
Exiled to the north for no good reason.

Porfirio Lopez - Missandei
Two of the best haircuts in their respective roles.

The New England Revolution – Stannis Baratheon
Had multiple opportunities to win it all, just couldn't get the job done.