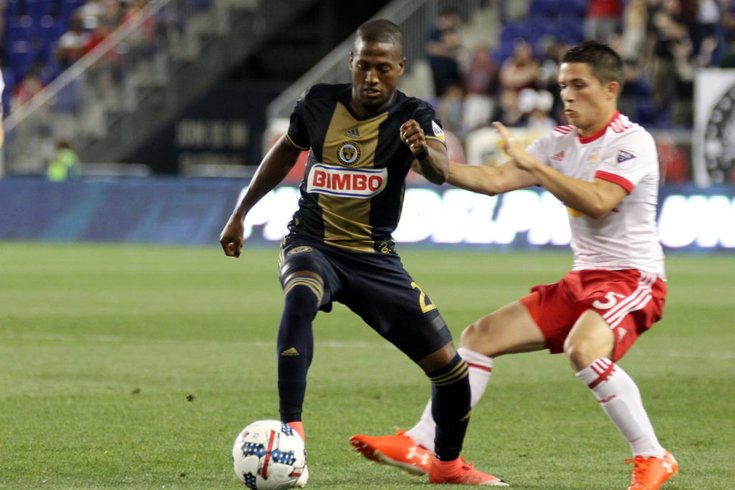 It was the best and worst of Fafa Picault in a five-second sequence.

Just two minutes into Wednesday night's game in Montreal, the Union winger dispossessed Laurent Ciman with a smart piece of pressure, charged towards goal, and inexplicably clipped a tight-angle shot wide of the far post.

That drew the ire of teammates Ilsinho and Roland Alberg, who were both in position to knock in a cutback or squared pass for the game's opening goal.

The resulting body language looked rather poor, with demonstrative gestures being flung in both directions.

Later in the half, a similar sequence played out, with Picault this time pouncing on an atrocious Chris Duvall back pass to put himself 1v1 with goalkeeper Evan Bush.

Picault went five-hole on Bush, jogged past Ilsinho, and looked visibly perturbed, making a dismissive gesture towards an off-screen teammate and brushing off approaches from Warren Creavalle and Haris Medunjanin.

On a Friday conference call, manager Jim Curtin talked about those two scenarios and the resulting argument they spurred during intermission.

"The guys were disappointed that he didn't square the ball," Curtin said of the first play. "We talked about it at halftime. It was as heated a conversation as we've had in our group and I actually liked it. Guys were yelling at each other and were on each other with the constructive approach of, 'we want to win.' We want to win these games on the road, and there are difficult, heat-of-the-moment things that are said and split-second decisions that are made on the field. Fafa knows, in that situation, that if you're going to shoot, you better score.

"The 90 percent or 95 percent option is to square it across for a tap-in. There were some guys who were disappointed in his play. The one thing to be said, though, about Fafa, is that he puts the work in defensively, and some of the guys that were upset with him didn't have their best night either."

That's a not-so-subtle allusion to the mediocre performances of Alberg and Ilsinho, who finished the game with one shot attempt, 17 completed passes, and a 14 percent dribble rate while losing the ball six times in possession.

For what it's worth, Curtin did go on the record Friday with his view that Alberg's late volley, a goal called back for offside, was incorrectly ruled. A reversal there would have leveled the match at two and given Alberg his fifth tally of the season.

"It's a two-way street," said Curtin. "Again, the right play is to square it and we get the tap-in and that changes the game at 1-0. It's fair for guys to be upset with (Picault) in that regard. He knows, and we talked through it at halftime, resolved it, and we'll move on from it. But they're all competitors. They all want to win and when we make wrong decisions we have to talk through them and hopefully, in the future, learn from them. When we're on the road and we have those opportunities in the first 15 minutes of games, we need to take those opportunities more clinically than we did against Montreal."