Even on a record-setting night, Sapong's goal was the least of his Union contributions 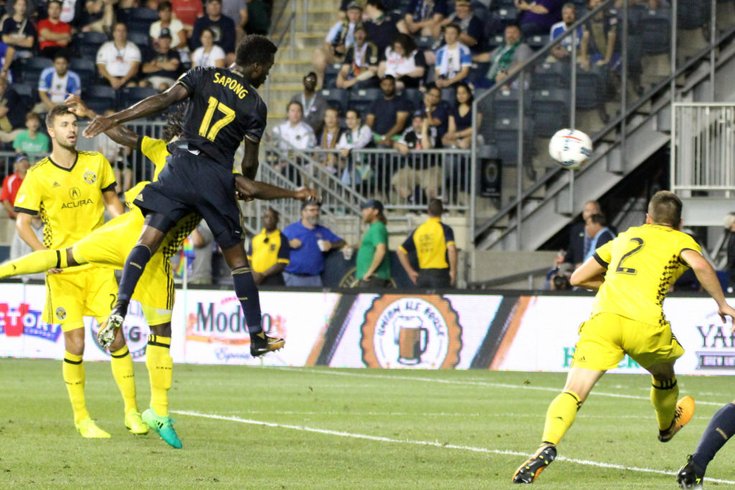 C.J. Sapong's 66th minute strike in the 3-0 Columbus win put him on double digit goals for the first time in his seven-year professional career.

On a night when C.J. Sapong hit double-digit goals for the first time in his seven-year MLS career, it was probably his contribution in other areas that propelled the Union to a 3-0 home win against Columbus.

Sapong, for what it's worth, has never made much of the statistic that we, the media, talk about so frequently. He's spoken in generic terms about helping his team win games, battling with defenders in the hold-up game, and prioritizing results versus individual bench marks.

After Wednesday night's win, a little bit of warranted satisfaction crept into his postgame comments.

"It’s interesting because I think, in the moment, it meant more for me than I would have thought," Sapong said. "It is always good to break any barriers. Again, it’s still just a stat. I want to continue helping my team and this next half of the season, continue to keep performing and producing, help us get into the playoffs."

His 66th-minute goal was the lesser of contributions, with assists provided on the other two Union goals and a drawn foul leading to a red card for Crew defender Jonathan Mensah.

That 35th-minute ejection gave the Union a man advantage for the rest of the night, and Philadelphia punished their guests with a season-high 27 shot attempts in a rather pedestrian victory.

The situation that took place after the sending off was a little less smooth, with Roland Alberg picking up the ball and insisting on taking the resulting penalty. A visibly irritated Sapong eventually deferred to his teammate after captain Alejandro Bedoya became involved.

"Obviously we are both guys that when it comes down to the root form, everyone wants to help the team and I was confident," Sapong said of the argument. "I felt it. I wanted to take it. (Roland) was confident, he felt like he wanted to take it. That is where Ale came in and was like ‘hey, he has the ball, he feels confident, let him take it.’ At that point, you have to just let it work itself out. Thankfully we ended up getting the three points anyway."

In fairness, Sapong did convert two penalties earlier this season that he did not "earn." One was an in-box handball from a Chris Pontius cross, which the winger allowed Sapong to take to complete his hat trick in the 3-0 Red Bull win.

The other was in the Colorado game when a scramble between Kortne Ford and Jay Simpson resulted in another penalty that Sapong finished.

And in Wednesday night's win, it was an Alberg through-ball that sprung Sapong into the final third in the first place, a key part of the sequence that people are casually forgetting to mention. Both players had a role in the build-up to the red card, so you could probably say that they each had a legitimate claim to the spot kick.

It's the optics of the play that look bad, with Alberg coming off as greedy, magnified by the situation that played out in Kansas City two weeks ago when he similarly took a penalty away from Sapong. Wednesday, this was a case of a seemingly selfish player taking the ball from, arguably, the team's least selfish player, which is why the situation looked worse than it really was.

If it means anything to you, Alberg and Sapong did discuss the incident after the game.

"Obviously we can go back and forth about who is right, who is wrong," Sapong said. "If he makes it then he is right, if he misses it, it can go any which way. At the end of the day, he is my teammate and we both have the same goal, which is to help the team win."

Another thing that became lost in Wednesday night's drama is the fact that Sapong's pair of assists ties his career high (5), a number he hasn't matched since his 2011 rookie year. He's also now earned three penalties this season and still has three months to build on those individual marks.

If he continues at even half of the pace he's currently on, he'll shatter personal records in almost every category. 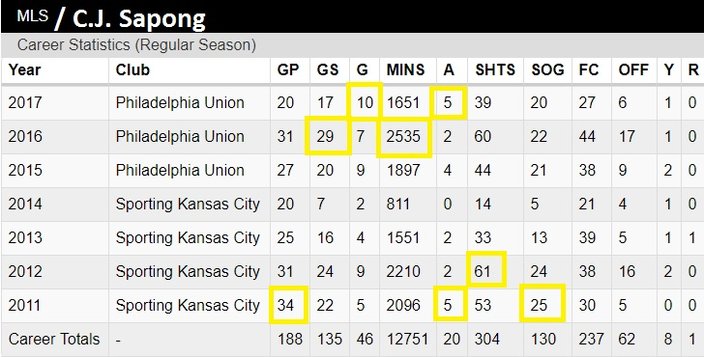 As for criticism of Sapong, it was never about judging his worth as a player, it was about holding a solid pro to a higher standard and wondering when or if that breakout year was going to come.


He's always been a selfless and tireless target man who does a lot of little things that you won't find on a score sheet. He draws fouls and provides link play while getting little love from referees. That part of his game has been well-established and is understood by fans and media who pay attention to nuance.

It's also worth noting that he does what he does on a team that has historically hovered around the middle and bottom portions of the combined MLS table.

And while his main responsibility in this system might be hold-up duties and not necessarily goal-scoring, most of us looked at C.J. as a guy who could do all of the little things while still scoring double-digit goals and becoming a national team caliber and/or elite MLS forward. There's no reason why Sapong can't be on the same level as a Fanendo Adi, or a Cubo Torres, or even a Jozy Altidore. The traits are there and they've always been there, he's just always hit this mid-summer drought that seems to limit his overall form.

The irony shouldn't be lost on anyone, that when Sapong reached double-digit goals for the first time in his career, he did more for his teammates in drawing fouls and dishing out assists.

The individual accolades are a bonus for someone who quietly makes the people around him better.