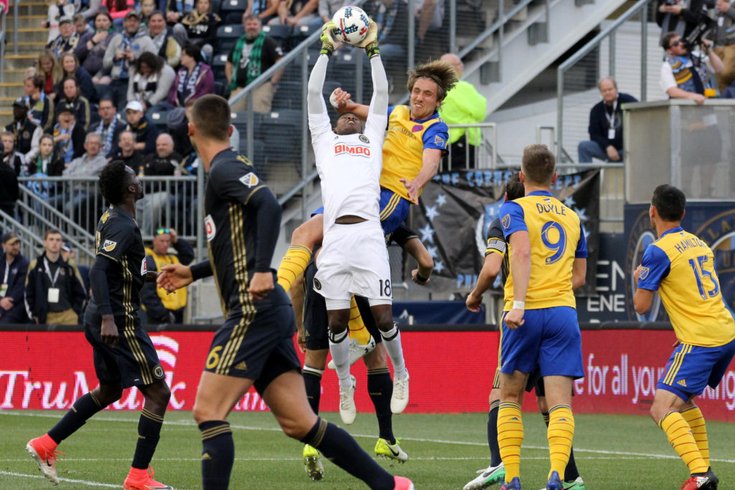 A Philadelphia Union player will lift the Gold Cup on Wednesday night.

It might be Chris Pontius, a late addition to the U.S. roster who started one group stage game and appeared twice off the bench to close out wins.

Or it could be Andre Blake, who has captained Jamaica into the tournament final on the strength of three clean sheets.

Assuming the majority of Union fans are cheering for their national side, the beloved Blake will be the biggest obstacle standing between the USMNT and continental bragging rights.

He's been stellar in the tournament, conceding just two goals in five games for an organized and MLS-heavy Reggae Boyz side that plays a scrappy team game.

"It's been great to watch," said Union head coach Jim Curtin. "I think the whole Jamaica team has shown a lot of heart, the commitment to run and defend. And when you have a goalkeeper back there that – you can tell their whole group knows – they can take risks defensively, whether it's on crosses and attacking them or putting bodies on guys in the box. They know Andre is behind them."

Blake is only 25 years old and doesn't have as many caps as some of his Jamaica teammates, but that didn't seem to influence head coach Theodore Whitmore's decision to hand him the armband.

"Andre is a quiet kid," Curtin said. "He's always been kind of reserved and shy. But to see that he's wearing the captain's armband and calling the whole group in after they beat Mexico – basically in Mexico in a road game at the Rose Bowl – to call that whole group in, you could see he was the one who was doing a lot of the talking. That's impressive."

Ideally, the best case scenario for Union fans is a 1-0 United States win featuring as many Blake saves as we can fit into one highlight reel. The U.S. lifts the cup while Andre's market value rises, opening the door to a potential transfer right now or six months down the road.

It already came close to happening.

Blake was nearly transferred in 2015 before the start of his sophomore MLS season. That was pre-Earnie Stewart when Nick Sakiewicz was still involved in player-personnel decisions and a European deal fell apart at the last minute.

Stewart told Union media at the start of 2017 that he's received no phone calls regarding Blake, which Curtin reiterated Tuesday. I still find that hard to believe, based on what we know from the situation that took place just two years prior.

Blake's contract situation is a bit muddy, but my understanding is that he signed a 3+1+1 Generation Adidas deal, which means that next year would be his last in Philadelphia, assuming his second option year is picked up. I'm fairly sure the final year in a five-year GA contract is a team option and not a player option.

"You always listen," Curtin said of potential offers. "As the head coach you want Andre Blake in goal for you, that's obvious. At the same time, if a call came in, and I can tell you that they haven't yet, but if he continues to have these types of performances I imagine that would be the direction it moves. He should be a goalkeeper, I believe, that teams in Europe are calling for. He's that talented. I can't see, and I'm not an expert on the position, but you can only be so talented as a striker, or a right back, a sprinter, a basketball player, or whatever it is. I don't see much better than Andre. Can he still improve and grow? Yea. In goalkeeping years he's still very young. I think he'll play in Europe. And it's one thing to play in Europe, but it's another thing to play there for a top club. I think he has the ability to play at a top club in Europe, for sure."

Doesnt make much sense to me how Andre Blake got a hand to this. #JAM #JAMvCAN pic.twitter.com/rm6iydgLxs

For those that don't agree with a Blake sale, there are really two things to consider:

I still feel like upgrading the front four makes more sense than committing to a goalkeeper who is inevitably Europe-bound. Even if MLS takes a good chunk out of a four or five million dollar transfer, you still have enough money (two to three million) to use on attacking reinforcements.

Likewise, the one position that we do produce domestically is goalkeeping, where serviceable backups and affordable starters are much easier to find than, for instance, a seven-figure, game-changing number ten.

I don't know if John McCarthy is "the guy" going forward, but he's been solid in these last three games, ripping off a few Blake-style saves of his own.

And judgments on McCarthy, my opinion strictly, seem like they're influenced by the fact that he's backing up an elite starter. Of course, he's not Andre Blake, but most people aren't. There's going to be a drop off, no matter who you are.

"As disappointed as we are as a club, and myself as a coach, in these last two games, the one thing we really learned with some lackluster performances is that John McCarthy has raised the bar, across the board, in terms of where we view him," Curtin said. "He's been excellent. He's shown now that he can start in this league. He makes you feel comfortable now and he's done a great job.

"That's one thing that maybe gets lost in the amazing performances of Andre Blake and the lackluster performances from (the rest of) us. You have Kansas City, a half against Swansea, then Columbus and Montreal. We're still a team that's done well defensively and John is a part of that. Andre is a big part of that. In a tough time when we lost two games on the road, Johnny was one of the positives, for sure."