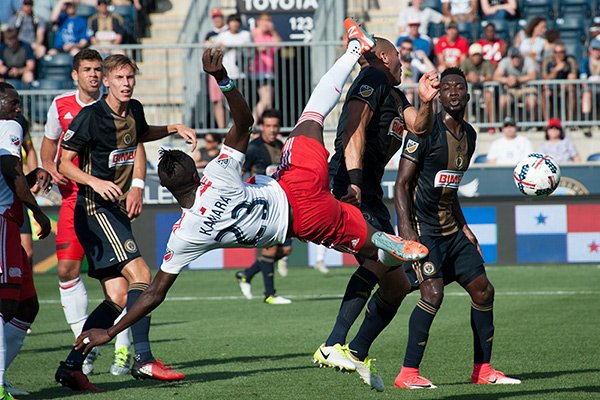 For the second time this month, New England's Kei Kamara almost caught a Union player with a high boot to the face.

Even at the tail-end of a four game, eleven-day stretch, most people probably expected more from the Philadelphia Union on Saturday night.

Instead, the team again looked bland on the road, sniffing out a few scoring chances but never really threatening the New England Revolution in a 3-0 loss.

The result pulled the Revs level with Philadelphia on 26 points, dropping the Union to tenth place in the Eastern Conference in the points per game column.

Here are ten observations from the loss:

It surely would have resulted in an injury and/or red card, with the studs showing near an opponent's face.

No contact occurred, so the whistle didn't blow, the laws of the game state that you actually can whistle for dangerous play even when exposed studs or high boots don't connect with an opposing player.

Here's a pic from USA Today Images of the first Kei Kamara goal. Should it have been waived off for a high boot? pic.twitter.com/F5kITJxyHI

2. Roland Alberg had another mundane shift

There's still no production from the number ten position, no matter who plays there.

In a 60-minute shift, Alberg finished with one blocked shot and one key pass while going 1/1 in dribbles and drawing just one foul. He was also whistled for a handball while trying to earn a free kick in the attacking area, which the referee determined was simulation. 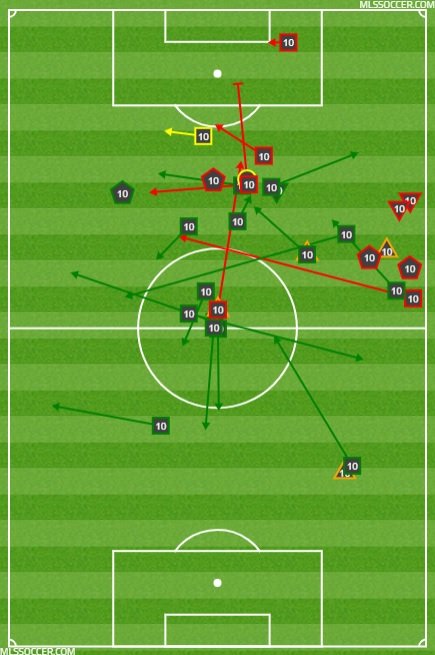 I think assistant coach B.J. Callaghan did a nice job with developing dead ball plays last season and really fleshing out a phase of the game that had been lacking in previous campaigns.

This year, I don't know how much you really need to bother, since you've got a guy in Haris Medunjanin who serves one of the best balls I've seen in eight seasons of Union soccer.

They tried this play on Saturday night, playing short for Alberg, who squared for Giliano Wijnaldum, who went back post for an Oguchi Onyewu knock down.

They tried another routine in the 82nd minute where Medunjanin, for whatever reason, played short for Ray Gaddis, who didn't even get a cross off.

4. The surface was not great, but both teams had to play on it

The turf field at Gillette Stadium was covered with natural grass for Sunday's international friendly between Juventus and Roma.

I thought it might give the Union an advantage, since the Revs' home field was covered in a different and unusual surface, but it didn't seem to make a huge difference.

Here's what head coach Jim Curtin said about the field after the game:

“Yeah, the turf is a factor; it's usually something that would probably favor them because they are used to it. The grass held up okay, I guess you could say there were some seams out there and there were some crazy bounces, and some of it was tearing up in some spots, but you know overall we just didn’t do enough with the ball."

5. Curtin isn't wrong when he talks about Jack Elliott and the Rookie of the Year award

I wrote a few weeks back about Jack Elliott's quietly successful rookie season.

He was one of the few players on Saturday night who had a decent game, highlighted by a last ditch clearance to keep the score at 1-0.

Honestly, though, Diego Fagundez should have just tapped this ball into the back of the net: 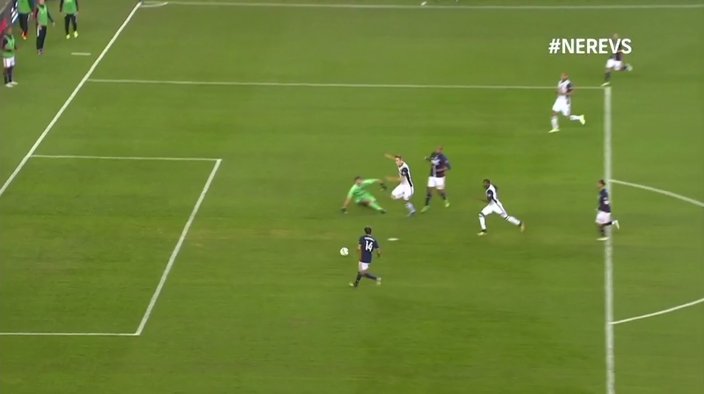 Last year's leading goal scorer has gone five months without a goal in 2017, which is something that doesn't come up often enough when we talk about lackluster individual performances on this team.

He's still doing his job in the two-way defensive game, but now that the assists that stopped coming, you wonder what else he's really contributing out there.

Rowe is a natural midfielder who had himself a nice Gold Cup.

Recently, he's been playing left back for the Revs, and he's looked pretty good doing it.

This is his passing chart from Saturday night, which shows an assist on the game-winning goal and a pair of key passes from rather deep starting points: 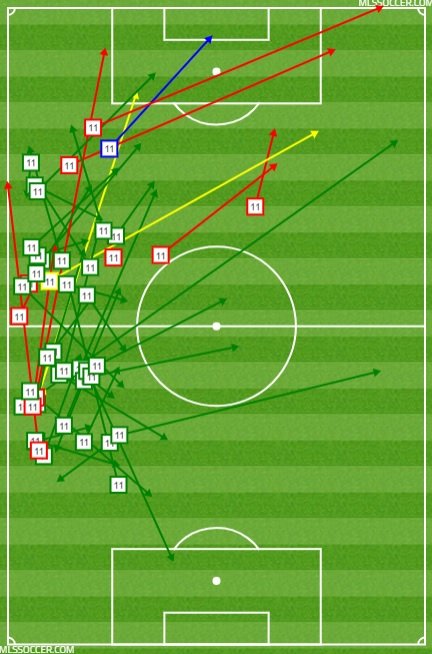 8. The left side of the defense is having some issues

Wijnaldum looked pretty good when he took the starting left back job awhile back, but he's been a little shaky defensively in recent weeks.

Likewise, Onyewu has had a few moments of "switching off" that we really didn't see earlier in the year.

On the second Revs' goal, watch as Gooch loses track of Kamara ghosting behind him:

.@KeiKamara's first goal on Saturday night was WAY up; This one was down low, courtesy of a @2fast2farrell cross. #NERevs pic.twitter.com/zIz20kaoj6

In that situation, you'd normally see Onyewu take a look over his shoulder and adjust appropriately. For whatever reason, that didn't happen here, and it didn't happen in Montreal in a similar situation as well. Onyewu was excellent in positioning earlier this year, but he's missed a couple of marks in the last few games.

One win in 11 road games won't get you into the playoffs.

The Union have taken just six out of 33 possible road points this season.

10. ...but was definitely a tough stretch

It needs to be reiterated that this team just played a pair of Wednesday/Saturday games with three of four taking place away from home.

The Union played those games without their best player, Andre Blake, who is now in jeopardy of missing Saturday's home game unless that stitched-up hand heals appropriately.

You aren't going to find much success with road trips on short rest, but they really needed these points against beatable teams.