With two-thirds of the season gone, Union's Chris Pontius has yet to score 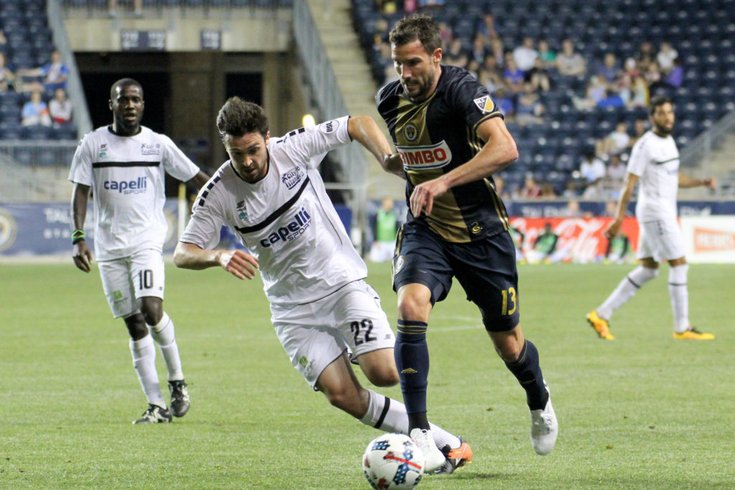 Chris Pontius led the Union with a career-high 12 goals in 2016.

We're 22 games into the Philadelphia Union season and Chris Pontius hasn't found the back of the net.

It's a slump approaching the level of 2011 Sebastien Le Toux or 2015 Andrew Wenger, when the ex-Union wingers went scoreless from the run of play over the course of 25 and 19 games, respectively.

Pontius has played 19 times this year, only missing three recent matches due to his Gold Cup call.

What happened to the player who scored a team-high 12 goals last season?

"It's something that we're asking ourselves," said Union head coach Jim Curtin. "We're looking at different things. How can we do a better job of putting him in spots to get to the endline more and get in behind? Last year he had a knack for showing up on the back post for crosses and everything he touched was going in. This year, while he has gotten some assists, the goal hasn't come yet."

Pontius showed off veteran savvy on the way to his double-digit output last season. Nobody in MLS was better at timing that late run or identifying space to attack in the final third.

Last year, the winger gobbled up these kinds of opportunities:

For whatever reason, it's not happening this year.

Pontius has only taken 29 shots this season, which is on pace to fall short of the 66 he managed last year.

Of those 29 shots, only eight have found the target, which really tells the story.

In 2016, Pontius finished with a career-high 35 shots on goal, putting a whopping 53 percent of his efforts on frame. Only twice in his career, in 2011 and 2013, did Pontius crest 40 percent in that on-target category.

If you extrapolate those numbers, he's on-pace for a 50 percent drop in this department. 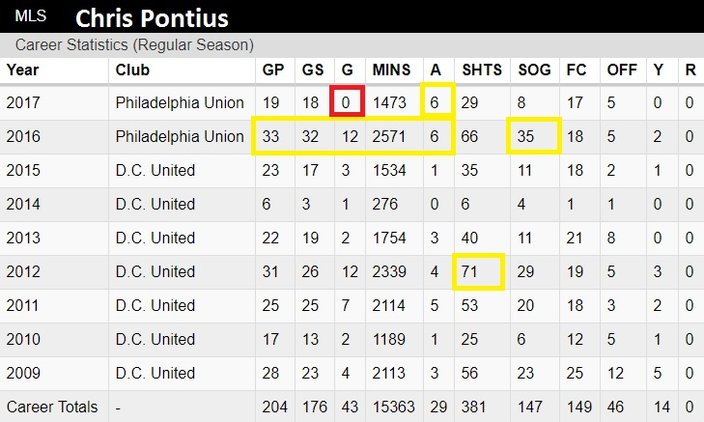 You could certainly say that the departure of Tranquillo Barnetta and the Union's backward slide in the high pressing department could be affecting Pontius' game. Philadelphia has had very little chance creation coming from the #10 position this year, with a rotating cast of Alejandro Bedoya, Roland Alberg, and Ilsinho.

One of the reasons we don't talk about the scoring drought as much as we should is because Pontius was contributing in other areas to start the season. He conjured up six assists in the first 11 games, matching his total from 2016 in about one-third of the time. His two-way effort and commitment to defense was always there, and he racked up defensive actions as the Union compiled four straight shutouts.

"He's a guy who is going to be honest and work incredibly hard," Curtin said. "He's done a good job in certain aspects of helping the team. He's a pro that needs that first one to go in and we're confident he can break out of the goal scoring slump that he's in. Usually, when guys go with the national team they come back with some confidence. We've seen that in training."

According to Whoscored.com, Pontius is second on the team in key passes per game. His 1.2 mark is behind only Haris Medunjanin, who leads the pack with a 2.5.

Pontius is putting in 1.5 shots per game and he's not losing the ball in possession, but his dribble rate of 0.6 places him 12th on the team, behind a couple of midfielders and defenders. He's not been able to run at defenders in space this season, which means that he hasn't been able to generate much in 1v1 situations.

One area he does excel at is winning aerial duels. His 3.7 aerials won per game is second in the entire league, behind only D.C. United center back Steve Birnbaum. In fact, half of Pontius' assists have come from back-post headed knockdowns into traffic. 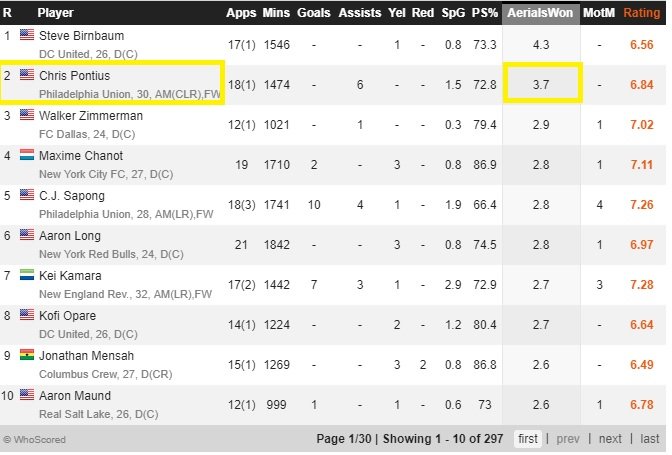 The Union aren't out of it yet, but they're fading quickly, and they need more from last year's leading goal scorer if they're going to make any kind of realistic playoff push.

"Again, when we talk about the last 12 games, we're going to need our key guys to really raise their level and step up in some big spots," Curtin said. "Chris would be one of those guys that I think obviously needs to have some production down the stretch in terms of goals. It's just getting that first one and continuing to run hard in the box, and when he does get his opportunities, being clinical."