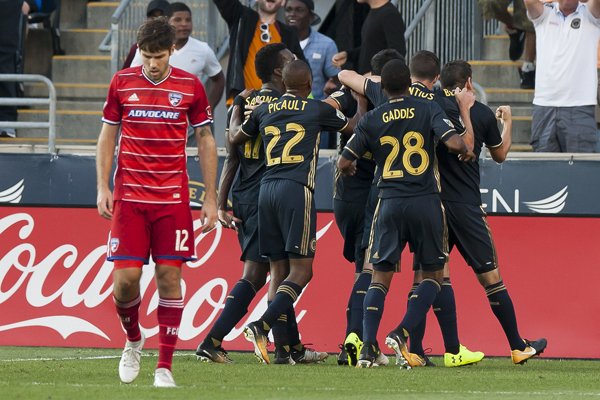 As frustrating as the Philadelphia Union have been this season, one thing always seems to be true:

If you don't bring your A-game to Talen Energy Stadium, you're going to get slapped around.

We saw it Saturday night in a 3-1 win against FC Dallas. We saw it last month with 3-0 wins against Columbus and New England. We've seen it every single year since the stadium was built.

It seems like there's always a mid-summer scenario where a team comes to Chester missing a few starters, or doesn't take the matchup seriously, and winds up getting run out of the building.

The Union's seventh home win was a big one, reviving thoughts of a playoff repeat and keeping alive the 2017 season.

Here are ten thoughts on the game.

1. We finally saw some end product from Ilsinho

It didn't take long for the Brazilian midfielder to establish himself as the most skilled player in Philadelphia Union history. No one on any previous roster came close to matching the dribbling and ball-control abilities that we first saw in the 2016 preseason.

The issue was that those flashy moves just weren't impacting the score sheet. A fancy dribble would result in a turnover about two seconds later. Sequence completion was a fleeting concept whenever Ilsinho was involved in a play.

Saturday night, we saw what happens when he's dialed in and focused on finishing a play. The first goal was a Union all-timer. The second was a clinical, first-time finish. And the third was an unselfish display to set up a teammate.

It was, by far, his best performance in a Union shirt.

The run from Ilsinho, his give-and-go with Haris, and CJ with the finish. Not many prettier goals than this onehttps://t.co/51cJW1te2i

2. Haris Medunjanin gets it

On the build-up to that opening goal, Haris Medunjanin could have easily tried a right-footed shot from close range, but he didn't.

He instead squared for C.J. Sapong, then offered this post-game quote:

"It was a great goal. And when you see somebody free, you pass the ball. I think it's much easier for C.J. to score the goal, than me, from there. When C.J. scores we win, and everybody wins. That's how I see it. Sometimes you have to put your ego away in these kinds of situations."

I read a lot of comments about C.J. Sapong scoring easy goals from short range. People also point out that he's converted three penalties en route to breaking double-digits for the first time in his career. The thought is that he's a tap-in artist and can't really score his own goals or create his own shots.

That's fine, and might be true, but it doesn't really matter, because he's a physical center forward who spends most of the game tangling with center backs and putting his teammates in better positions to get on the score sheet.

I think he deserves those easy finishes as a reward for all of the hard work he does in the two-way game, holding the ball and earning fouls and getting brutalized every week.

I also think that "right place, right time" is a skill in itself, just like finishing from distance or hitting free kicks or running at defenders. Sapong is not in a position to score Saturday night's brace without recognizing where to be and working to get there.

The history of world soccer features a ton of poachers who played for high-level teams. I don't remember a lot of complaints about Ruud van Nistelrooy scoring from four yards out, or Filippo Inzaghi cleaning up trash inside the box. Jack McInerney did a lot of good things in Philadelphia, but also poached his share of back-post goals as well.

At this point, it shouldn't matter how they go in.

4. Chris Pontius still can't get off the mark

Chris Pontius quietly did some good things in this game, providing the typical defensive structure that he always does while drawing four fouls and keeping the ball alive in the build-up to the opener.

He still has zero goals this season, and he got behind the defense in first-half stoppage time only to hit a chest-high shot at Chris Seitz from the top of the penalty area.

For all the talk about video replay, it's hard to have any complaints about the scenario that unfolded on Saturday night.

With a clear foul committed on John McCarthy, the replay ref correctly called for a review and reversed the goal. The entire stoppage in play was less than two minutes, and that ended up being a moot point anyway, since there's a natural break that takes place after a goal.

And even if Dallas didn't score, we would have paused for trainers to come out and take a look at McCarthy following the collision.

Most of the post-game comments were positive regarding VAR, which is obvious since the call benefited the Union. The only less-than-enthused approach came from Medunjanin, who said that referee Ricardo Salazar shouldn't have required replay to see his goalkeeper get kicked in the groin.

John McCarthy on VAR: "I would've been pissed. He kicked the crap out of me"

6. Every other result favored the Union

All of that resulted in the Union pulling within three points of the playoff line with a winnable home game against Montreal next weekend. Jim Curtin's team could be in prime position to salvage their season if they can sneak into sixth or seventh place before hitting the back-end of an incredibly difficult schedule that features multiple games against teams in the top half of the Eastern Conference. 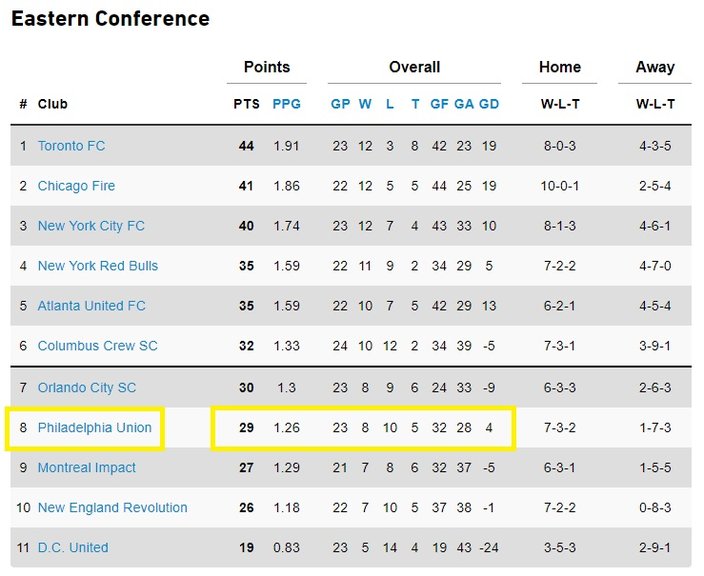 7. The Union, for some reason, are good against the West

In 2016, this team really struggled against a superior Western Conference.

This year, the East is clearly better for the first time in a long time, and the Union are playing their role in that shift of power.

Philadelphia is 3-2-3 against the West this season, with a pair of road shut outs and a draw in Kansas City.

That victory removed, they've claimed just three out of 30 possible points away from home. It's a big reason why they're on the wrong side of the red line as we hit the home stretch.

These are the remaining road games:

Where are the points coming from?

9. The apathy is still there

On "Sons of Ben Appreciation Night," the River End was only about 70% full.

That's been a typical sight for some time now, with fan apathy building over the course of four or five mediocre seasons.

I've talked to a lot of long-time season ticket holders and SOBs who say they just don't feel the same buzz that they used to feel back in 2010 or 2011. Part of that, I'm sure, is due to novelty wearing off, but it's also because the team isn't great.

I felt a bit more energy when the Union went up 2-0 in this game, but it was very quiet to start the second half, almost as if people were expecting the collapse to come. They had seen it before, and you get the sense that there's a hesitation to jump back on the bandwagon because this fan base has been burned before.

This time, however, the team clamped down and shut the door on the visitors. 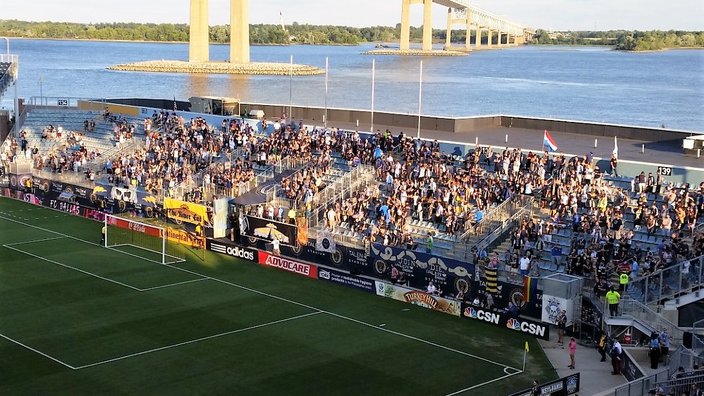 10. Both teams stuck around for the Special Olympics

Locker room availability was sparse on Saturday, for good reason.

Both teams, including coaches, executives, and front office employees, went back out to the field to watch a Special Olympics matchup between members of the Philadelphia and Dallas communities.

Players and coaches from both teams sticking around for a @SpecialOlympics double header pic.twitter.com/d5VnJH9Chm