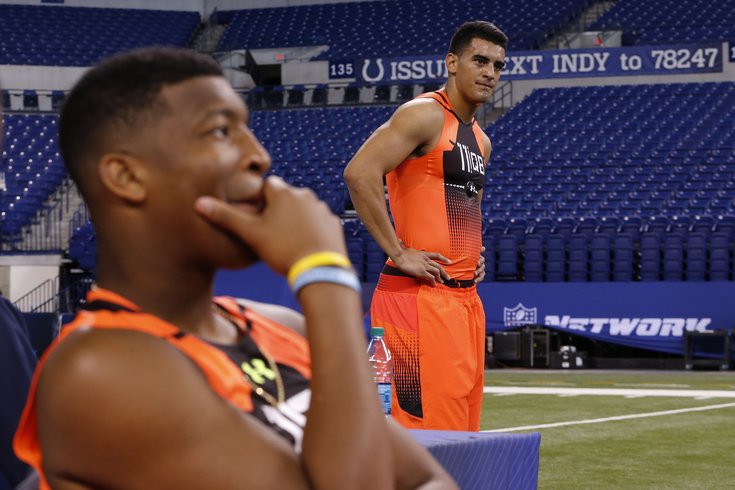 A reporter went back in time to the 2015 NFL Combine and asked Marcus Mariota and Jameis Winston if future Jared Goff and Carson Wentz are better prospects.

Ever since the beginning of "NFL draft season" has begun, the "top three quarterbacks" in the 2016 NFL Draft have fluctuated between North Dakota State's Carson Wentz, Cal's Jared Goff, and Memphis' Paxton Lynch. As more information has leaked out, it would appear that the NFL values Wentz and Goff over Lynch.

All along, however, the perception has been that none of the quarterbacks in this draft are on the same level as the two quarterbacks that were selected with the No. 1 and No. 2 overall picks a year ago, Jameis Winston and Marcus Mariota. Recently, a number of draft analysts are beginning to say the Wentz and Goff might actually be better.

For example, during Goff's pro day at Cal, NFL Network's Mike Mayock said that he thinks Wentz and Goff are better prospects, via Dan Parr of NFL.com (video here):

"The statement I'm going to make to you guys, and you can tell me whether you agree or not, is I'm at the point now with both Wentz and Goff where I think they're every bit as good, if not better, than Winston and Mariota from a year ago as prospects," Mayock said.

Greg Cosell of NFL Films isn't quite as high on Goff, but he thinks Wentz has better traits than Winston or Mariota, via the Eagles' website.

"If I had to compare this year's group, I think Wentz is more talented than either Jameis Winston or Marcus Mariota just in terms of traits. I think Carson Wentz is a high-level traits prospect," Cosell said.

Earlier in the draft process, an anonymous draft expert had Goff rated more highly than Mariota and Winston, via ESPN's Tony Grossi.

"During Super Bowl week, one draft expert I spoke with said he ranked California’s Jared Goff as a better prospect at this point in the process than Mariota or Tampa Bay’s Jameis Winston a year ago. That draft guru also said that North Dakota State’s Carson Wentz clearly was ahead of the rest of the quarterbacks and the gap between Goff and Wentz was not that great."

I'm not exactly sure why a "draft expert" who is presumably not even affiliated with a team wouldn't just go on the record with that statement, so take that for what it's worth.

Seemingly every year, everyone loves them some quarterbacks two weeks prior to the draft. Time will tell.