Would the Eagles trade up to pick No. 8 just to trade right back down? 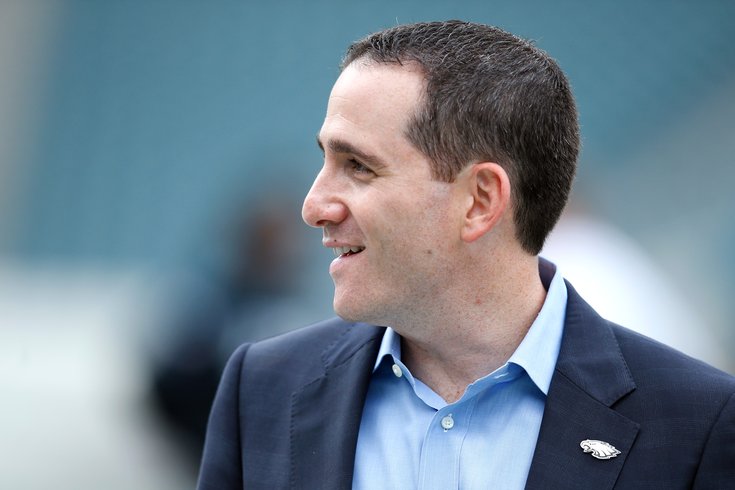 Beep, bop, boop, bop, beep bop boop. Ring, ring... "Hello Jason? Can you publish some nonsense about us not having interest in a quarterback because we're already paying decent money to Bradford and Daniel? There's a juicy future scoop in it for you if you do. Awesome, thanks."

On Friday, an interesting (or perhaps better stated, odd) report emerged from Jason La Canfora of CBS Sports, saying the Eagles' interest in quarterbacks is all for show, and they're more likely to trade back than trade up.

The more I hear about the Eagles and quarterbacks -- Carson Wentz is the flavor du jour today -- the more I continue to believe they will be looking to trade down, pick up draft picks, and address other positions in the draft. I'm not buying any of this, and I continue to hear from shrewd execs on other teams that they believe this is all for show from Philly as well.

Here is some food for thought -- from the start of the 2015 league year until the start of the 2016 league year -- the Eagles spent $201 million on payroll in real dollars, way more than any other team in the NFL (Miami was next at $187 million, according to NFL management council figures). That includes their big splurge on QB Sam Bradford and re-signing Vinny Curry and Zach Ertz and all of those guys, and it doesn't even include the big bucks they gave backup QB Chase Daniel.

Owners don't do that to then go out, in a year in which they are clearly in win-now mode in a watered-down NFC East, and then go spend another $25 million on a quarterback in the draft when they still have many other needs.

To begin, QUARTERBACK IS A NEED! But beyond that, the "follow the money" logic makes no sense.

Sam Bradford is with the Eagles on a two-year deal, which is really more like a one-year deal seeing as it essentially has no guarantees in year two. Meanwhile, Chase Daniel is paid well... for a backup. And that's what he is -- a backup. The common thinking is that Wentz will need a year to get up to speed in the NFL before you throw him to the wolves. Therefore, the idea that the Eagles have a lot of money wrapped up in their quarterbacks may be true to a degree, but it would only be for one year, and would make sense for the Eagles' situation.

Dismissing the idea of the Eagles trading up for Wentz would be completely dismissing the idea that the Eagles have an eye toward a long-term answer at the most important position in sports. The short-term money paid to three quarterbacks on the roster is irrelevant if you think you've just drafted the future face of your franchise.

Furthermore, the deals the Eagles completed with Curry, Ertz, Lane Johnson, Malcolm Jenkins, and Brent Celek were done because the Eagles feel that they are core members of the franchise who they could lock up at bargain dollars before they hit the free agent market. Those deals have absolutely nothing to do whatsoever with the Eagles' draft strategy.

The source of the La Canfora's commentary most certainly isn't coming from "shrewd execs on other teams." If anything, it's coming from a media-shrewd exec with the Eagles who is trying to create confusion.

Could the Eagles trade back? Eh, maybe if they were blown away by an offer. But it won't be because they signed guys like Bradford, Curry, and Ertz to contract extensions.