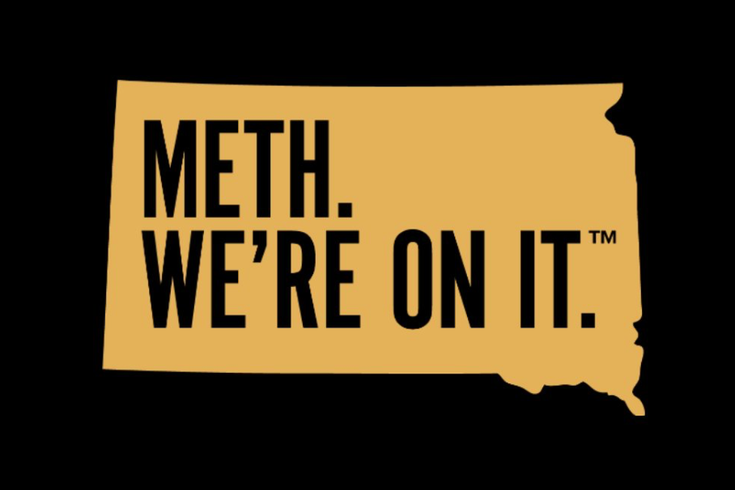 The South Dakota Department of Social Services paid nearly $450,000 for an ad campaign to target the state's methamphetamine epidemic. The Minneapolis firm they paid to do the job came up with a campaign that garnered immediate reactions — mostly negative or humorous.

An effort to combat South Dakota's epidemic of methamphetamine addiction went awry on Monday following the rollout of an oddly-framed ad campaign.

Gov. Kristi Noem helped launched the new anti-meth program with a flourish: "Meth. We're On It."

The state of South Dakota spent $500k on an ad campaign to let everyone know we’re on meth pic.twitter.com/TjAycDtjut

South Dakota taxpayers paid $450k for a new anti-meth PSA campaign. And here's what the state came up with https://t.co/1MATJPBULv pic.twitter.com/bsZKkXCPNL

At the bottom of one of the state's posters, there's a call to action that makes at least some sense of the language that was used.

"There's a problem in South Dakota and we all need to get on it," the poster reads. "Because together we can get meth out of here."

By "get on it," the campaign evidently means "get on" addressing the problem. Sometimes being concise is not the way to go.

The state is dealing with high incarceration rates tied to meth dealing and distribution, overcrowded rehab facilities and an alarming rate of methamphetamine use among teenagers.

"It's evident there's a need for an aggressive approach to reduce use of the devastating drug," South Dakota Social Services director Laurie Gill said in a statement, according to The Argus Leader. "This is a movement to educate South Dakotans on the signs of addiction, the treatment resources that are available and how to implement prevention techniques in their homes and among their communities."

The general reaction to the ad campaign would suggest it's not as effective as Gill wants to believe, unless total volume of ridicule and mentions is all they were really using to define success. (It should be noted, however, that Philadelphia Flyers mascot Gritty was greeted with scorn for about 24 hours before he was universally embraced and became a sensation).

For significantly less than the $449,000 South Dakota spent on their new "anti-meth" campaign, I would have gladly helped them come up with something significantly less "pro-meth" sounding than, "Meth. We're on it." https://t.co/XlTV7wnFLC

The sequel to South Dakota's "Meth. We're On It." campaign: pic.twitter.com/66Bbaf1T61

You have to wonder what they rejected if "Meth: We're On It" was the best choice. #Meth #SouthDakota #JustDoIt

Sadly, the first thing I thought when I saw South Dakota's $450K ad campaign telling us all they're on meth was:

‘Meth: It’s what’s for dinner’
‘Meth: Just do it’
‘Meth: Have it your way’
‘Visit South Dakota, Visit Meth’
‘Meth, It’s not for everyone’
‘Have some meth and a smile’ https://t.co/MYSKHJYUVU

While the counterintuitive approach to South Dakota's problem is unusual, the state's new website outlines various initiatives and provides information on how residents can be a part of the solution.

It may just be that as we come up on 2020, we've finally reached the point where thinking collectively like marketers should leave us surprised by nothing anymore. The idea is to reach critical mass and worry about the finer points of messaging once the issue has entered the mainstream, through the backdoor if need be.