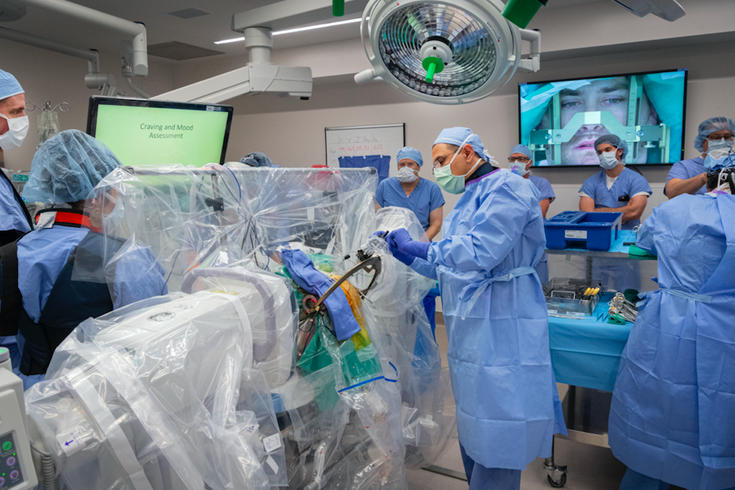 West Virginia University researchers are exploring whether deep brain stimulation can help patients with opioid use disorder who haven't responded to other types of treatment.

The clinical trial – the first of its kind in the United States – comes as opioid addiction remains a major health crisis throughout the U.S.

About 130 Americans die each day from an opioid overdose, according to the U.S. Centers for Disease Control and Prevention. In 2017, about 19.7 million American adults had a substance use disorder, the National Survey on Drug Use and Health reported.

Unfortunately, current treatment plans are not always effective. But the trial, led by Dr. Ali Rezai, executive chair of the WVU Rockefeller Neuroscience Institute and funded by the National Institute on Drug Abuse, offers some hope.

Rezai and his research team have implanted a Medtronic DBS device in the trial's first participant, a 33-year-old man with a history of opioid and benzodiazepine use.

The DBS device, similar to a cardiac pacemaker, uses tiny electrodes to regulate certain areas of the brain. It is inserted into the brain's reward centers.

The U.S. Food and Drug Administration already has approved it for the treatment of Parkinson's disease, essential tremor dystonia, epilepsy, and obsessive-compulsive disorder. But Rezai believes it may help people battling addiction, too.

"Our team at the [Rockefeller Neuroscience Institute] is working hard to find solutions to help those affected by addiction," Dr. Rezai said in a press release. "Addiction is a brain disease involving the reward centers in the brain, and we need to explore new technology, such as the use of DBS to help those severely impacted by opioid use disorder."

This first phase of the clinical trial includes four participants with opioid use disorder. All of them have tried and failed the standard of care for addiction recovery at WVU Medicine.

"Despite our best efforts using current evidence-based treatment modalities, there exist a number of patients who simply don't respond," said Dr. James Berry, interim chair of the WVU Department of Behavioral Medicine and Psychiatry and director of addiction services at the Rockefeller Neuroscience Institute. "Some of these patients remain at very high risk for ongoing catastrophic health problems and even death. DBS could prove to be a valuable tool in our fight to keep people alive and well."

The trend of surgically implanting machines into humans, especially the brain, raises ethical concerns for some in scientific communities.

Rezai told BBC News that this technology is not for consumer use.

"I think it is very good for science and we need more science to advance the field and learn more about the brain," he said. "This is not for augmenting humans and that is very important. This is not consumer technology."

He added, "surgery has inherent risks and is not trivial. It is only for those with chronic disease who have failed all other treatments and are without hope."