Darrell Dawkins, 30, of Bridgeton has been taken into custody and charged with unlawful possession of a handgun, police said 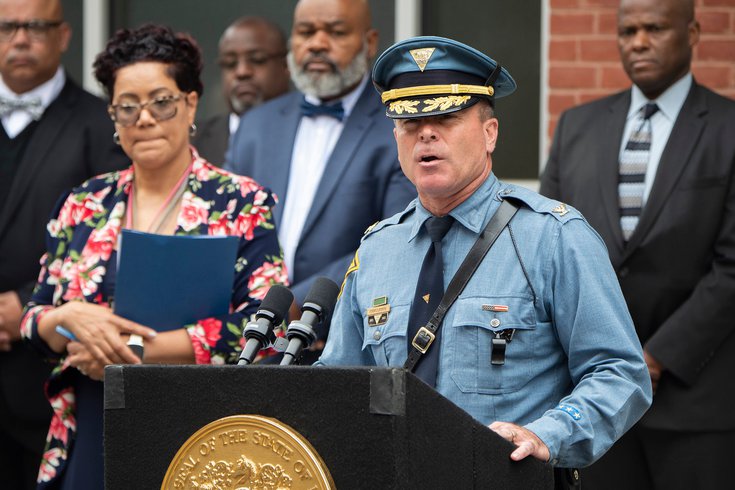 New Jersey State Police Col. Pat Callahan details the investigation into a mass shooting that killed three people and wounded 11 others at a birthday party in Cumberland County.

Update: A second arrest has been made in connection with the mass shooting that took place this past Saturday night at a birthday party in South Jersey.

Darrell Dawkins, 30, of Bridgeton has been taken into custody and charged with unlawful possession of a handgun, the New Jersey State Police said. Dawkins was at the house party in Fairfield Township, Cumberland County when the shooting occurred, but investigators have not identified him as the suspected shooter at the party.

A third victim who was injured in the shooting passed away Monday evening at Cooper University Hospital in Camden, police said. The victim was identified as 19-year-old Braylin Holmes of Millville.

Kevin Dawkins, 36, of Bridgeton, who was apprehended Sunday and faces multiple gun charges, has also been established as having been at the house party when gunfire began.

A Bridgeton man has been charged in connection to a mass shooting that left two people dead and 12 others wounded at a house party Saturday in Cumberland County.

Kevin K. Dawkins, 36, was taken into custody Sunday and charged with four weapons offenses, state and local law enforcement officials said during a press briefing Monday. He is being held in the Cumberland County jail.

More arrests are expected as the investigation plays out, officials said. They described the shooting, which occurred during a birthday party in Fairfield Township, as "a targeted attack."

They identified the two fatalities as Kevin Elliott, 30, and Asia Hester, 25. Both were from Bridgeton.

The names of the 12 people wounded were not released in order to protect their privacy and the early stages of the investigation, police said. They said the victims included men and women, ages 19-35, from Cumberland County.

The victims with minor injuries have been released from area hospitals, but several remain hospitalized in dire condition, officials said.

Several hundred people are believed to have been at the party when gunshots rang out, but most of the attendees had fled by the time law enforcement arrived, officials said.

"A birthday party is supposed to be a joyous event, not a target for those hellbent on inflicting harm on a community," Gov. Phil Murphy said.

A state trooper conducting a motor vehicle stop around 11:30 p.m. heard what was believed to be fireworks or gunshots and was the first to respond to the scene. Other state troopers arrived around 11:50 p.m.

A number of firearms and shell casings were recovered from the scene. The residence, on the 1000 block of East Commerce Street, is located in a wooded area near a cemetery, a church and a school.

Earlier Saturday, police had responded to a noise complaint at another house party in Fairfield. Some of the attendees are believed to have later attended the party where the shooting took place, officials said.

The motive for the shooting remains under investigation. Witness interviews are being conducted, search warrants are being executed, and forensic and digital evidence is being gathered and analyzed, officials said.

"What we saw here in Fairfield is a microcosm of the scale of gun violence we see elsewhere in other communities in our state and across the country," Murphy said. "We are at the point where this kind of horrific scene is almost part of our daily lives. It has become commonplace. If there is one thing we can never normalize, it is senseless gun violence."

"We can and we must continue to tackle this problem head on," Attorney General Gurbir Grewal added. "We must treat it like the public health crisis that it is. We recognize that we must simultaneously address the root causes of violence, while also taking swift action against those who break the law. While we have made important strides in this effort in New Jersey, events like Saturday's shooting remind us how much further we have to go."