New developments from research into trying to squelch the spotted lanternfly population in Pennsylvania has scientists "cautiously optimistic."

Researchers with the Penn State College of Agricultural Sciences are using native two fungi, Batkoa major and Beauveria bassiana, which cause diseases in insects but are harmless to humans, after a Cornell-led study showed that the fungi had decreased the destructive insect's population in forests near Reading.

According to information released Wednesday, in early July scientists began testing four plots of land at Norristown Farm Park, a 695-acre county park in Montgomery County, where dense populations of spotted lanternfly nymphs had been found.

Using hydraulic sprayers that can reach 30 feet into the air, scientists sprayed the tree of heaven — the insect's preferred host — with a commercial biopesticide containing the Beauveria fungus.

After two weeks of spraying, the report said, the number of live lanternflies in areas treated with the fungus were about half of the number in the control areas, which were sprayed with water.

“We are cautiously optimistic,” said David Biddinger, a tree fruit research entomologist. “More needs to be studied, but if this research pans out, it could be a turning point. Time will tell.” 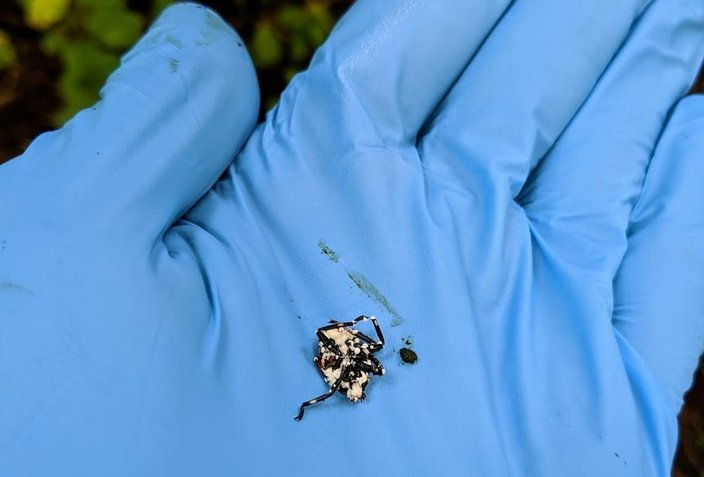 Above is a spotted lanternfly treated with the native fungus Beauveria bassiana during a Penn State-led study into eradicating the invasive pests' population in Pennsylvania. A telltale sign of the fungal infection on an insect is the white fuzz.

The developing research is still being analyzed, however if the results continue to be positive, future projects will focus on the development of several biopesticides that are proven to be effective on the spotted lanternfly population and pose little risk to beneficial native insects, like pollinators.

Since the spotted lanterfly was discovered in Bucks County in 2014, it has spread to 14 counties in southeastern Pennsylvania and been seen in New Jersey, Virginia, Maryland, and Delaware.