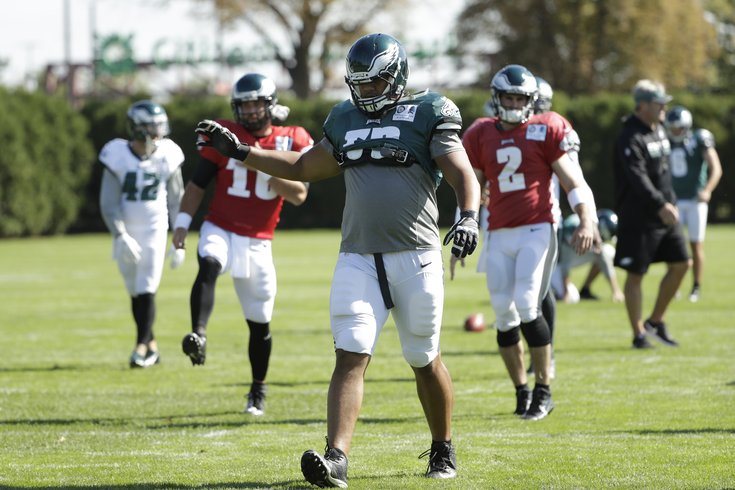 In his introductory press conference as a member of the Philadelphia Eagles back in April, newly signed guard/center Stefen Wisniewski was blunt in stating his expectations for the 2016 season and beyond.

"I wasn't getting the kind of money I was looking for in a long-term deal, so I kind of wanted to sign a one-year deal and get back to being a free agent again," he said when asked why he signed just a one-year deal with the team.

Wisniewski was unhappy with the offer that his former employer, the Jacksonville Jaguars, made him.

"They were kind of low-balling me to be honest," he added.

While Wisniewski was refreshingly honest, stating that he essentially intended use the Eagles for one year just to bolt for the most lucrative contract the following offseason may not have been the smartest idea, especially on a team that realistically didn't have Super Bowl aspirations in 2016.

There's an argument to be made that moving Allen Barbre to right tackle and filling Wisniewski in at left guard would be putting the five best offensive linemen on the team on the field. The Eagles chose to go another direction when they inserted rookie fifth round pick Halapoulivaati Vaitai directly in at right tackle, with the following two-fold explanation from Doug Pederson:

Wisniewski is clearly not happy.

"I was told that 'V' had been practicing really well and they wanted to give him a shot," said Wisniewski after the Eagles' loss to the Washington Redskins on Sunday.

One additional theory that has not been mentioned by Pederson is that playing Vaitai would allow the team to assess whether he can be the right tackle of the future. At some point soon, Jason Peters will no longer be in the NFL, and Lane Johnson will take his place at left tackle. By determining whether or not Vaitai is a good player or not this year, it would allow Howie Roseman and the Eagles' front office to determine if they need to invest significant draft pick and/or free agent capital on the tackle position.

Pederson denied that Roseman was in any way involved in the decision to start Vaitai over Wisniewski.

"This was truly a coach's decision on my part, and Coach Stout and Eugene Chung and Frank Reich, and collectively just taking all the information and making this decision," he said.

In his day-after-game press conference on Monday, Pederson was asked if part of the decision to play Vaitai was to get him real game experience so that he'll be a better player down the road.

"He gives us the best opportunity to win right now," Pederson said. "He is our backup right tackle right now. Therefore, he's going to play and he's going to gain valuable experience week in and week out."

Eh, I'm not sure that what we saw from Vaitai Sunday afternoon should ever inspire someone to say that he gives the team the best chance to win, but OK.

Starting Vaitai does make long-term sense, for the following reasons (as already touched on above):

If indeed that is the Eagles' real reasoning for starting Vaitai and not that he gives the team the best chance to win (lol), the Eagles can't admit it. They can't openly announce to their players that they're starting a lesser player so that they can plan for the following offseason, or so that they can give him experience. That kind of thing doesn't exactly fly with vets.

But it's certainly logical from a front-office perspective. Of course, if Vaitai misses a block and gets Carson Wentz killed, then it may not be such a great long-term idea after all.