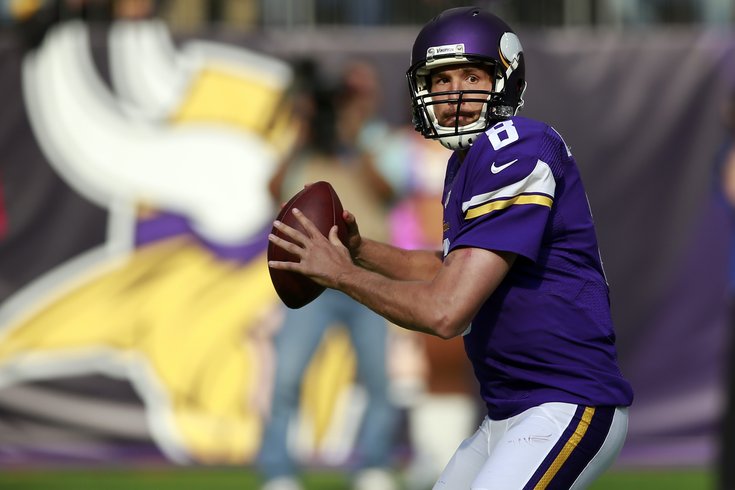 Sleevie Wonder was 3-4 at Lincoln Financial Field a year ago.

For the gambling degenerates, here are my Week 7 NFL picks. To note, the helmets indicate who I think will win the game, not cover the spread. At the end of the picks, I'll note a few teams that I like based on the spread.

Bears at Packers (-8): Aaron Rodgers no longer looks like the best football player on Earth, and he doesn't have to be to beat the Bears.

Giants (-3) "at" Rams in London: The Giants played as the road team in London in 2007 and had a "road" game in East Rutherford in 2005 against the Saints after Hurricane Katrina. And yet, they're the "road" team once again at a neutral site game, because, well, let's just call it what it is. The Giants get advantages from the NFL that other teams don't.

Saints at Chiefs (-6.5): After getting smacked around by the Steelers, the Chiefs regrouped during their bye week and won impressively on the road at Oakland. I smell an *Andy Reid winning streak.

Colts at Titans (-2.5): Allow me to take a moment to point out not just how bad the AFC South is, but how bad it has been for quite some time now.

Is -1259 bad? That seems bad. Whatever team wins this garbage division will just be a speed bump for some other good team in the first round of the playoffs.

Vikings (-2.5) at Eagles: The Vikings have not yet allowed an opponent to score more than 16 points in any game this season. Here is what they have done to opposing quarterbacks:

Oh, and they lead the league in sacks per game. Oh, and they're only allowing 77.8 rushing yards per game on 3.7 yards per carry, to a lot of teams who are good at running the football.

The Vikings' defense should have no trouble overwhelming the Eagles' offensive line and skill position players, with Sam Bradford managing the game well enough to get the win on the other side of the ball.

And the Sleevie Wonder apologists will go, "SEEEE? SEEEEEEEEEEEEE?!?" Vikings, 23-13.

Browns at Bengals (-10): Are the Bengals that good that they should be favored by 10 over anyone?

Redskins at Lions (-1): We can probably just go ahead and admit that the Redskins might be good. I'm not so sure they don't have the best offensive line in the division.

Raiders at Jaguars (-1): The Raiders actually have the worst yardage differential in the NFL. They are 4-2 because they've eked out two one-point wins, a three-point win, and a seven-point win over four teams with a combined record of 10-13. As a result, I can see why they're road dogs to the crappy Jaguars. The Raiders are going to be an overwhelmingly popular pick, I would imagine. My Vegas trap senses are tingling.

(I can't believe I'm willingly picking the Jaguars to beat a 4-2 team).

Ravens at Jets (Pk): The Ravens have the odd task of playing at MetLife Stadium two straight weeks, as they lost to the Giants on the road last Sunday. These are two bad teams fighting to stay mediocre.

Buccaneers (-1) at 49ers: The Buccaneers are bad, but there's really no way to justify picking the Niners at the moment, who may be even worse than the Cleveland Browns.

Seahawks at Cardinals (-2): The Seahawks are just one of those teams I feel comfortable picking every week, no matter who they play. In this case, Seattle has won three of the last four matchups against Arizona, by a combined score of 122-54.

Texans at Broncos (-7): Brock Osweiler vs. an extremely hostile crowd and the best defense in football, that would love nothing more than to pound him into the ground? Hmmm... Tough call here.