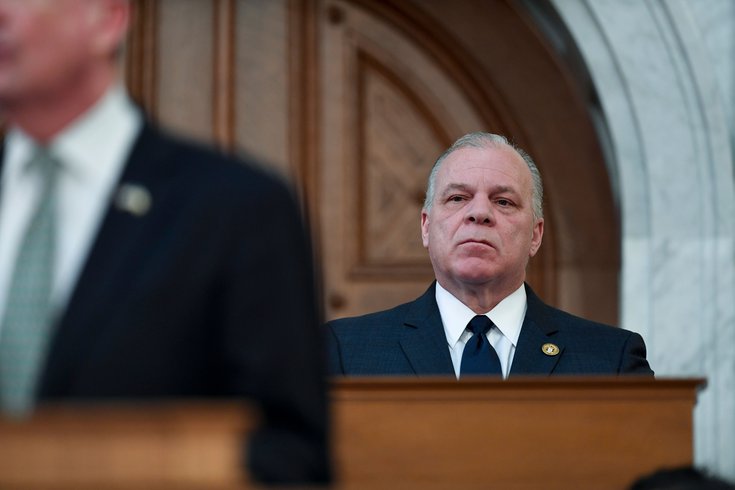 After losing his legislative seat in November, former New Jersey Senate President Steve Sweeney was ousted from his position on the the state's Apportionment Commission, which handles the redistricting process. Sweeney is now suing to get his seat back.

Former New Jersey Senate President Steve Sweeney was ousted from his seat on an important redistricting panel by fellow Democrats last week – a little more than two months after he lost his legislative seat in a massive upset.

But Sweeney, who was the longest-serving Senate president in New Jersey history, is not going quietly. He's now suing to regain his seat on the state's Apportionment Commission, which handles redistricting.

The lawsuit is the latest episode in an ongoing conflict between Democrats in North and South Jersey. The redistricting process, which will redraw the state's congressional boundaries for the next decade, has sparked tensions over their proposed map and strategy, Politico reported.

The Democratic factions disagreed over proposed changes to several districts, including the one represented by U.S. Rep. Donald Norcross, the brother of South Jersey power broker George Norcross III. The North Jersey Democrats reportedly feared the South Jersey faction could strike a deal with Republicans to draw the map in a way that better serves its interest.

Sweeney, of West Deptford, Gloucester County, was removed from the commission by Democratic State Committee Chair LeRoy Jones, who also is the Apportionment Commission's Democratic co-chair. He replaced Sweeney with Laura Matos, a longtime Democratic operative from Monmouth County. She will be the only Hispanic person on the panel.

"No person or organization's goals and ambitions are above the interests of our party and the people of this state," Jones said. "This decision was necessary to protect the future of the Democratic Party, and the integrity of the commission as a whole."

Sweeney is suing with the help of attorney Bill Tambussi, a lawyer who has frequently represented South Jersey Democrats in election matters.

The lawsuit alleges the state constitution doesn't allow Apportionment Commission members to be removed and requires geographical diversity to be considered when making appointments, NJ.com reported. Now that Sweeney is off the commission, it has no Democrats from south of Monmouth County.

Additionally, Sweeney alleges a contract was breached because he signed an agreement stating he would vote in tandem with the other Democratic members of the commission. This agreement does not permit removals from the commission without a violation of its terms, the lawsuit claims.

In the general election last November, Sweeney was beaten by Republican Ed Durr, a truck driver and Donald Trump supporter with no political experience.