Cheesesteak restaurant's fifth location in University City is broadening the menu's horizons, too 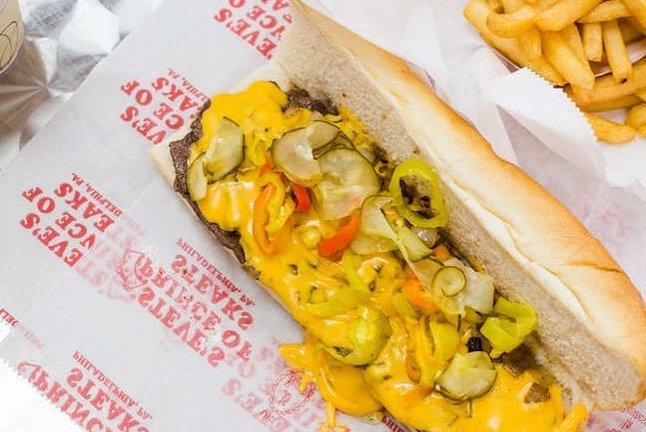 A Steve's Prince of Steaks cheesesteak.

The cheesesteak is a perfect late night food. In its paper wrapping, it’s portable. The cheese-meat-bread trifecta satisfies every craving you have after a few drinks. And it checks the “I didn’t go out drinking in just any city, I went out drinking in Philadelphia” box.

Steve’s Prince of Steaks is a great post-bar destination, but the franchise's newest location is cutting out the middle man: Starting Friday, if you travel to University City for your Steve's steak, you can drink and have cheesesteak in the same place, because 2018 is a magical time.

This new Steve's location originally was reported to be in the works nearly two years ago, so we've been waiting quite a while, but it sounds like the wait will be worth it.

The Steve’s drink menu will begin with beers and ciders, but will eventually evolve to include mixed drinks and frozen cocktails.

A daiquiri and a whiz wit might not be an obvious pairing, but you’re absolutely lying if you say you won’t at least try it.

This souped-up Steve’s will also serve pizzas (a cheesesteak pizza from a real steak shop could be a game-changer) and chicken wings. It makes sense; the location will be the largest of the five at over 2,300 square feet.

Those who head to Hamilton Court on Friday and flash a student ID from Penn, Drexel, or University of the Sciences will receive free steaks, fries, and sodas between noon and 2 p.m., and 4 and 6 p.m.

I-CE-NY and Creamery Cafe also are expected to get in on the freebies game when the Court opens on Friday.