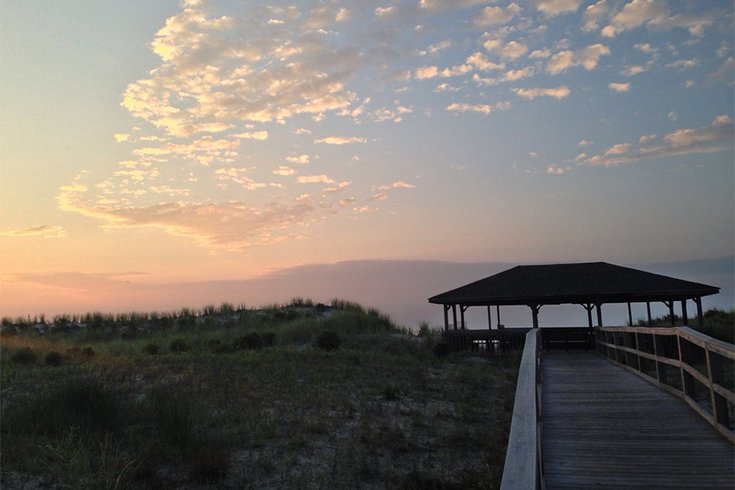 For early-risers, the sunrise at the Stone Harbor beach pavilion is a sight to behold.

A sunken piece of history turned up at the Jersey Shore last weekend after storms and high winds blew through Stone Harbor.

Photos of a shipwreck at the southern portion of Stone Harbor beach began circulating online over the weekend. Word of the 25-foot vessel drew photographers out to the beach to document the discovery.

Archives from the Five Mile Beach Sun recount the 1886 wreck of the D.H. Ingraham, a schooner that caught fire near Hereford Inlet.

Locals believe the location of the wreck and the appearance of the remains are a likely match.

A few of our photos from Christmas morning, Stone Harbor Point NJ pic.twitter.com/dhL1rVCrIN

The Schooner D.H. Ingraham was bound for Richmond, Virginia, from Rockland, Maine, when it encountered a nor'easter in early December 1886. Capt. James Mullen had a crew of five delivering a shipment of limes.

Run aground, the crew lit torches and drew the attention of a surfman at the Anglesea Life Saving Station.

Under normal conditions, rescues might have been delayed until the following morning. Fearing that the captain and crew wouldn't survive, Keeper Christopher Ludlam and six surfmen set out immediately to make the rescue, braving treacherous weather to reach the D.H. Ingraham after more than an hour of rowing.

The seven members of the rescue crew were awarded medals from the Life Saving Service in 1888. Two of the medals are on display at Hereford Lighthouse.

Shipwrecks are not uncommon along the Jersey Shore. In 2014, contractors for the U.S. Army Corps of Engineers found remnants of a mystery ship while making repairs at Barnegat Inlet after Hurricane Sandy. Hereford Inlet historian Steve Murray estimated 60 wrecks occurred near that location alone between 1766 and the early 1900's.

Officials did not immediately say what would be done with the ship's wreckage.