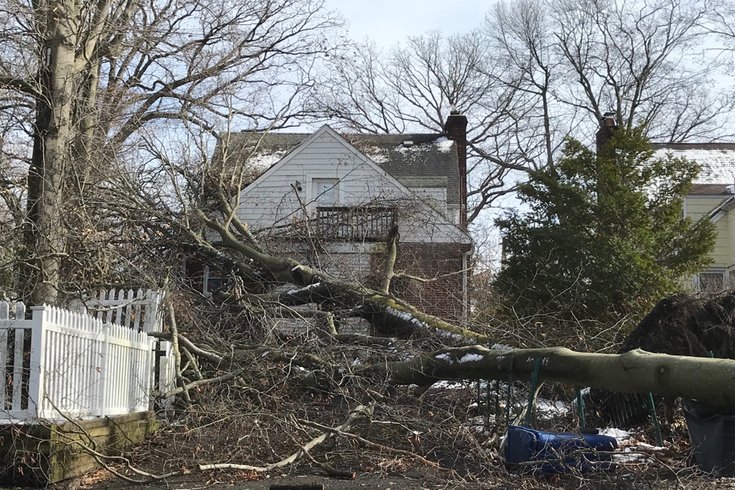 A fallen tree is shown on Saturday along Edge Hill Road in Abington Township.

The region is still feeling the impact of Friday's Nor'easter, which dumped as much as 9 inches of snow and packed a gusty punch.

The heavy winds – and near-hurricane-force gusts in some places – knocked down trees, poles and power lines leaving hundreds of thousands of residents without electricity since Friday afternoon.

Outages were reported across the region, including Conshohocken, Lower Merion and Limerick in Montgomery County, Upper Southampton, Bristol and Washington Crossing in Bucks County, Newtown Square and Ridley Township in Delaware County and Kimberton and Coatesville in Chester County.

As of 10 a.m, PECO reported that about 283,000 customers were still without power on Saturday morning. With a total of more than 570,000 customers impacted by the storm, the utility has managed to restore power so far for a little less than half of them.

PECO said the power may be out for several days and in many cases, estimated times of restoration of power were rescinded Friday night. But it said Saturday morning that estimated restoration times again will become available through the day specific outages are assessed. (To report a downed wire to PECO, call (800) 833-7476.)

PECO said it was working 24-7 to restore power and was awaiting additional manpower to assist its existing crews and contractors. It was also responding on Facebook to customers, many offering concern about not yet seeing crews in their neighborhood.

The utility also cautioned residents to stay away from downed trees and wires, and report electric or natural gas emergencies at 1-800-841-4141.

Many area hotels were booked solid on Friday night as residents took refuge from their cold, dark homes. Many guests had reserved for Saturday night, too, in case the power stayed off.

Meanwhile, SEPTA continues to deal with the effects of the storm as riders try to get to the Philadelphia Flower Show, which opened Saturday at the Pennsylvania Convention Center in Center City.

Citing equipment shortages, it said Regional Rail passengers should expect delays and crowded conditions. Service and schedules on all modes of transportation could be affected and SEPTA was directing customers here for updates.

Service between Lansdale and Doylestown continues to be suspended.

PATCO was reporting no delays.

Some municipalities opened warming centers and shelters on Friday night to assist residents without power.

The Lower Makefield Municipal Building in Bucks County was open for use as a warming and charging station.

In Montgomery County, officials opened the Keith Valley Middle School, 227 Meetinghouse Road in Horsham as an overnight shelter. The Red Cross of Philadelphia was assisting.