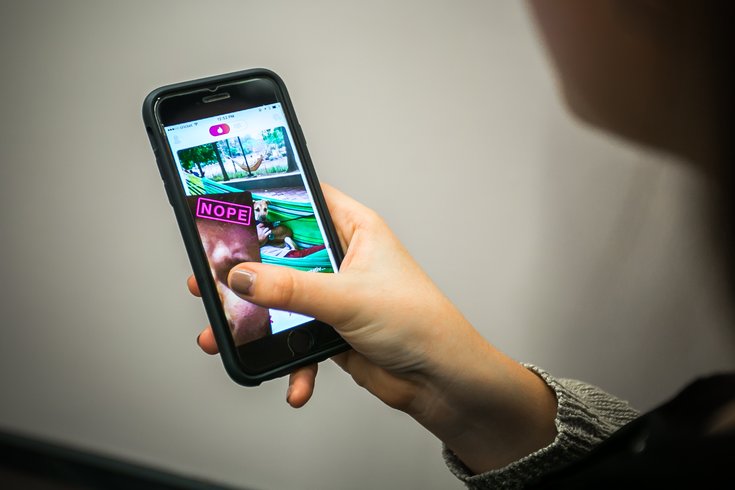 A woman swipes through profiles in the Tinder app.

I'm not sure which made me cringe more – when my first and only OKCupid date compared Temple University, my alma mater, to something along the lines of a "disaster zone" or when he touted, "There's just something about having Penn on your resume."

If the guy I went out with is reading this, I'm sorry. But we both know the date went poorly. In case you need some more evidence, note:

1. The deafening silence, er, ghosting, that followed after we hugged and said, “Let’s do this again.”

2. The permanent archive kept in the form of a poorly Instagrammed neon sign I captioned, "Today was the weirdest day of my life. Now I'm going to eat some Chinese food."

3. And that I totally saw you on Tinder last year, and I swiped left. You probably did, too.

I'm not the only one with bad dating stories. You have them too, and PhillyVoice is encouraging you to share them using the form at the end of this story. We’ll be compiling our favorites, and don’t worry, we’ll protect the identities of all parties involved.

"Tinder is one big dopamine rush, and they work it like a video game." – Kevin Cook, dating coach

Summer 2017 is flying by, and chances are you'll have more dating tales to tell between now and the end of August.

A Pew Research Center survey shows that stigmas surrounding online dating are rapidly declining, with 27 percent of 18- to 24-year-olds admitting they've tried online or mobile dating, tripling the number who did in 2005.

Still, one-third of those Americans surveyed who actually have tried e-dating said they've never gone on a date with someone they met through apps like OKCupid or Tinder.

On a similar note, just 5 percent of Americans who are married or in serious relationships say they met their partners online.

You don't need research to back up that dating is hard. But, don't blame Tinder – dating has always had its difficulties.

RELATED: Members-only dating app The League launches in Philly. Are you worthy?

While every generation has its gripes about finding a significant other, Temple University sociology professor Dr. Amanda Czerniawski said online apps and sites really have revolutionized how society thinks about dating or hooking up.

"We used to lament about the three-day call rule," said Czerniawski, who instructs courses in sexuality and body image. "With texting, it's like the three-second rule. And, how do you text? We have over and over again the same questions and dilemmas, but they've altered with technologies."

Kevin Cook, a Philadelphia dating coach, started his business, "Root of Attraction" about 10 years ago. He has about five clients at a time, with the average age range from the late 20s to mid-30s.

"I started [Root of Attraction] because I struggled with dating for most of my life and dedicated 10 to 15 years of it to figuring it out," he said.

Cook hears plenty of bad dating stories – some more serious than others – but he said there's no formula for what makes a date bad or how to make a bad date better.

"Honestly, the most important thing is learn how to communicate better,” Cook said, “but it takes a little bit of time to know what that means.”

"We used to lament about the three-day call rule. With texting, it's like the three-second rule. ... We have over and over again the same questions and dilemmas, but they've altered with technologies." – Amanda Czerniawski, Temple University

Cook and Czerniawski both said there's no real science as to why dating might seem more popular in the summer other than warmer weather meaning more activities and a desire to have someone to do those activities with. They agree, though, that online dating and swiping apps have made that process easier.

But that doesn't mean there aren't some real problems that come with their usage.

"Tinder is one big dopamine rush, and they work it like a video game," Cook said.

As Tinder began to rise in popularity years ago, Czerniawski said her students expressed frustration toward the app and "hookup culture." She said that they wanted to go back to more traditional forms of dating.

Now Tinder and apps like it have become normalized, she said, now extending past college-aged, young adults and to people in their 20s and 30s.

As a sociologist, Czerniawski said there are dangers with swipe-dating apps, particularly how the lack of personal content offered among prospective partners lends itself to physical interactions rather than relationships.

“Technology itself is great,” she said. “In terms of participating in new forms of dating, you can just, you know, swipe. ... There’s a great perception of choice and people end up suffering from exhaustion.”

There is pressure involved, too, from what to write in your profile description to which pictures of yourself to choose.

"There are already unwritten rules," Czerniawski said. "Do you use the bathroom selfie pic? do you take a picture with your pet? Do you use a duck face?"

Cook gets the negatives of it. He said that the biggest issue he helps his clients with is how to become better communicators, and with Tinder, it’s so easy to write nothing at all, leaving people to just screen for looks.

He warned the lack of content users can put in their profiles on swiping apps doesn't necessarily mean bad first dates, but it does mean a lot of people end up going on first dates they shouldn't.

But it’s not all bad. Cook said he doesn’t see apps like Tinder going anywhere at all, mostly because it’s just one factor that’s greatly helped normalize online dating.

"Tinder has created something really new in the dating world, and I have a hate/love relationship," Cook said. "While it's great for getting dates, it’s inefficient at keeping relationships."