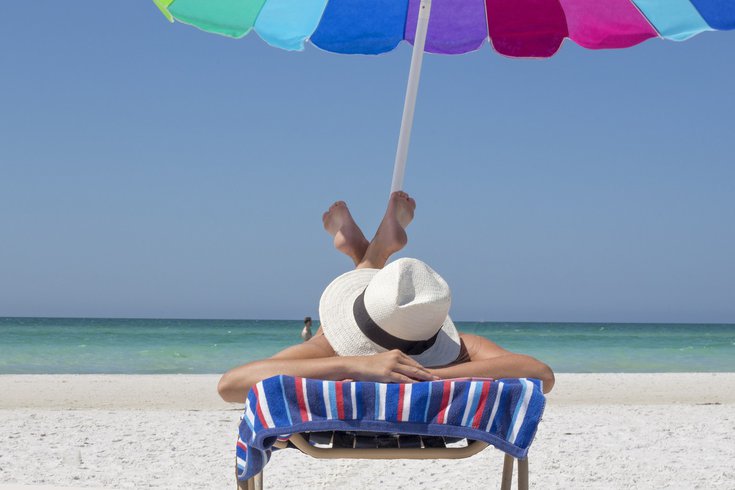 Don't forget to practice sun safety tips this summer while basking in the sun.

People are flocking outside to enjoy beaches, parks and outdoor dining as states loosen COVID-19 restrictions just in time for the warmer weather.

Because many people essentially spent the last several months indoors, local dermatologists caution that their skin may be extra sensitive to the sun's rays. They advise people to practice sun safety as they begin venturing outside.

The basic principles of sun safety include wearing a hat and sun-protective clothing and applying sunscreen to exposed skin. Dermatologists also encourage people to seek shade whenever possible and to stay hydrated.

Sunscreen provides an important barrier against the sun's ultraviolet rays, which accelerate signs of aging and increase skin cancer risk. UVB rays are the main cause of sunburn, but UVA rays also contribute to premature skin aging and skin cancer.

The best option is a broad-spectrum sunscreen, with an SPF of at least 30, that offers UVA and UVB protection, according to Dr. Joseph Sobanko, director of dermatologic surgery education at Penn Medicine. He recommends those containing zinc or titanium because they block harmful rays rather than absorbing them.

"Apply to any skin that will be exposed to the sun before you go out and reapply for every hour you are outside," he said.

Dr. Naomi Lawrence, a dermatologic surgeon and head of procedural dermatology at Cooper University Health Care, recommends applying a cream sunscreen in front of a mirror at home and then bringing a spray or stick to reapply. People who are swimming should always reapply when they get out of the water, because no sunscreen is truly waterproof, she said.

Though sunlight is an important source of vitamin D, which strengthens bones, people don't need to spend hours outside to get it. In reality, Lawrence said, people just need to get 15 minutes per day, or 2-3 hours per week.

She also emphasized that getting a base burn does not perfect a tan or protect skin. The sun still causes damage even when people have tans, she said, adding that skin looks better if it has been protected.

Dermatologists encourage people to avoid heading outdoors between 10 a.m. and 4 p.m. because ultraviolet rays are strongest at mid-day.

"Go out early when the sun is less strong and then take a break and go back out after 4 p.m. to be kind to your skin," Lawrence said. "Seek shade as much as possible."

More than 5 million people are treated for skin cancer every year in the United States. It is the most common cancer in young adults.

Lawrence compared the risk of sunburn to the risk of smoking – the amounts of carcinogens in cigarettes and ultraviolet rays are very similar.

Basal cell carcinoma typically appears on the head or neck and looks like a shiny pimple that is easily irritated. Any pimple that won't go away on its own might be a cause of concern, Sobanko said.

Squamous cell carcinoma also can be found on the head and neck, as well as the back of hands. It can look like a flat lesion with a rough, scaly surface or a firm red nodule.

When caught early, skin cancer is treatable. The cancerous lesions can be surgically removed, but chemotherapy, radiation or photodynamic therapy – which uses a combination of laser light and drugs – are needed when it metastasizes.

How to examine moles

Skin checks performed by a dermatologist are an important way to identify any lesions or suspicious moles.

Any new lesion that bleeds easily or forms a sore that doesn't heal should be evaluated by a dermatologist, Lawrence said. So should an old spot that takes on a different appearance.

Because moles can turn cancerous, dermatologists recommend using the ABCDE's of skin cancer to identify concerning moles. Moles that are asymmetrical, multicolored, larger than a pencil eraser or have a jagged border could be cancerous, they said. Older moles that evolve also should raise a flag.

The frequency of skin checks depends on a person's risk for skin cancer, Sobanko said. People with a history of skin cancer or sunburn are at higher risk should do a self-examination once a month or visit a dermatologist twice a year. So should people with lighter skin, hair and eyes.

"Anyone who had a solid organ transplant and is on immunosuppressive drugs is also at higher risk of skin cancer," he said. "Fifteen percent of the people I operate on had an organ transplant."

People with lower risk should still do self-exams, but they don't have to see a dermatologist on a routine basis. But Sobanko encouraged them to reach out to a dermatologist if they see something concerning.