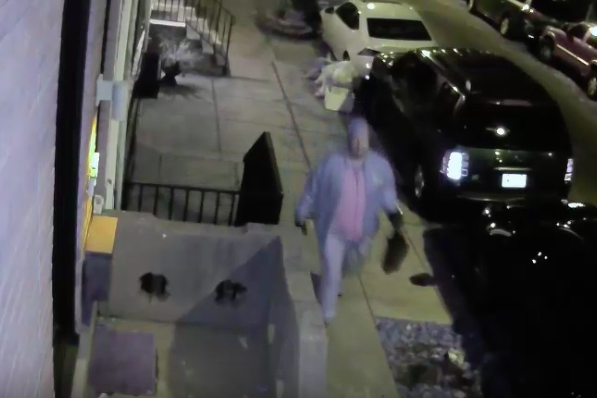 Philadelphia police have released video of suspect who spray-painted multiple homes in South Philadelphia on Monday, including the home of Philadelphia rapper Meek Mill's grandmother.

Authorities said the vandal struck between the hours of 10:30 and 11:30 p.m. at various properties.

Surveillance video showed the suspect spray painting homes located in the 700 block of South 18th Street, the 1800 block of Bainbridge Street and the 1000 block of S. 18th. Street. He was last seen heading south on 18th. Street crossing Washington Avenue, according to police.

Investigators said the suspect spray painted the words "ACORN" and "ACORN pals" on the walls of several homes.

Meek Mill, who earlier this week posted video of the vandal spray painting his grandmother's home, said the suspect wrote "racial remarks" on the walls. Police stopped short of that designation. It isn't clear whether "ACORN" is a reference to the defunct community organizations that became a subject of controversy during and after the 2008 presidential election.

The suspect appears to be a heavyset white male who was last seen wearing jeans, a pink sweatshirt and a blue button down shirt.

Anyone with information about this suspect is asked to contact police at 215-686-8477.