An old-fashioned Thanksgiving side dish to try: How to make potato filling (not stuffing) 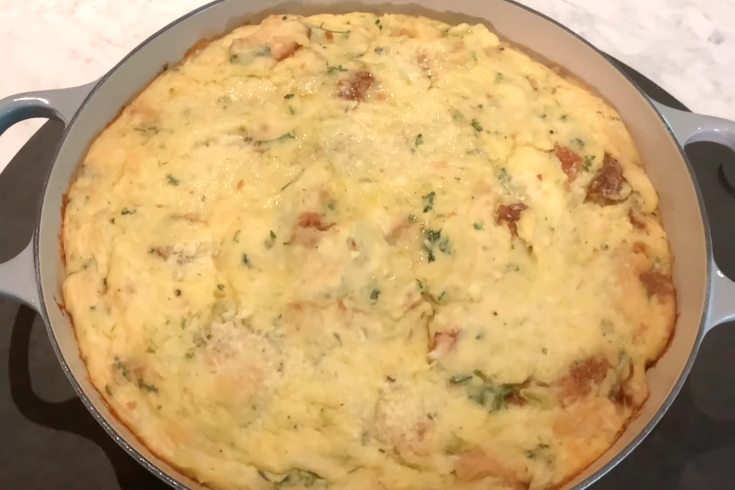 Potato filling, shown above, is a Pennsylvania Dutch side dish. Served at Thanksgivings across Berks County, it combines bread stuffing with mashed potatoes.

Thanksgiving dinners across the country tend to feature a few of the same staples: turkey, cranberry sauce, green beans, mashed potatoes and stuffing. But for many Pennsylvanians, there's another star side dish.

A starchy marriage of mashed potatoes and stuffing, filling is a dish with deep roots in Berks County. According to one Pennsylvania Dutch food historian, filling has been around at least since the 1700s, though it didn't take off until the following century. Today, it's as popular as ever. The Pioneer Grange in Topton, which sells its own filling, has customers calling in September to secure the prized side dish for their Thanksgiving meals.

Filling can be used in lieu of stuffing to dress your turkey, but it also stands alone as a side. While there are plenty of modern takes, if you want to create your own authentically Amish (or Mennonite) version, try one of these time-honored recipes. Each is pulled from the archives of the Sunday Patriot-News in Harrisburg. The first was printed in 1955 and comes courtesy of Sally Long, while the second was submitted by a reader, Mrs. C.S. in 1961.

Peel and cook potatoes. Add milk and mash as for mashed potatoes. Fry bread and onion in shortening to golden brown. Add to potatoes with parsley, egg and flour. Mix. Add seasoning to taste. If too stiff, add more milk bringing mixture to consistency a little thinner than mashed potatoes. Grease casserole and fill with mixture. Brown in 375° oven for 1/2 to 3/4 hour. Serves four.

Pinch bread in tiny pieces, add the onion and the eggs. Cut the potatoes as for stewing, cook them 15-20 minutes, and add them to the bread mixture. Moisten the mixture with a little of the potato water to the consistency you prefer. Do not pack the bird too tightly as this filling is very solid. If there is any left over, put it in roaster half-hour before the bird is finished.