The one where the women tell all 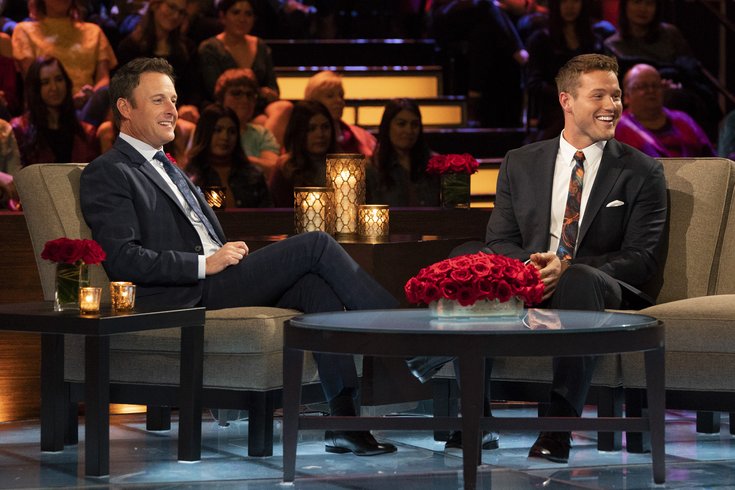 Chris Harrison and Colton Underwood talk to the former contestants on 'The Bachelor.'

The Women Tell All episode of “The Bachelor,” or better known as the “Bachelor in Paradise” audition, is a tradition unlike any other (Jim Nance voice). All of Colton’s ex girlfriends come together in one comfy LA studio to air out their dirty laundry toward each other, and boy there was no shortage of it.

Kicking off with a beautiful montage of all the iconic breakups from Bachelor Nation, “The Bachelor” set the tone right from the start.

From Molly and Jason (who are now happily married with children after he asked for her back at After the Final Rose taping) to Chris Soules and Ashley I. (Ashley I. is now engaged to Jared, and who we just interviewed on our podcast) to one of the most iconic, juiciest breakups in “The Bachelor” history between Jake and Vienna, breakups were the theme of the night.

Now that the stage is set, it’s time for the ladies of Colton’s season to let their cat claws out. With intermittent shots of Colton trying out for a Dove commercial while showering for what seemed to be the entire episode, host Chris Harrison channeled his inner Jerry Springer to calm the ladies down. 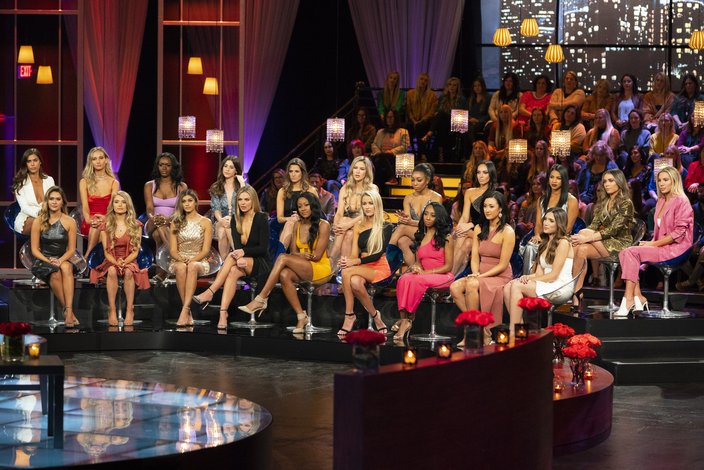 The contestants on 'The Bachelor' get a final moment with Colton.

First up Courtney and Demi. They had beef all season, which started by Demi calling Courtney out for spending all her time complaining about Demi and spending literally zero time with Colton. Demi even let Courtney have the floor at the end to talk to Colton (after his five hour shower) and Courtney was literally a mute. She said nothing. Classic.

The best part of this feud was when Courtney (out of nowhere) got up out of her chair and softly assaulted Demi with a pacifier. Can’t get pettier than that.

Next fight to resolve, Onyeka and Nicole. Nicole accused Onyeka of bullying her all season, but the rest of the “Mean Girls” were not buying Nicole’s sob story. Onyeka must’ve thought this was the National Spelling Bee because at one point she stood up and let America know the dictionary definition of bullying. But we didn’t get the country of origin so Onyeka was disqualified, but not before paying homage to Ariana Grande by telling Nicole “Thank U, Next.”

Before a few select ladies sat down in the “hot seat” with Chris Harrison, Katie had the floor. Katie, “The Bachelor” town crier, is responsible for spreading the rumors that certain contestants were not there for the right reasons, and then mic dropped out of the show.

Katie doubled down on her stance saying she heard, and saw actions, that were not what Colton was looking for. Already in the hole, Katie ups the ante affirming she was talking about Caelynn and Cassie. According to Katie, she heard Caelynn and Cassie talking about being “The Bachelorette” on the bus from the airport to the hotel in Singapore. This sent the ladies in quite the tizzy. In what looked like the trading floor of the New York Stock Exchange, all the girls were yelling at each other and talking over each other. But why was the crowd not chanting, “Jerry, Jerry!” during all of this? Caelynn and Katie said they had a phone call after the show and cleared the air… Or did they?

Refusing to fold, Katie went all in saying that Caelynn’s manipulation of the conversation was exactly what Hannah B. warned America about. After Kirpa joined the partying saying Caelynn was talking about sliding into old cast members DM’s, Hannah B. was asked what she thought (since you know the whole beauty pageant drama). Hannah B., wanting absolutely nothing to do with the situation, treated Caelynn like Michael Scott treated Toby Flenderson saying she thought Katie’s version was the most accurate one. The jury is still out on this edition of “Couples Court” but rumor has it this is feud is being elevated to “Judge Judy.”

Hot seat time! Demi gets the first sit-down with Chris Harrison. Covering a wide variety of topics, Demi reveals that she is promiscuous, and proud of it because it’s 2019 (yes, you read that sentence correct). At the end, Chris teases that we will see Demi on “Bachelor in Paradise.”

The woman dubbed this season’s Ashley I. (because she cried the entire time while filming) is up next. Nicole got very emotional hitting on why she cries all the time (claiming because she is Latin) but then also told a touching story of how she takes care of her autistic brother, and that he is her best friend. Then, truly out of left field, Chris Harrison becomes Oprah and gives Nicole a one-year free supply of Halo Top ice cream to help her get through all her future crying bits. You go Glen Coco.

Hannah B., who some are saying is the frontrunner to be the next bachelorette, gets her shot at redemption in the hot seat. She said how hard it was to open up to Colton like she did and that she has this pressure to be perfect (because you know, the beauty pageants). With the line of the night stating she wanted someone to love her fiercely, she gets to re-do her terrible toast from her first date with Colton. With two contestants on this season both from Alabama, it only took 10 episodes to get a “Role Tide” joke, which is how Hannah B. perfectly ended her pretend toast with Chris Harrison.

Before Colton gets out of the shower and joins Chris Harrison, there is one more hot seat to go; Caelynn. Clearly Caelynn was in love with Colton, but was blindsided that Colton didn’t love her back. Caelynn and Chris discuss her sexual assault and how hard that was to discuss on a national TV show. This was easily the most moving part of the episode, and led to some of the contestants giving Caelynn a standing ovation.

Colton finally joins the party, and I’m sad to report he was fully clothed. Looking more orange than Donald Trump by sporting a terrible spray tan and bizarre lion/ tiger/ some animal tie, he faces his ladies. And it was rapid fire from the start. Demi tells Colton he missed out on a great fantasy suite date with her (because she is promiscuous, remember?) Caelynn asked what went wrong, to which he had zero answer. Hannah B. proclaimed he was a god dude with a good heart, but she deserves to be loved too. But what would a Colton hot seat be without virginity questions? Dark horse Sydney bluntly asks Colton if he is still a virgin. He stalls and starts rattling off incoherent sexual innuendos. Chris can’t take it anymore and cuts him off. We never got the answer.

Chris and Colton discuss his fence jump. Contrary to popular belief, Colton did not think he was Superman and thought he would land on the snack tent or audio guy (because that justifies his chaotic jump that much more, right?) Colton reveals him being alone; wandering the Portugal wilderness was his favorite part of the season. Ok Alexander Supertramp.

The episode concludes with the season’s bloopers. After another sexually-charge montage of Colton saying “nailed it” after almost everything he did, we also see Colton made out with a stray dog. Other notable blooper highlights include Demi stuffing about a million salami’s in her mouth, and a bat went rouge in the bachelor mansion, causing all the ladies to lose their minds.

Chris Harrison’s final gift to Bachelor Nation was a preview of what’s to come on the two-night season finale March 11 and 12.

• One contestant who was not present at Women Tell All was Elyse. Elyse, a member of Colton’s Cougar Club, self-eliminated herself early on in the season. She was a pretty important contestant this season, so why was she not at Women Tell All? Well I wish I had something juicer to report but she apparently had a family wedding the night the episode was filmed, so she did not attend the taping.