Longshot Laurence Kotlikoff shares his vision for the United States 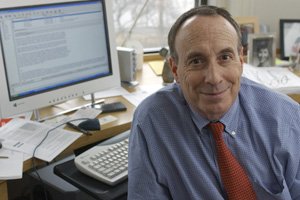 Just over two weeks remain until the 2016 presidential election on Nov. 8, but if you ask economist and University of Pennsylvania graduate Laurence Kotlikoff, that's plenty of time to mount a Herculean campaign to become the nation's next Commander-in-Chief — or, at the very least, bring down Donald Trump.

In a country where politics have become a theater of the absurd, Kotlikoff and running mate Edward Leamer, an economist at UCLA, have emerged as perhaps the only formal write-in ticket statistically capable of securing 90 percent of all electoral votes in the United States.

It's an incredibly steep hill to climb for a write-in candidate to reach the level Kotlikoff has attained. Only 41 states — about 91 percent of the Electoral College — explicitly permit write-in presidential candidates. Of the remaining nine states, South Carolina prohibits write-ins, seven others operationally block them by failing to leave a space and Mississippi bizarrely only counts a write-in candidate's votes if they die prior to the election.

"I'm not a guy who waffles. I figure out the right answer and stick with it," Kotlikoff said. "All of this can be done when people think outside the box for practical solutions."

No big deal, says Kotlikoff, who has lined up the electors to make him a formally registered write-in candidate in nearly every state that allows it. He's on the ballot in Lousiana and Colorado.

"I may well be the only such candidate in any postwar election to do this," Kotlikoff told PhillyVoice on Sunday morning. "Believing that nationally registered write-ins can't win because they never have is likely forming an inference based on absolutely zero data."

Kotlikoff made this argument last month in an op-ed for Forbes and challenged the naysaying wisdom of political scientists in a Bloomberg piece on the subject around the same time.

The problem, Kotlikoff believes, is a largely silent media that has ignored his candidacy.

"I find it passing strange," he said, quoting Mark Twain, in a recent email to reporters, "that not one of you has written a word about my campaign."

Many Americans probably tuned into last week's episode of "Last Week Tonight," when host John Oliver ran through an embarrassing takedown of third-party candidates Gary Johnson and Jill Stein. It betrayed a nauseating lack of conviction about any of their policy positions beyond talking points and a simplistic appeal to public dissatisfaction with Donald Trump and Hillary Clinton.

Kotlikoff, like many alternative candidates, is also seeking a "radical overhaul" of American government, although his platform is based off years of domestic and international experience as an economist. He's a professor of economics at Boston University, a research associate of the National Bureau of Economic Research and a Fellow of the American Academy of Arts and Sciences. He's also worked for the International Monetary Fund and World Bank and served on President Reagan's Council of Economic Advisors.

"About 80 percent of the electorate is extremely unhappy about the choices," Kotlikoff said. "I'm the best-kept secret here because the press has hidden my candidacy for the past six months. It's because people don't understand the nature of registering as a write-in."

Anyone interested in digging into Kotlikoff's policy proposals can find them in a book available for free at his website. As one might predict from a man who studies intergenerational economics, his biggest talking point surrounds reforming the nation's fiscal institutions by fundamentally restructuring the tax code, healthcare and social security systems.

Kotlikoff's positions are a pretty compelling mixture of ideas espoused by both conservatives and liberals, a recipe that could either cancel out enthusiasm or build unprecedented bipartisan support.

"The whole premise of my campaign is to eliminate the fiscal gap facing our kids," Kotlikoff said. "It's a $206 trillion number when you account for everything on and off the books."

To fix Social Security, Kotlikoff wants to freeze the current system, pay out all accrued benefits to seniors and set up a parallel system that will work for the younger generation.

"It's a user nightmare at the individual micro level," Kotlikoff said of the current Social Security system. To eliminate the "cherrypicking" and adverse selection of the health insurance industry, he wants to develop a single-payer healthcare system with multiple private insurers, offering citizens vouchers calculated based on need with a basic coverage policy for everyone. The plan, he says, has been endorsed by five Nobel laureates in economics.

The tax code, meanwhile, would be completely reworked. Gone would be the estate tax, the gift tax, and the personal and corporate income taxes. In their place would be a FICA tax with no earnings ceiling; a 20 percent value-added tax; an inheritance tax of 20 percent above $5 million; a $2,000 negative income tax, a $50 per ton carbon emissions tax; and a personal consumption tax on the rich as "implicit and imputed rent from adorable goods" such as yachts and private jets.

That list, likely blood-boiling to many on all sides of the fence, isn't as obviously a Republican-leaning proposal as it appears, says Kotlikoff, who has expressed admiration for Bernie Sanders and claims Clinton's tax policy will give the super rich a pass no matter how high taxes are raised.

"When I talk to billionaires — about five or six in my day — they start grinning and laughing when I bring up taxes," Kotlikoff said. "No, we don't pay taxes, they say. The Super rich don't declare taxable income because they borrow against their assets for consumption. They don't have to realize any capital gains. When they die, they can leave appreciated assets to kids through a step up in bases. It's a complete scam, and you don't have to be in real estate like Trump to do this."

A native of Pennsauken, New Jersey, Kotlikoff's father owned the prominent Kotlikoff department store at 25th and Federal streets before suburban flight changed the city's business landscape in the 1980's. He graduated from Penn in 1973 — five years after Donald Trump finished at Wharton — and went on to travel widely before establishing his business, which has fewer than 15 employees.

As president of Economic Security Planning, Inc. — a software company that provides personal finance and benefits solutions — Kotlikoff says he's dealt with the hurdles of running a small business for 23 years.

"Hillary Clinton is a lawyer, she's never run a business, and Donald Trump is more of a golden spoon," Kotlikoff said. "He never had to start a company from scratch. He had a team of lawyers and accountants to help him sort all this out. If we want to grow this economy, we have to make it feasible for small businesses to operate. The red tape is there. It's real. It's not just something Republicans refer to in order to get votes, and Democrats should be just as worried about it."

His views on government and society extend far beyond the realm of economic policy.

He's a pro-choice candidate who believes Roe v. Wade is established law. He supports Merrick Garland's nomination to the Supreme Court. He advocates for the legalization of marijuana, opposes the War on Drugs and decries the mass incarceration of African Americans.

On guns, Kotlikoff supports stricter background checks and a ban on assault rifles, yet also advocates for the deputization of "well-scrutinized" citizens with non-lethal weapons to avoid situations like Orlando and Dallas. He's a hardliner on nuclear non-proliferation who urges an aggressive policy toward North Korea and Iran, both of which he says pose threats equivalent to the Cuban Missile Crisis.

"I'm not a guy who waffles. I figure out the right answer and stick with it," Kotlikoff said. "All of this can be done when people think outside the box for practical solutions."

For Kotlikoff, it's about taking on what he calls "irresponsible generational expropriation" that amounts to "fiscal child abuse."

"Things don't pay for themselves. We need to have government," Kotlikoff said. "It just has to be good government."

As for his major-party competitors, Kotlikoff believes he's more likely to woo away Trump voters than Clinton voters, especially given the recent abandonment of Trump by some Republican leaders in Congress and the allegations of sexual harassment and assault. In his own words, Kotlikoff says Trump appears to be a sick man.

"I think Donald Trump is perhaps fit for kindergarten," Kotlikoff said. "He is in no way fit for the presidency. He does not have any handle whatsoever on our public policy issues. He has shown that he has no respect for anyone but himself. He's shown that he's racist, misogynistic, a narcissist, xenophobic. I'm not here to diagnose him, but I think he has some sort of mental health condition."

Hillary Clinton, he says, is a non-starter for the country.

"I think Hillary will be public enemy number one for Republicans and will blocked by Republicans for four years," Kotlikoff said.

On what many believe will be an unpredictable election day, Kotlikoff has a simple message for people who would cast their vote for Donald Trump.

""Let me be your Republican," Kotlikoff said, "because I am trying to flip the entire party in the next two weeks. Let everyone know that there's a new person in town. He's legal. He can get 90 percent of the Electoral College. All you have to do is vote Laurence Kotlikoff and Edward Leamer in the spaces provided. Just four words."