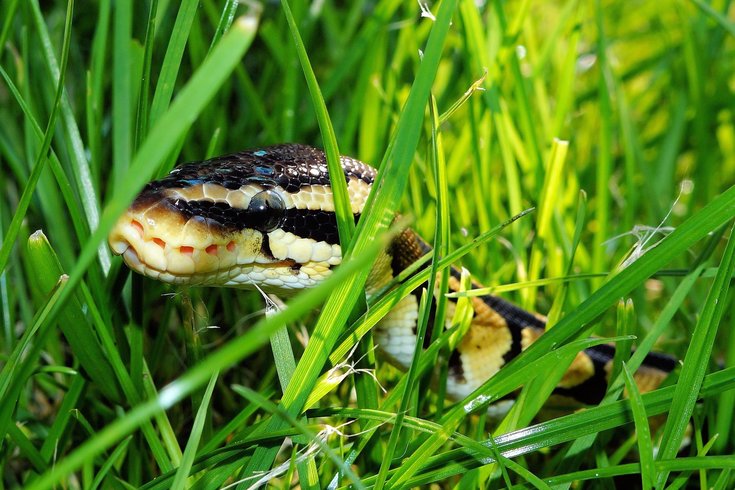 A snake slithers in the grass.

Police in East Greenville, Montgomery County, received a belated report of a missing 7-foot red rail boa constrictor on Monday, and as of last night, the snake still hadn't been found.

Apparently the pet reptile – his name is Vinny and he's 10 years old – went missing from the owner's home and, there was an unconfirmed sighting near Bieler Park, according to a Facebook post made around 12 p.m. Monday.

Oh, and the snake has been missing for close to four weeks now.

Police on Tuesday morning confirmed the case was no longer being actively investigated following the revelation that the snake had been missing for so long.

A quick Google search for "red tail boa constrictor" produced many terrifying images of enormous snakes and I don't recommend it.

I'll save you the search and just tell you what you need to know.

This kind of boa constrictor thrives in tropical climates. Even when kept as pets, they need to be kept in a hot, humid environment. You know, just like the Pennsylvania wilderness in the summertime.

Reptiles Magazine calls them "voracious eaters," which I don't like at all, but scientifically I will take this to mean the snakes are carnivores with a substantial appetite. They mainly eat rodents, so it's probably safe to say this snake isn't going hungry. On the other hand, if the snake was bred domestically, it may not know how to handle eating live rodents; most pets would be fed a frozen and thawed rodent.

So, the odds are stacked against this poor runaway. Although, in August 2013, another 7-foot-long boa constrictor survived 10 days on the lam and that was in Delco.

In that instance, the boa – named Snakey – had escaped from the home of a veterinarian and animal behavior specialist in Swarthmore. It eventually was found heathy and sunning itself in a neighbor's yard less than a block away, but the search for the snake caused nearby residents to walk their pets at night armed with sticks and flashlights. It also spawned the Swarthmore Snakey Twitter account to chronicle the snake's adventure.

The missing snake in Montgomery County is likely to have bright red markings on it like this. (Only click if you're prepared to be confronted with a huge image of a terrifying snake.)

If you spot the snake, police in East Greenville are asking you report it immediately.