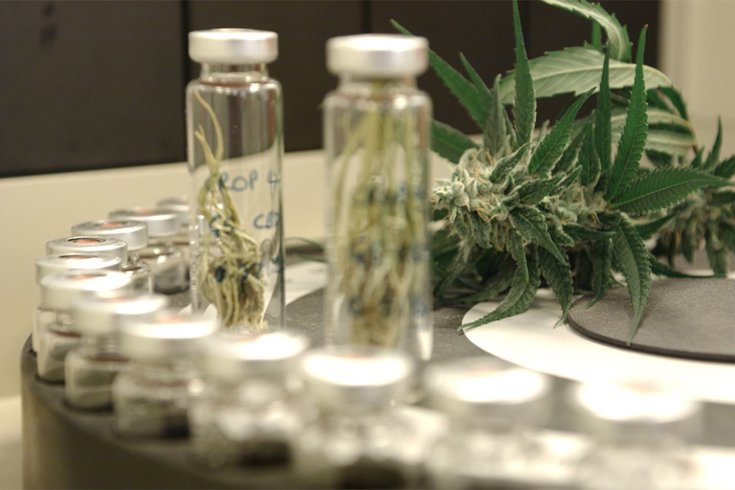 Marijuana is seen in a lab at GW Pharmaceuticals.

Thomas Jefferson University is launching a new patient database for users of medical marijuana to better understand the drug's effectiveness as a treatment.

The Philadelphia university announced last week its new website, mmj.org, will start recruiting patients this summer. The goal is a registry of 100,000 medical marijuana patients.

The initiative is being run by the university's Lambert Center for the Study of Medicinal Cannabis and Hemp, a center that received $3 million in funding to launch in 2016, the same year medical marijuana was legalized in Pennsylvania.

Jefferson is billing the database as the "largest and most comprehensive clinical database yet accumulated in the emerging field of medical marijuana."

“We are launching the mmj.org patient registry to fill significant gaps in the science with the largest longitudinal study ever of patient-reported outcomes with medical marijuana,” Steven K. Klasko, president and CEO of Jefferson, said in a press release.

Dr. Charles V. Pollack Jr., director of the Lambert Center, suggested that by gathering more patient-reported outcomes, they can add to the list of conditions they already know medical marijuana is effective in treating.

“Current evidence indicates that cannabinoids can be useful in the management of certain types of chronic pain, side effects of chemotherapy and some symptoms of multiple sclerosis—but there is much we still need to learn,” Pollack said.

The announcement comes as Pennsylvania's medical marijuana program finally begins to roll out, with dispensaries opening in the Philadelphia area and across the state.

Pennsylvania also recently became the first state to allow medical marijuana to be used to treat patients suffering from an addiction to opioids, adding it to the list of qualifying conditions.