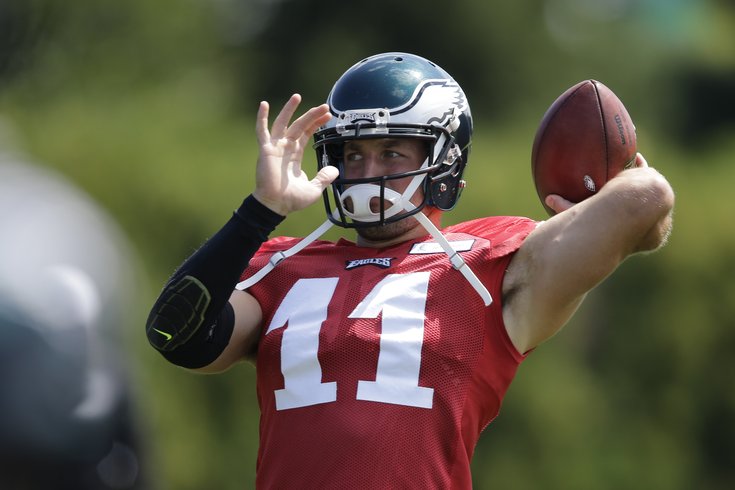 It was at this time last year that Tebowmania had hit Philly, a glorious month of pageviews the likes of which we may never see again. Tim Tebow was battling with Matt Barkley for the third-string quarterback spot with the Eagles, and as it turned out, neither of them got the job.

At the very least, Tebow made the 2015 Eagles training camp and preseason more interesting. And after another season in the analyst chair for ESPN and the SEC Network, he is trying to make another comeback, this time in a different sport.

That’s right, Tim Tebow is going to play baseball. He plans to hold a workout where all 30 MLB teams are invited some time in the next month:

Tebow has trained for the last several months in Scottsdale, Ariz., and Los Angeles at a sport he hasn't played regularly for more than a decade. Tebow has served an ESPN broadcaster since his three-season NFL career ended with the New York Jets at the conclusion of 2012 season.

"This may sound like a publicity stunt, but nothing could be further from the truth," Brodie Van Wagenen, co-head of CAA Baseball, said in a statement provided to USA TODAY Sports and other outlets. "I have seen Tim’s workouts and people inside and outside the industry – scouts, executives, players and fans – will be impressed by his talent. As an agent, I have a genuine respect for how hard it is to succeed at the game of baseball and a true admiration for those who possess the talent to play it at the Major League level. Tim's tool set is real."

Baseball America has a decent write-up about Tebow’s past as a left-handed hitting corner outfielder. Tebow was apparently a good prospect in high school, but he gave the sport up to play quarterback at Florida.

That was over a decade ago, and at 29 years old, Tebow is trying to do what is generally considered the hardest thing in sports (hit major-league pitching) at a high level. It’s going to be really tough, even if Gary Sheffield is impressed and Skip Bayless isn’t betting against him:

I spent time w @TimTebow in the cages recently, he's a NATURAL. I absolutley believe in his ability to play in the bigs. Tim has IT #focused

Tebow has big-leaguel left-handed power. Can he hit big-league pitching? Hardest thing to do in sports. Wouldn't bet against him.

Just to be safe, you probably should send somebody there, Klentak. Worst-case scenario, they’ll have a good story.