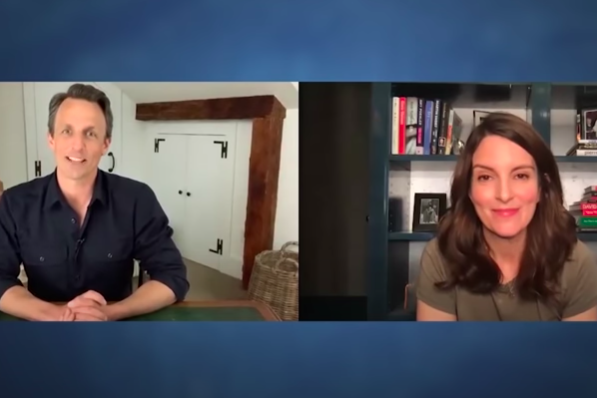 Tina Fey appeared on 'Late Night with Seth Meyers' on Monday night to promote the interactive special for her hit Netflix series, 'The Unbreakable Kimmy Schmidt.'

The Upper Darby native appeared on "Late Night with Seth Meyers" on Monday to promote the interactive special for her Netflix show, "The Unbreakable Kimmy Schmidt."

Meyers noted his former SNL castmate is about to reach her "Sally O'Malley" birthday — a reference to the character, portrayed by Molly Shannon, who wanted the world to know she was 50-years-old.

“I can kick, stretch and kick," Fey said. "And now that I’m about to be that age I realize how incredibly insulting that character is. She’s acting like she’s 100!”

Fey turns 50 on Monday. She told Meyers that she had planned a luxurious trip to an Arizona spa with Maya Rudolph, Amy Poehler, Ana Gasteyer, Rachel Dratch, Emily Spivey and Paula Pell before the coronavirus shut everything down.

"It was going to be like a sequel to 'Wine Country,'" Fey said.

But even though they can't go on the spa trip, the SNL women are still finding ways to get together. Their children organized a Zoom talent show, which included Gasteyer's son, Ulysses, as a magician, and a bi-coastal sketch between Dratch's son, Eli, and Poehler's son, Abel.

"One of them played Elizabeth Warren. It was amazing," Fey said.

Her own 8-year-old daughter, Penelope, performed as a contortionist. But Fey wasn't so keen on that.

“At a time when everyone's home and your main goal is to not go to a doctor, I was like, 'Could you experiment less with your spine right now?'" Fey said. "It was me saying like, 'Step away from YouTube."

Fey then paused to imitate her daughter's response. "'Ok, I’ll put my screen down and try to break myself in half — is that a good plan?'"

The real magic came when Penelope crashed the interview.

Fey asked whether her daughter needed anything. Apparently, she only really needed to make sure the world knows she views her mother and Meyers as losers. As Penelope placed an "L" on her forehead, Fey said, "You're calling me a loser? Get out of here!"

Ah, the beauty of Zoom calls.